Cambridge is the base of Marshall Aerospace, a company specialising in the overhaul and conversion of different aircraft types with a focus on the C-130 Hercules. On a less regular basis, many exotic airlines, bizjet operators and air forces have come to Marshall's to have some work done. Therefore, the field is often worth a quick visit, on the way to Stansted or Mildenhall, for example. Formerly known as Teversham, Cambridge is now commercially dubbed 'Marshall Airport'.

Though the terrain is relatively flat, it does slope down from the field near spot 4, limiting views there. Many of the surrounding roads are lined with trees or buildings, also hampering the view. Near the main entrance, a small passenger terminal and car park are in use, which used to be accessibly for (executive) passengers only until recently.

The easiest way to get to and around this airfield is by car. The approach from the east (Mildenhall/Newmarket) is via the A14, and exit 35 onto the A1303 towards Cambridge. This will make you enter our map in the upper right corner. From the south (Stansted/Duxford), exit 11 of the M1 can be used to enter the A1309. When approaching the city, turn right onto the A1134 at Trumpington and follow this road to enter the map in the lower left corner. Bus services 111, X11 and X12 from Cambridge to Newmarket and Bury St. Edmunds stop near the main entrance, opposite the Marshalls complex west of spot 2. More information on the airport's website and http://www.travelineeastanglia.org.uk/.

From a crash gate on the east side of the airport almost all aircraft parked outside can be seen. If the hangars at Marshalls are open, any interesting aircraft inside can usually be read off from here. Stored aircraft can often be photographed from this spot.

Newmarket Road crosses the approach lights of runway 23. If any large aircraft are landing from this side, traffic lights are activated, because they can be flying very low! This should offer opportunities for photography, though air traffic is not plentiful. A park & ride area is conveniently located next to the spot.

The terminal area has been significantly modernised and is now accessible via a new airport carpark between the FBO and the main factory entrance on the A1303. In the far left corner there is a metal archway leading to the terminal via a pathway alongside the inner perimeter fence. This gives excellent views to all aircraft on the main ramps and the GA parking. Most movements will taxi past this point using the main taxiway and link "C". There are refreshment vending machines in the arrivals hall.

One or two aircraft may not be visible from the east side. A road here leads to another entrance of Marshall's and through the hedge the aircraft may be identified. Depending on the season this may require some effort!

Along the west side of this short cul-de-sac in front of some houses, one looks straight onto the Marshall's pan outside the hangars. A 400 mm lens will give you a half-frame shot of any Hercules outside. 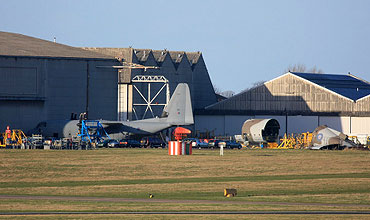 The view on the Marshalls pan from Hatherdene Close. Nowadays, Kings Close i even a bit nearer: spot 4. (Dave Taskis)