Heathrow is Europe's busiest airport, handling more than sixty million passengers and over 440,000 movements a year. It is the home base of the British Airways fleet and a few more of Britain's best known airlines. Almost all of the European airlines visit Heathrow several times a day, as do the main Asian carriers. Since the summer of 2008, most North American airlines have moved to here from Gatwick as well. Among the regular visitors to Heathrow are practically all Arabian VIP aircraft and these tend to stay for longer periods of time, just like they do at Paris-Le Bourget. Other movements of bizjets are quite rare.

There are four terminals at Heathrow and two east-west runways. A cross runway, 05/23, is out of use now.
In between are two terminals, with a third on the southside and the fourth to the west. Terminal 1 is mainly utilised by British airlines and airlines like South African. Terminal 2 was the terminal for almost all European airlines, but closed in November 2009, was demolished and is being rebuilt. At Terminal 3, you can find most of the non-BA long range flights and Virgin. Terminal 4 is the main terminal for Skyteam, while Terminal 5 is exclusively for British Airways. Check the official Heathrow website for details.
Maintenance hangars are inbetween the runways, at the eastern end of the airport.

With westerly winds the runway use is peculiar: until 3PM one runway is used for take offs, the other one for landings. Precisely at 3PM they switch runways, for noise abatement reasons. The scheme can be found on the official website (search for "runway alternation"). With easterly winds they commonly use 09L for landing and 09R for take off the entire day.

The airport is located in the outskirts of London, just 23 kilometres west of the city centre. Unsurprisingly, it can be reached by virtually any means of transportation, both private and public.

The airport is just inside the M25 ring road around greater London. The central area can be reached via a spur off the M4. Terminal Five has its own junction off the M25.

The Piccadilly Line of the London Underground stops at Terminals 1 through 5 and at Hatton Cross. The journey from downtown London takes up to one hour. This is a circle line and trains run in one direction only. This is downtown - Hatton Cross - Terminal 4 - Terminal 1,2 & 3 - Hatton Cross - downtown. For Terminal 5 the stop at Terminal 4 is skipped, so be sure you have the right train.
A faster way is the special train service (the Heathrow Express) from London-Paddington, but beware of the high ticket prices. Journey time is about 20 minutes from Paddington to Terminal 1,2 & 3, and a couple of minutes more to Terminal 5. The slower Heathrow Connect trains serve Paddington - Ealing Broadway - Hayes & Harlington - Terminals 1/2/3 - Terminal 4. The train service between the central terminal area and Terminal 4/5 is free of charge.
A free bus service also runs between the terminals but this can be quite slow during rush hours. Other bus services are also operating from the central bus station in front of Terminal 2 to the neighbouring towns and to central London. Finally, from this bus station and from Terminal 4, the coach services to the other London airports depart.

On top of Terminal Two, there used to be a roof terrace but that is closed nowadays. There are some multi-storey car parks, and some parts of the airport can be seen from the top levels of the carparks, in particular from the one close to Terminal Two.
Note: by June 2012 signs had been placed warning you that loitering and aircraft spotting are not allowed. Camera surveillance means that the local police will visit you soon and ask you to leave. The second time they find you there they will probably be less polite...

There is a perimeter road, but the fence is heavily screened almost everywhere, so views are minimal. However, there are some spots near the underground station of Hatton Cross. Walk out of the station, turn right and cross the A30 road. Then turn right and follow the footpath until you reach a grass field. Here some good quality pictures can be made of aircraft arriving on runway 27L. Be aware: A340-600s need much less than 90 millimeters here, so bring that wide angle lense!

During summer, the sun passes the runway centreline late in the afternoon. But you are still able to take photos of landing aircraft until the sun finally sets. Go out of the Hatton Cross subway station on the north side. On your right side, a bridge crosses Hatton Road. Use this bridge to get an elevated view on the approach to runway 27L. Aircraft appear from behind a building without much notice, so be prepared!

On the other side of the maintenance area, there is a roundabout near the approach of runway 27R. However, the crossing point from the BA maintenance base - east is now closed and the road has been diverted around the outside of the base. Catch a free bus from Hatton Cross towards the Central Area and get off at the nearest stop to the end of 27R to get to spot 4. Good pictures can be made here too (90mm minimum for A340-600s) but beware, the businesses here are anti-spotters, so during working hours you might get sent away. This can be avoided by moving towards the roundabout.

As an alternative for spot 4, when it is cloudy or the sun has transited through the centreline, go to the Premier Inn, through the lobby to the parking lot behind the building. There is a small earth wall you can stand on to photograph aircraft landing on runway 27R. The same bus stop as for spot 4 serves for this spot.

A viewing area is available just outside the airport and is located inbetween Bath Road and the northern perimeter road, in the visitors centre. Being north of the runways the sun is in your face nearly all day, so photographic opportunities are limited here. The bonus is that you can get there by free bus from the central area. Also there are many hotels in de neighbourhood. See section More info on the right for details.

A good place is at the end of 09L on a grass area next to the airport's perimeter road. This place has become more interesting as parking and other amenities are now within a reasonable walking distance following the opening of Terminal Five.

When you get into the car park for Terminal 5, head for the highest level, and the end nearest to the 09R threshold, you can see most of the biz parking, and most of the cargo aircraft.

On the Southern Perimeter road there is a a petrol station (Esso). On the bank behind you can stand nearly perfect for long haul aircraft taking off from runway 27L. You need a lense of about 100-200 mm minimum.
You can get there by car via Bedfont Road (free parking space on Oaks Road in Stanwell) or via Southern Perimeter Road (parking space at Esso petrol station). 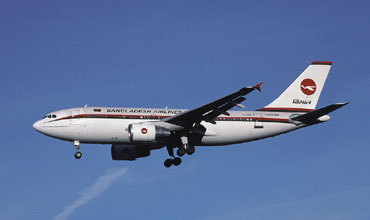 A nice visitor at Heathrow is this Bangladesh Biman A310, photographed at position 2. 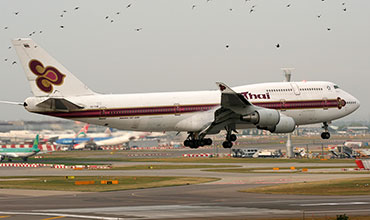 Backlight does not have to be a problem. This Thai 747 was caught over the threshold of 27R, from a position north of the runway between spots 5 and 6. (Michel van Bokhoven)