Once, Southend-on-Sea had a very active airport that played a major role in transporting people and cargo between the UK and continental Europe. The older aviation enthusiasts probably still remember the British Air Ferries Carvairs! However, many other airlines used to fly from Southend with types like Vickers Viscounts, Handley Page Heralds and Bristol Freighters.

Most activity nowadays is from the maintenance and painting companies, and of course the local flying clubs. Maintenance is performed by Lasham ATC, which specializes in older Boeing types, such as the 707, 727 and 737. Their hangars are at the south side of the airport, near the terminal. Air Livery has two painting bays next to Lasham ATC. They spray any aircraft types up to Boeing 757 size, being restricted by the runway length and the climb-out path (there is a church rather inconveniently located southwest of the airport). However, with the recent runway lengthening these problems may have become something of the past. Other maintenance is performed by RFS (in the Air Livery hangar) and World Aviation Support, that took over the facilities of British World Airlines in the northwest corner of the airport.
With the Olympics in London approaching a lot of building activity has been taking place at the airport. A new train stations was opened in August 2011, and a new terminal with adjoining platform was constructed by spring 2012. Finally, the runway has been extended 300 m to the southwest. The result of all this work should be new scheduled services from the airport, with Aer Arann being the first to kick off. From spring 2012 easyJet has based three A319s at Southend.
Although more daily activity has come to Southend, the aircraft coming here for painting and/or maintenance still remain the most interesting aircraft. Some are stored here for a shorter or longer period. This always makes Southend worth a detour.

Southend-on-Sea is an airfield with just one runway with the several branches nicely spread over the location. The main terminal is situated just southeast of the runway. On the map it is clearly recognisable with the large apron in front of it. In the east of the airfield is the general aviation located, while in the west-northwest, opposite of the runway, the aircraft maintenance is situated. The old disused runway, that crosses, the current runway is now mainly used for storage of aircraft.

Most visitors with a car will probably arrive via the A127 from London. Just follow the signs to the terminal and use the map to get to the other vantage points.

With the construction of the new terminal, a train station was also built on the line along the eastern perimeter of the airport. This connects the airport with London's Liverpool Street Station. In addition, several busses from Southend Central Station and Southend Victoria Station pass the terminal.

At the south side of the airport there is the small, old terminal building. To the right of the building is the General Aviation park. Here the smaller visitors are parked and a part of the local private aircraft. Usually also some of the heavy stored jets are parked here.

Continuing past the General Aviation park you will end up at the Willowair Flying Club and Seawing Flying Club. Also the Vulcan XL426 being restored by the Vulcan Restoration Trust was parked here. Due to the new terminal views over the airfield are impaired, but there are still quite a few gaps on either end of the terminals to read off the aircraft outside the maintenance hangars.

Driving or walking west from the terminal takes you behind the Heavylift and Air Livery hangars. Sometimes the gaps between the hangars allow an aircraft to be identified that was not visible from the Eastern Perimeter. At the end of the road the Southend Flying Club is located. Aircraft parked at the western end of the Heavylift apron can be photographed from here (if you're lucky enough that nothing is in the way). In addition to the Eastern Perimeter point, this is the best spot to read off the stored aircraft in the middle of the field. Note that some aircraft may disappear somewhat behind a hill.

Go clockwise around the airfield on Eastwoodbury road, passing the threshold of runway 06. After that, make a right into aviation way to reach the northern part of the airfield. This is the old British World (and thus British Air Ferries) maintenance facility. A lot of small companies are located here who are performing overhaul to the whole aircraft or just avionics. Photography is a bit tricky here because aircraft are often being parked close to the fence or there is equipment blocking the view. Still you would not want to miss this spot, since many aircraft are not visible from the south side. 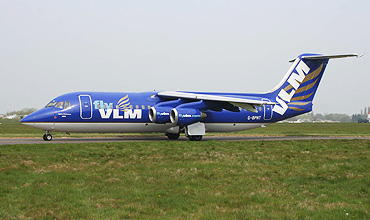