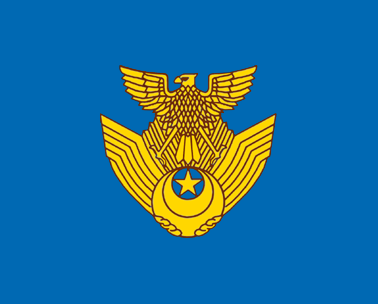 Formation
In 1954 the parliament approved the Self-Defence Law and therefore the Hoancho was replaced by the Boeicho (Defence Agency) which was formed to control the three military services we still know today. The two other Self-Defense Forces were re-organized existing organisations (see pre-1954 aviation units), however the Nihon Koku Jietai (Japanese Air Self-Defense Force) was newly established on 1st July 1954, making it the country's first independent air arm. Its first equipment ten Beechcraft T-34A Mentors acquired from the old Hoantai, forming the core of the nowadays Nihon Koku Jietai. 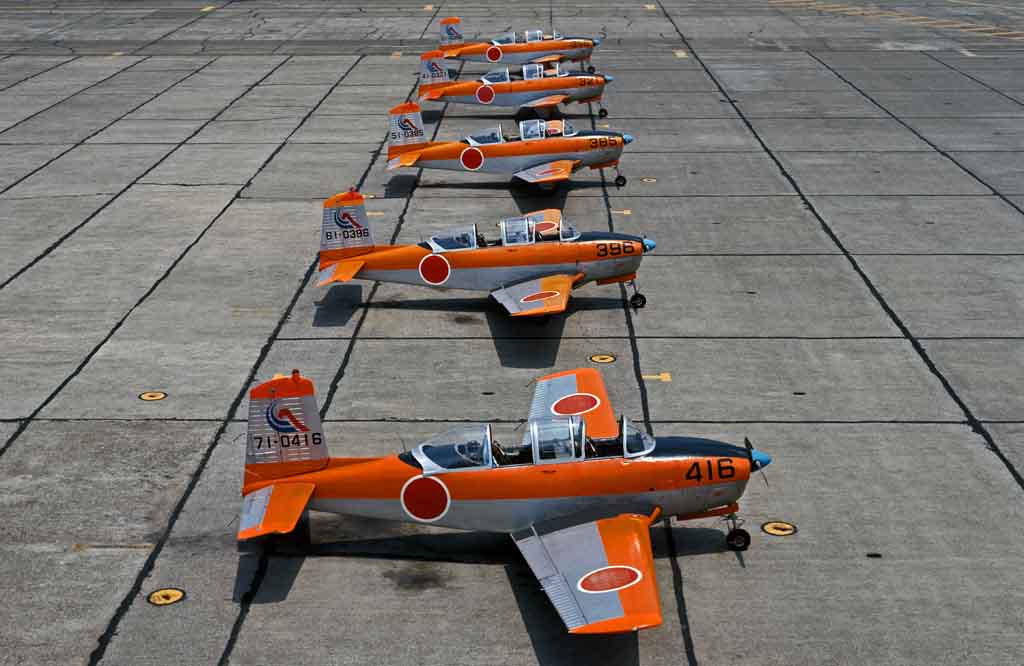 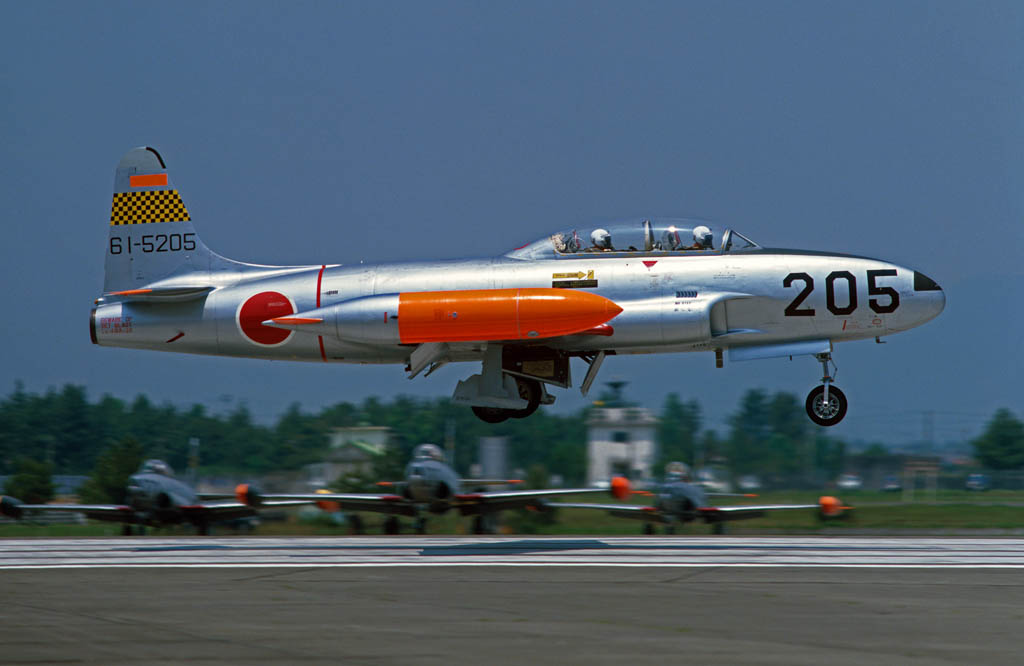 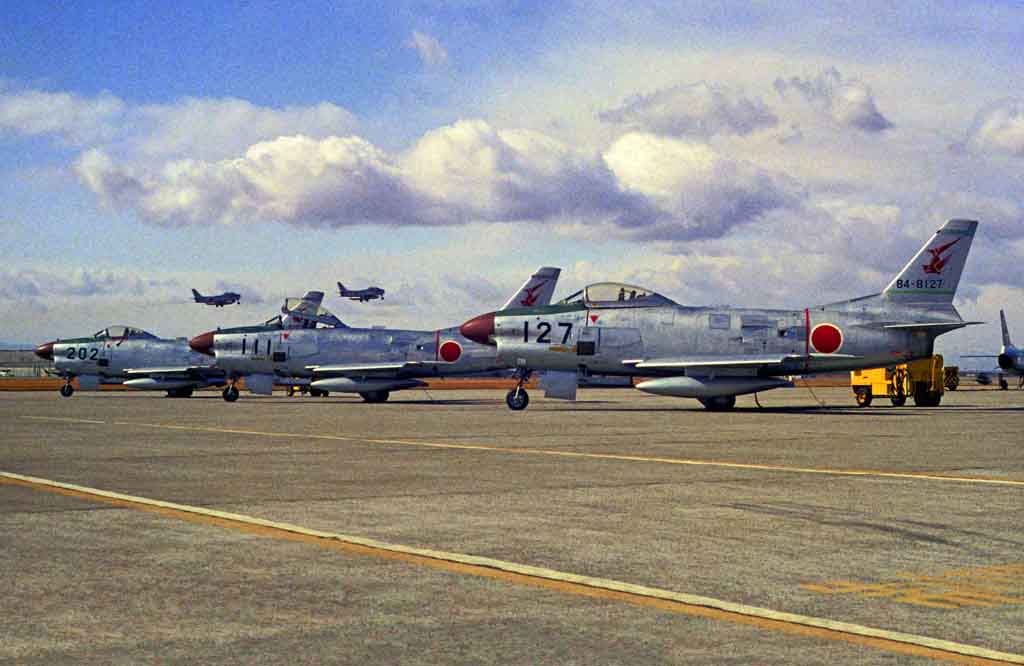 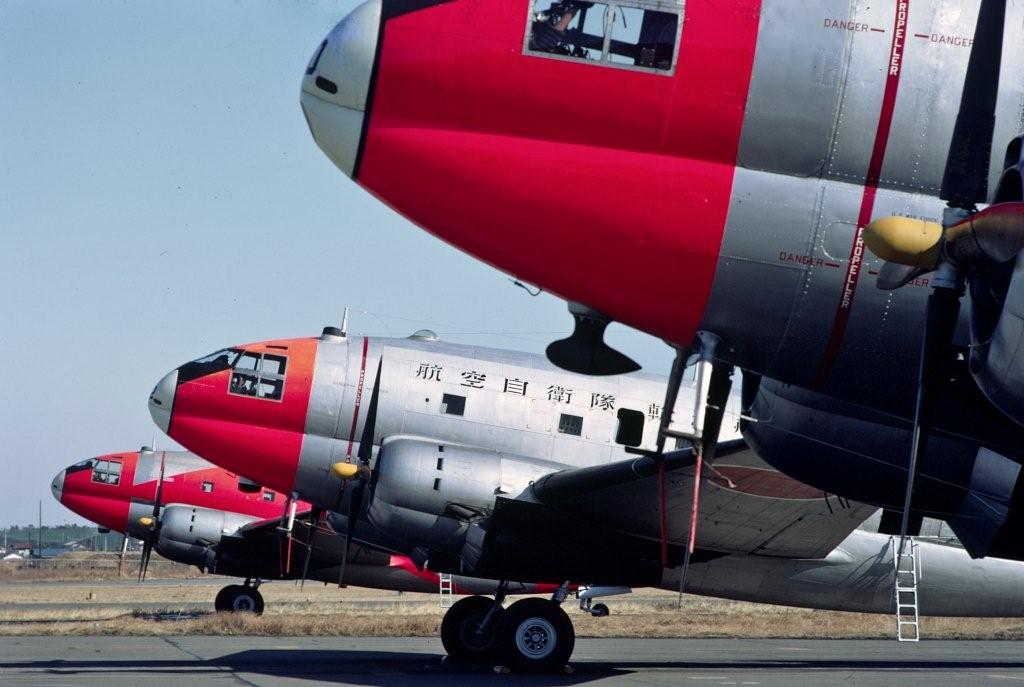 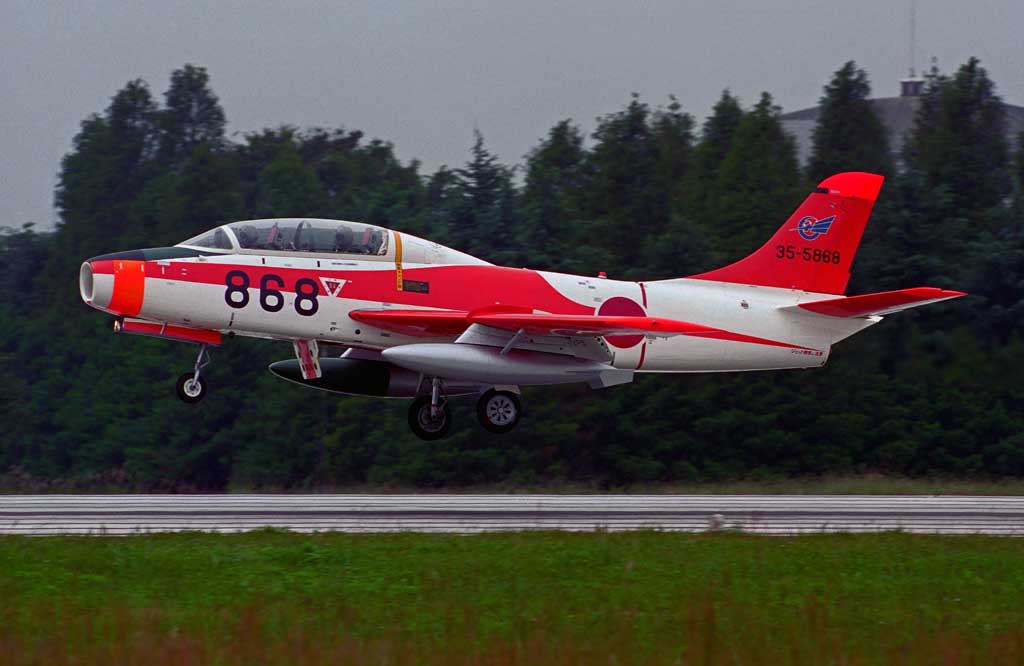 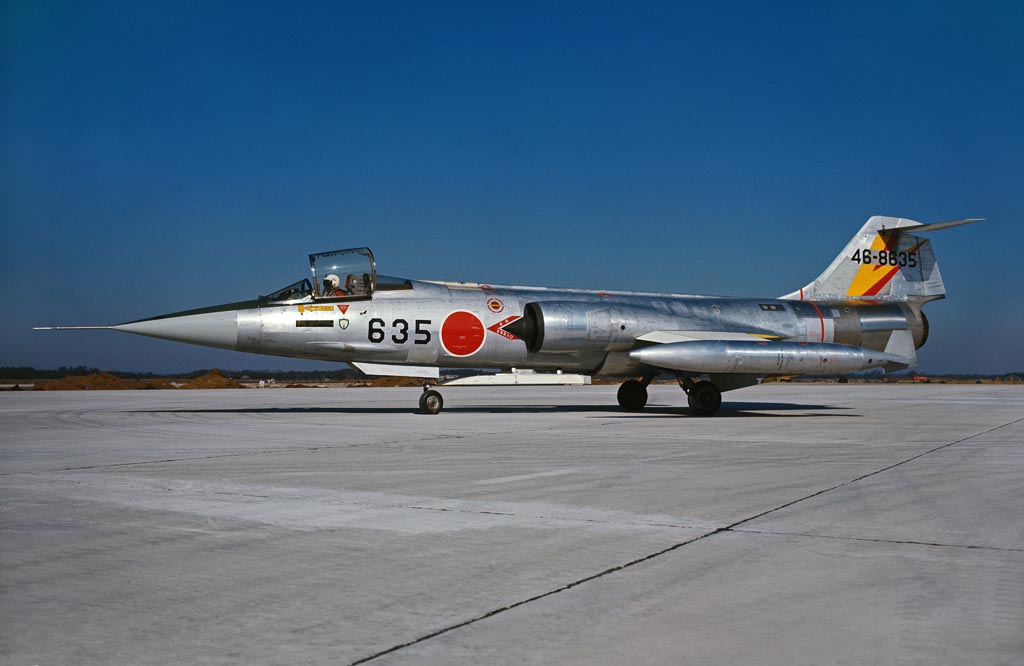 Beginning
The large need for pilots and support personnel resulted in the establishment of a Sojyu Gakko (Flying School) on 6th July 1954, based at Hamamatsu airbase, equipped with the ten Beechcraft T-34A Mentors. This type was selected as the force's standard primary trainer, and the original ten were later supplemented with 124 additional aircraft licence built by Fuji Heavy Industries. In 1955 the NKJ received its first aircraft out of American stocks. These aircraft comprised numbers of North American T-6 Texans, acting as the standard advanced trainer and in anticipation of jet fighters, Lockheed T-33s as the standard jet trainer. All these training aircraft equiped seven Hiko Kyoikudans (Flying Training Wings). Curtis C-46 Commandos were received and a modest transport fleet was set up, initially at Tachikawa before moving to Miho as the Yuso Kokudan (Air Transport Wing). The first fighters were delivered in December 1955 when a number of F-86F Sabre fighters arrived in Japan. The delivery of these F-86s coincided with the establishment of the Kokudan (Air Wing) at Hamamatsu airbase, eventually forming the 1st and 2nd Hikotai (Squadron) within it, both equipped with F-86F Sabres. As more types were entering the inventory, an operational test and evaluation unit was also activated at Hamamatsu in December 1955, the Jikken Kokutai (Air Proving Group). At the end of 1956 the air force had 96 T-34 Mentors, 130 T-6 Texans, 68 T-33 T-birds, 8 F-86F Sabres and 24 C-46 Commandos on strength as well as one Kawasaki KAL-2 being the first post WW2 Japanese designed aircraft. The F-86F Sabre was to become the primary JASDF fighter and was also built by Mitsubishi, first examples completed in Japan were delivered September 1956. As the number of Sabres increased, more Kokudans were activated and the original Kokudan became 1st Kokudan, still acting as a conversion training unit. 2nd Kokudan was formed at Hamamatsu in October 1956 with a single F-86F squadron, the 3rd Hikotai. First JASDF rotary equipment was the Sikorsky H-19, first examples arrived in 1957 and these became part of Rinji Kyunan Kokutai (Provisional Air Rescue Squadron) in March 1958, together with T-6 and T-34 aircraft. The F-86D Sabre all-weather fighter was introduced January 1958, ultimately forming four Hikotais in 3rd Kokudan. The Hiko Tenkentai (Flight Check Group) was formed October 1958, equiped with modified C-46 Commandos. The contours of the JASDF we know today were becoming very visible.With the delivery of Sabres coming up to speed, more Kokudans were formed so the original Kokudan was renamed as 1st Kokudan.AsAaaaWith the delivery of Sabres coming up to speed, more Kokudans were formed so the original Kokudan was renamed as 1st Kokudan.

Sixties
During the second half of the nineteen fifties and early nineteen sixties, the NKJ expanded to a sizeable air force with the backbone being formed by 180 US built and 300 Mitsubishi built F-86Fs. These, together with F-86D all weather interceptors formed six Kokudans in the Koku Sotai (Air Defence Command) and one Kokudan in Hiko Kyoiku Shudan (Flying Training Command). Initial numbering of the fighter Hikotais was fairly straightforward as every type had its own sequence. Numbers 1 to 10 Hikotai were F-86F squadrons, 101 to 105 Hikotai were F-86D squadrons. With the introduction of new types into service, a new sequence was started and old units were simply disbanded. One of the elements still missing, a tactical reconnaissance unit was established December 1961 when 501 Hikotai was activated at Matsushima, flying converted Sabres designated RF-86F. During the beginning of the nineteen sixties the fleet of T-6 Texans was gradually being replaced by the locally developed Fuji T-1. The Kyunan Kokutai (Air Rescue Squadron) expanded considerably with deliveries of new helicopters, H-21Bs arriving in 1960 and Mitsubishi built S-62Js in 1963 and was upgraded to group status, becoming the Koku Kyunangun. In 1962 a new era started for the NKJ when the Lockheed F-104J Starfighter was selected as the successor to the F-86 Sabre in the air defence role. Between 1962 and 1967 210 Mitsubishi F-104J and 20 F-104DJ Starfighters were delivered equipping seven squadrons, 201 to 207 Hikotai. Surplus F-86F Sabres formed yet another Kokudan and two new Kokutais, so when the last F-104J Hikotai was formed in 1966, the NKJ had eighteen Hikotais in the Koku Sotai. An ECM Training Flight, the Denshi Kunrentai was formed at Kisarazu in 1964, part of Koku Sotai Shireibu Hikotai (HQ Squadron) and it operated a few converted C-46 Commandos. During the end of the sixties the first Kawasaki KV-107s were taken on charge as a replacement for the H-19 and H-21 and also entering service around that time was the Mitsubishi MU-2, replacing the last T-6s and T-34s in rescue service. Already the JASDF was thinking about a successor to the Starfighter and in 1968, the McDonnell F-4E was selected.

Seventies
July 1971 saw the start of F-4EJ deliveries, the type ultimately equipping six squadrons, 301 to 306 Hikotai. The seventies also saw the development and introduction of a number of indigenous aircraft types, of which only the Kawasaki C-1, which succeeded the ageing fleet of C-46 Commandos, and the NAMC YS-11 still can be seen on the inventory today. The Mitsubishi T-2 replaced the last F-86Fs in the advanced training role, two squadrons were activated, 21 and 22 Hikotai.  RF-4EJs replaced the RF-86F in 501 Hikotai service, last recce Sabres leaving the unit in 1977. That same year saw the first flight of the first Mitsubishi designed fighter, the F-1, and this T-2 variant replaced the last F-86F Sabres in the tactical fighter role. The practise of starting a new sequence with the introduction of a new type was discontinued with the introduction of this aircraft, former Sabre units 3, 6 and 8 Hikotai retained their unit number. The Fuji T-3 replaced the T-34 in the primary training role and re-equipped 11 and 12 Hiko Kyoikudan. In 1977 the F-15J was already selected as the successor to the F-4EJ fleet for which deliveries were not even completed by that time!

Eighties to present
During the first half of the nineteen eighties the NKJ retired the last C-46s, T-34s and F-86s and deliveries of the F-15J started in earnest. First Hikotai re-equipped with the Eagle was 202 Hikotai at Nyutabaru in December 1981, followed by 203 Hikotai at Chitose and 204 Hikotai at Nyutabaru, all units previously F-104 operators. One of the last elements still missing, an aggressor squadron, was activated December 1981 at Tsuiki and used five Mitsubishi T-2s. Hiko Kyodotai moved to its current base Nyutabaru in March 1983. Also activated in this decade was the Rinji Keikai Kokutai (Provisional Airborne Early Warning Group) with one squadron, 601 Hikotai operating the E-2 Hawkeye from Misawa. The C-130 Hercules was ordered to supplement the Kawasaki C-1 and re-equipped 401 Hikotai, its C-1s being transferred to the other units. A big advantage of the C-130 over the C-1 is its ability to fly fully loaded from the Tokyo region to Okinawa non-stop, where as the C-1 needs a fuel-stop at Tsuiki or Nyuatabaru. The nineties and first part of the new decade saw the retirement of the fleet of T-33s and T-1s by Kawasaki T-4s, the KV 107 by the UH-60J and CH-47J, the Mu-2 by the U-125, the Beech 65 by the U-4 Gulfstream, the T-3 by the T-7 and the Mitsubishi F-1 and T-2 by the Mitsubishi F-2. One of the last units newly established was 701 Hikotai, the dedicated VIP transport squadron operating the Boeing 747-400. These aircraft were untill recently the only ones seen abroad on a regular basis but Japan is now progressively more active outside its own borders, helping out on disaster relief flights and also joining multi-nation exercises such as Cope Thunder. Therefore Japan introduced tanker aircraft in the form of KC-767s (404 Hikotai) and also modifying C-130s into the tanker role. All future UH-60Js will have air to air refuelling capabilities. Mid 2012, Japan decided on the successor of the remaining F-4EJs and chose the Lockheed-Martin F-35, to be licence built by Mitsubishi. Future F-35 base will be Misawa.

Serial Number System
JASDF serial numbers are made up of six digits, a two-digit prefix followed by a four-digit number. Besides denoting a particular aircraft, it also gives its type, role and year of procurement.

The first digit of the prefix indicates the year (Western calendar) it was delivered, for example F-2A 13-8508 was delivered in 2001. (This particular aircraft made its first flight in 2000 and was also supposed to be delivered in that year, so serial 03-8508 was applied, however testing took longer then anticipated and delivery slipped into the new year and it was subsequently re-serialled as 13-8508).

The second digit of the prefix denotes the type, allocated within four basic categories, as follows:

The first digit of the four-digit number indicates the basic aircraft role, as follows:

The final three digits are the aircraft's individual number. So, serial 48-1004 allocated to a C-1 can be decoded as: