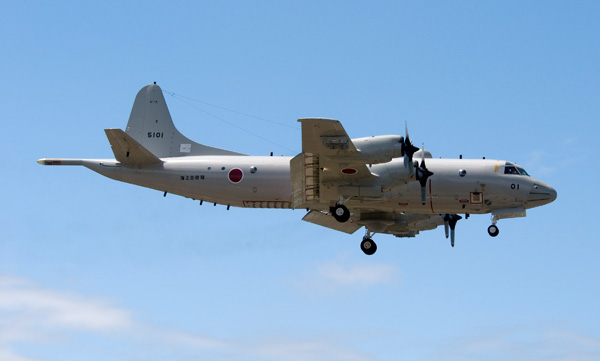 Not the most interesting photo, this 3 Kokutai Orion, but the P-3C is the most numerous type in service with the JMSDF. Unfortunately the Orions lost their colourful squadron markings starting shortly after the turn of the century. Until recently nine operational squadrons as well as one test squadron (51 Kokutai) and one training squadron (203 Kyoiku Kokutai) operated the P-3, however one (8 Kokutai) was disbanded in March 2001. Following the reorganisations that took place in March 2008 only four frontline P-3 squadrons remain. 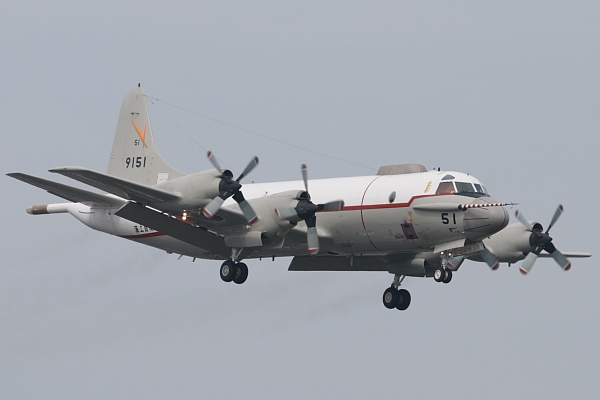 Much more interesting is this one of a kind UP-3C operated by 51 Kokutai for all sorts of test and evaluation flights. The dedicated test squadron is also operating a handful of normal Orions but this special version is the most colourful and the only one marked with the finflash of 51 Kokutai. 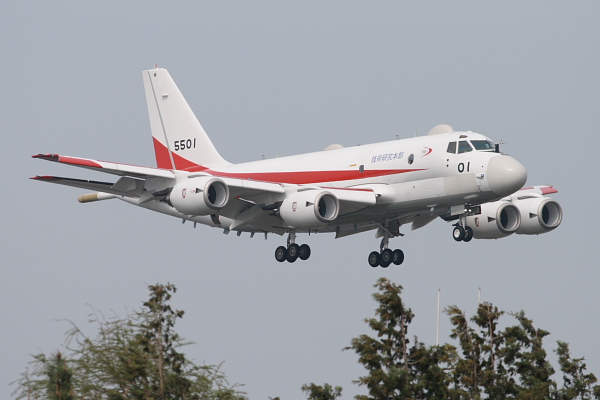 The first XP-1 in a red/white colour-scheme which is usual for all Japanese prototypes. During the first half of 2015 it was modified to UP-1 configuration and re-serialled 9501. 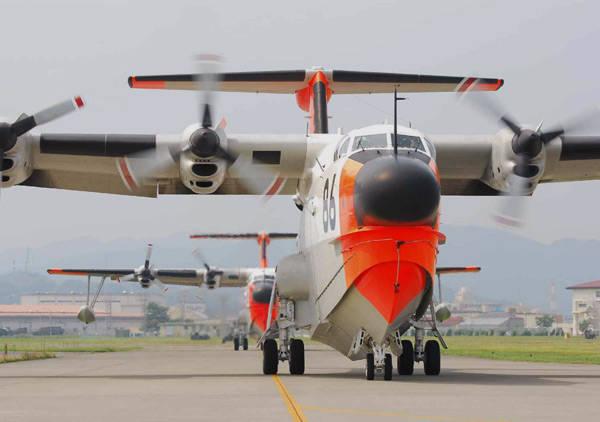 A unique and very impressing aircraft in the JMSDF was the Shin Maywa US-1A flying boat. The US-1A is the Search and Rescue variant of the PS-1 ASW flying boat. Twenty US-1s have been procured between 1975 and 2000 serving with the 71 Kokutai at Iwakuni which was formed on 1 July 1976. The eighth newest US-1s were in service at any given time. The US-1A is fully replaced by the US-2 which is a modernised US-1. Five have been constructed to date. The last US-1A was retired in December 2017. 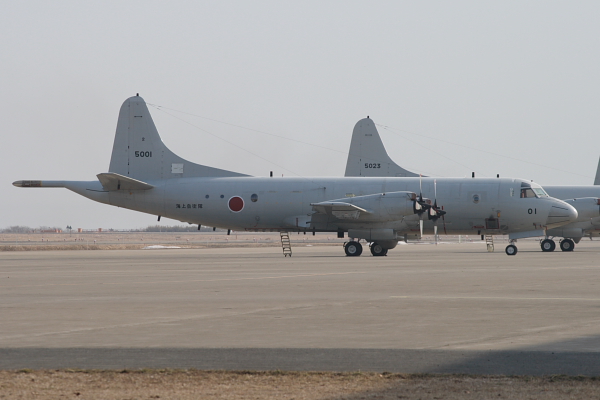 Two other boring grey Orions, in front 5001, the first ever JMSDF Orion with 2 Kokutai marks and next to it an unmarked example. The first three are real Lockheed Orions, built in the States, all other Japanese versions were manufactured under licence by Kawasaki at Gifu and with their own construction number range. In October 2009, the JMSDF lost only their second Orion and this time not due to a crash but by their own hands. 5002 was brutaly broken up at Atsugi after being withdrawn from use in April. Overhaul is performed at Gifu and a handful of unmarked examples is allways present. 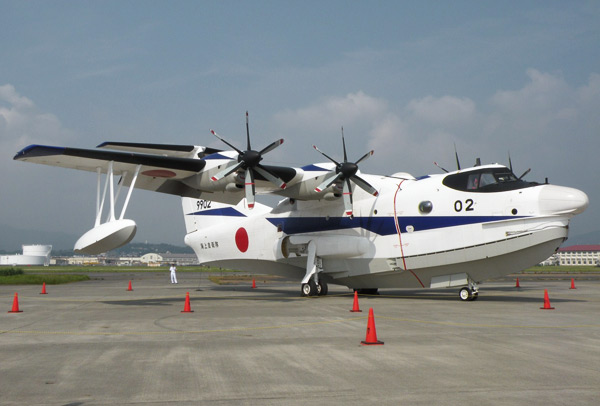 The replacement for the US-1A. Originally flown as the US-1A Kai, a modernised version of the original, it is now in low rate production as the US-2. This example is the second frame and pictured here still in test colour scheme. The first one had the "standard" red/white prototype scheme but today all US-2s are in the midnight blue c/s, making it a little less impressive in my opinion. 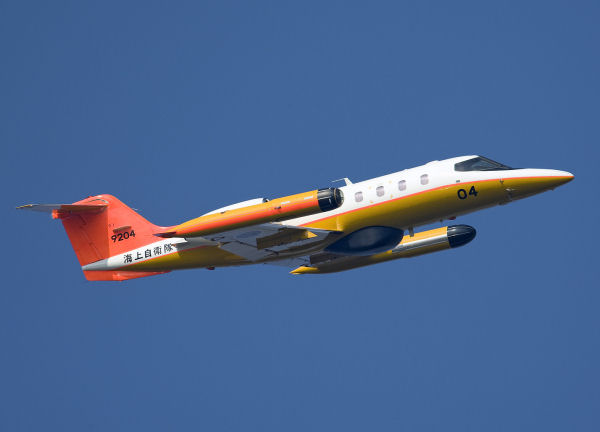 The Japanese Navy acquired six Learjet 36s in the period 1988-1993 for target duties, two examples were lost in accidents since. The four remaining U-36As are part of the mixed fleet of 91 Kokutai, the other type being the UP-3D Orion. 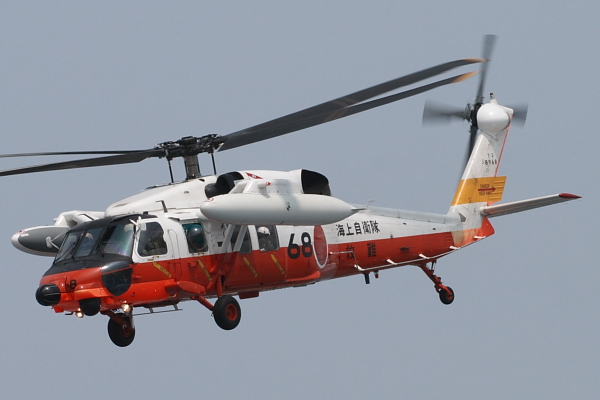 The Mitsubishi UH-60J replaced the S-61AH as the dedicated Search and Rescue helicopter with, initially, six Kyunan Hikotai (Air Base Squadrons)at the JMSDF main bases. However, following the March 2008 and April 2018 reorganisations, only four Hikotais remain. The JMSDF will not replace its UH-60J and future SAR ops will be the responsibility of the JASDF and JCG. 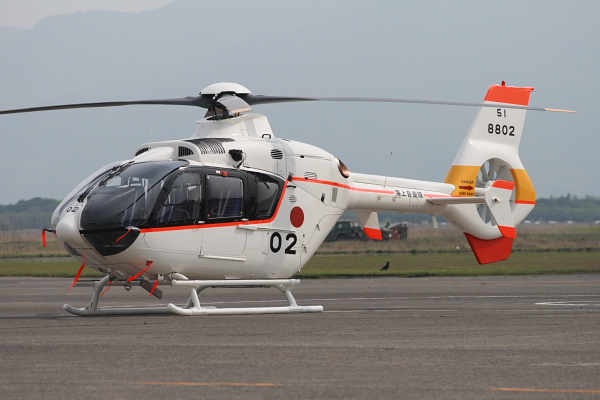 The replacement for the OH-6D/DA is this Eurocopter EC-135 named TH-135 in Japanese service. As can be seen on the tail, it was still on strength of 51 Kokutai, the dedicated test squadron but operating from Kanoya in preparation for transfer. By October 2010, the first TH-135 was seen operating with 211 Kyoiku Kokutai markings and end 2015, all fifteen had been delivered. 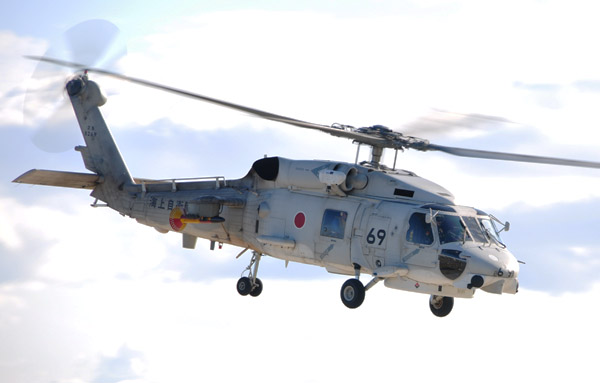 Seen departing Komaki at the end of the Open Day is this 23 Kokutai SH-60J, heading for home at Maizuru, a base rarely visited by spotters as it is a bit off the beaten track. 23 Kokutai is the third unit to transition to the SH-60K. SH-60J operations ended in March 2015. The SH-60J in this picture is in the 'new' overall grey colour scheme as opposed to the original 'old' white/grey colours. 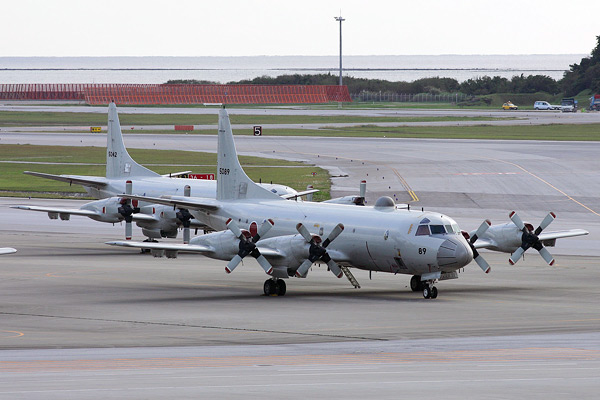 The visitors terrace at Naha is a good spot to get most of the based 5 Kokutai Orions. The loss of their colourful tailmarkings make these aircraft a lot less atractive, some even say 'you've seen one you've seen them all' but this is not entirely true. The JMSDF operates the P-3C with at least two different modifications besides the standard version. As can be seen on this photo, the 5089 has a big bulge on the top of the fuselage. Another mod. has a smaller bulge on the same place and some remain, at least on the outside in the old configuration. 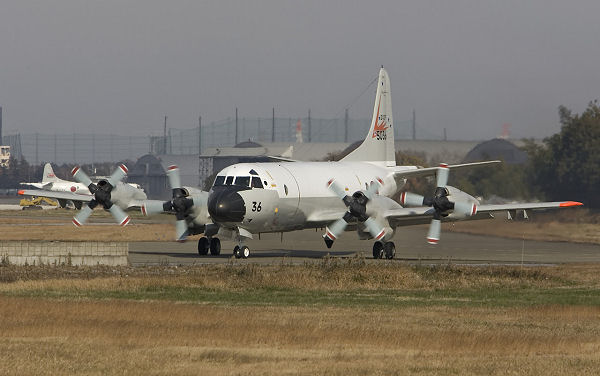 One of the last Orion units with some distinctive tail markings was the training squadron 203 Kokutai. Unfortunately it also lost the finflash during 2011. 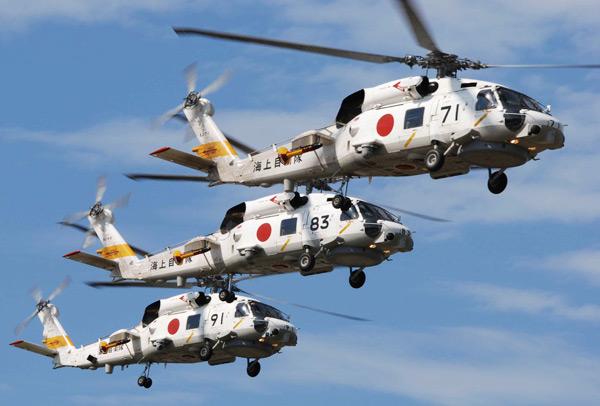 The SH-60J was the successor of the HSS-2B in the ship borne ASW role. Currently the fleet of SH-60Js is partially replaced by the SH-60K. Five Kokutais are equipped with the Seahawk being the 21 Kokutai at Tateyama, 22 Kokutai at Omura, 23 Kokutai at Manazuru, 24 Kokutai at Komatsushima and 25 Kokutai at Ominato. This three-shipper was performing at the Tateyama open day of 2008 and are all in the old colour scheme. 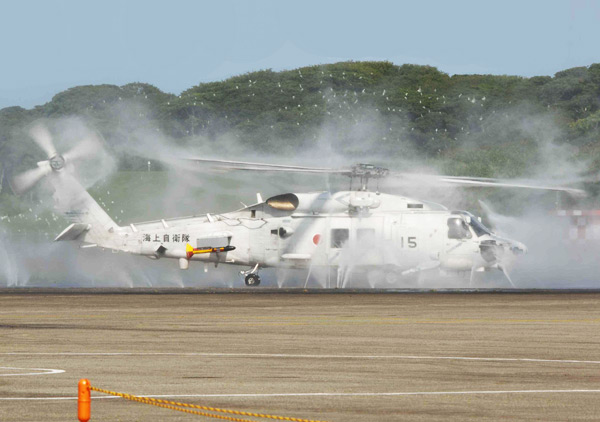 The first operational unit to receive the SH-60K during 2006 was 121 Kokutai, now part of 21 Kokutai. This one is receiving the cold shower treatment to get rid of any salty deposits. The white herons in the trees in the background probably see this scene everyday. 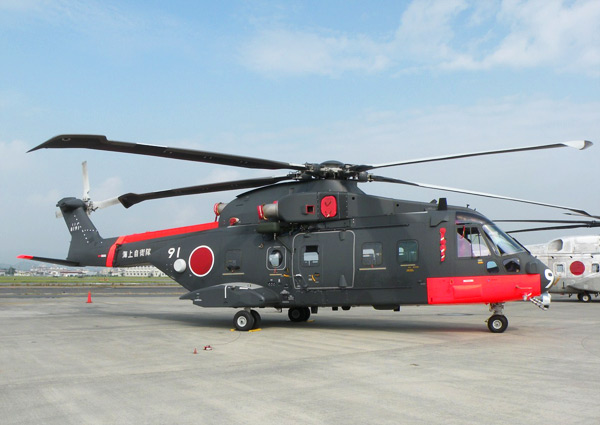 To maintain a presence in the Arctic regions, Japan regularly sends its Polar Icebreaker Shirase to those shores. AGB-5003 is the third ship with that name, commissioned last year and is able to carry two CH-101s. Its predecessor, the S-61A was retired in 2008 and was operating with 21 Kokutai at Tateyama when not aboard the Chirase, the CH-101 is flying from Iwakuni with 111 Kokutai.