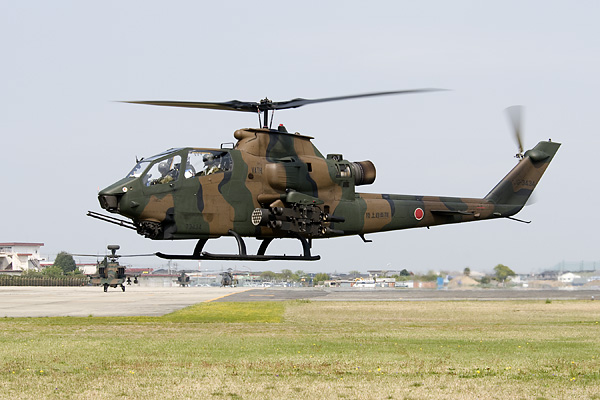 Japanese muscle at Akeno where this 5th Anti-Tank Helicopterunit Cobra is stationed. 92 AH-1S Cobras have served the JGSDF of which about 80 remain active today. Beside the write offs, a number of Cobras is stored inside the Kanto Depot at Kasumigaura. 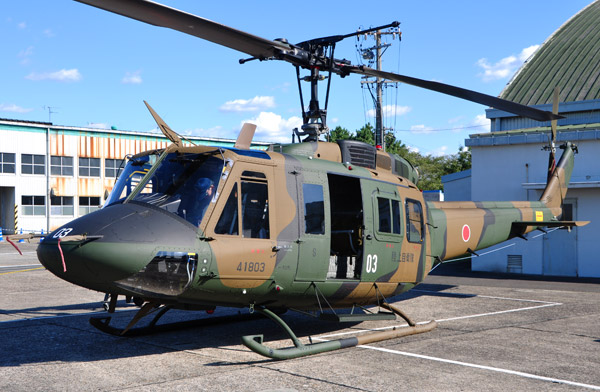 The UH-1J on this picture is the third Huey variant in use with the JGSDF. 90 UH-1Bs and 133 UH-1Hs preceded this latest variant which was developed by Fuji Heavy Industries. Production stopped in 2012 after building 130 examples. Both earlier variants have been completely retired. The UH-1J in the picture is operated by the Koku Gakko at Akeno, indicated by the code S on the cabin door. All training helicopters have the last two or three of the serial in white on nose and fuselage. 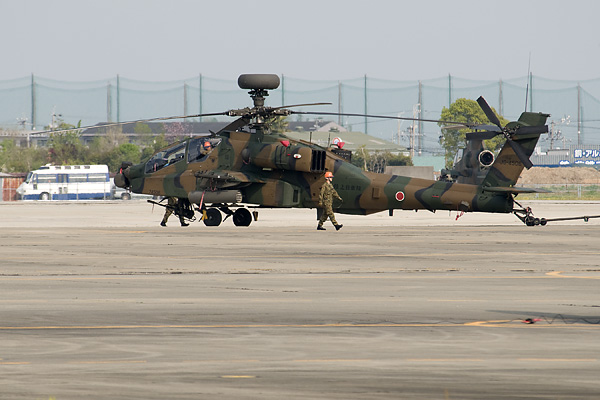 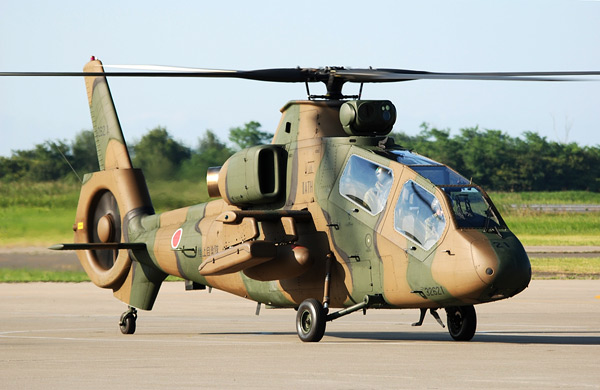 Developed and build by Kawasaki at Gifu, the OH-1 Ninja has fully replaced the OH-6D in the observation role within the HQ flights of the Anti-Tank Helicopter squadrons and the various HQ flights of the Army Aviation squadrons. However the crash of a Ninja in February 2015 resulted in the grounding of the type and only by the end of 2019, some returned to flying status. 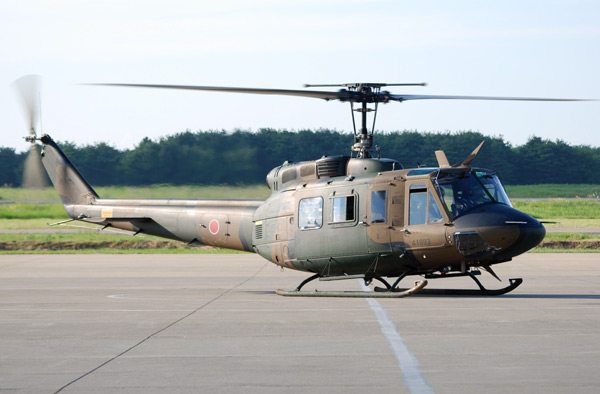 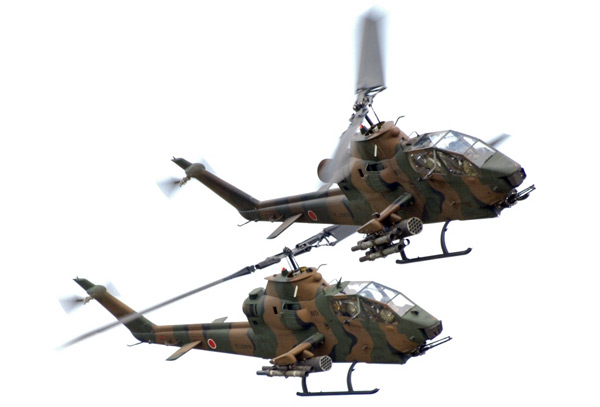 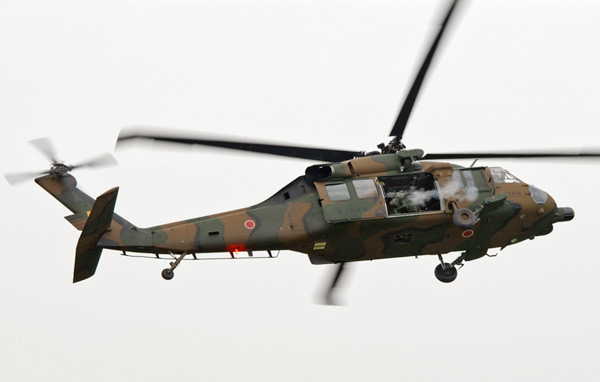 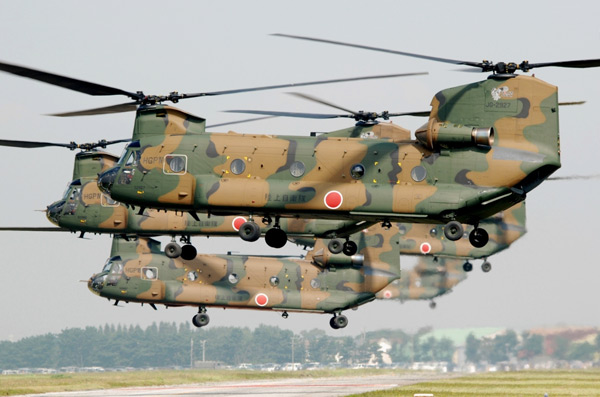 The successor for the KV-107 in the JGSDF is the CH-47J and CH-47JA Chinook. Pictured is a CH-47J of which 34 were delivered from about 1986 onwards until superseded by the CH-47JA. This 104 Hikotai aircraft seen departing to form the annual mass flight pass has the new flying owl badge. 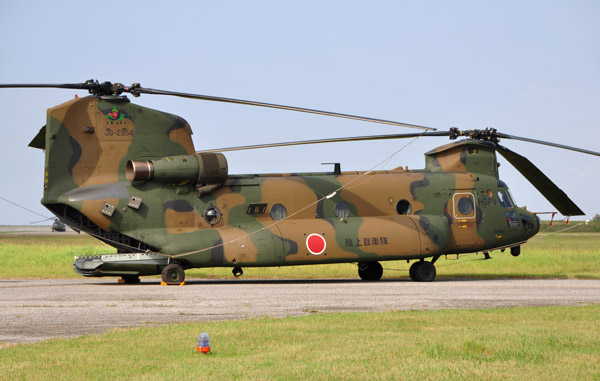 CH-47JA production started in the early nineties and deliveries continue to date with more than twenty delivered by early 2009. This Chinook version is equiped with a weather radar nose and the larger side pods. The 'HGPV' indicates that the aircraft on this picture is on strength of 105 Hikotai. The AKAGI badge does have some similarity with the long-nosed goblin head on the 304 Hikotai badge. 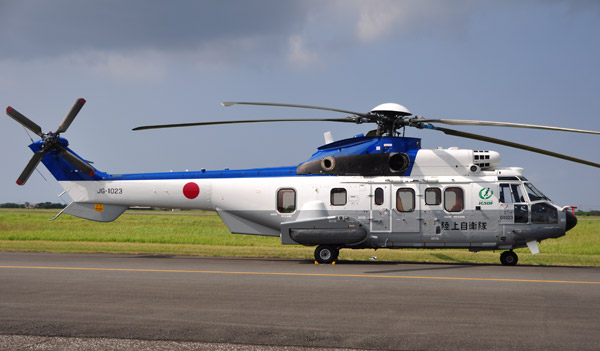 Three EC-225LPs are operated by the Tokubetsu Yuso Hikotai at Kisarazu. The helicopters replaced the AS-332L in 2007 and are tasked with the transportation of VIPs. The original Super Pumas are now stored in the Kanto Depot at Kasumigaura, awaiting sale.

We believe 3 Hikotai 'Kingfishers' was disbanded or renamed and all assets taken over by 109 Hikotai. 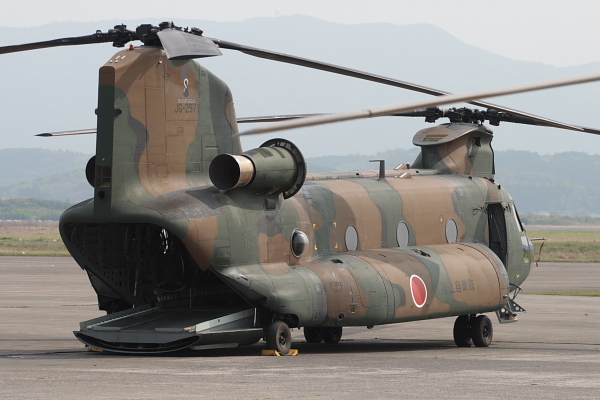 Home for this Chinook is Takayubaru, part of the civil Kumamoto airport. It belongs to 3 Hikotai of the Seibu Homen Herikoputatai. This unit has three Hikotais, 1 and 2 Hikotai reside at main base Metabaru. 3 Hikotai was the last unit in the JGSDF to operate the KV-107 and replaced it with the CH-47JA. Co-based at the military side is 8 Hikotai, a unit not part of Seibu Homen Herikoputatai as it is the HQ flight of 8 Shidan.


Possibly also CH-47JAs will be assigned. 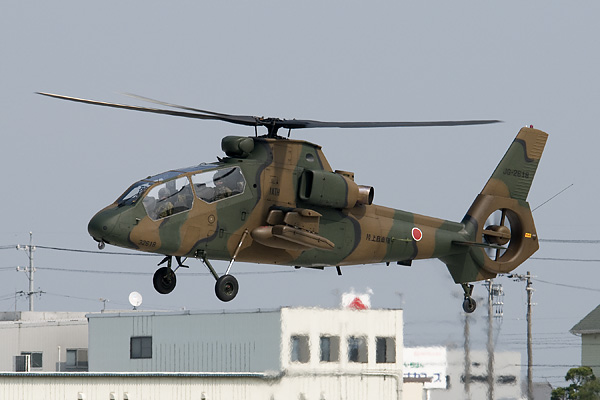 Only 38 Kawasaki OH-1 Ninjas have been built, production was halted by 2013. Further developements, such as a proposed AH-2 attack version was also stopped. 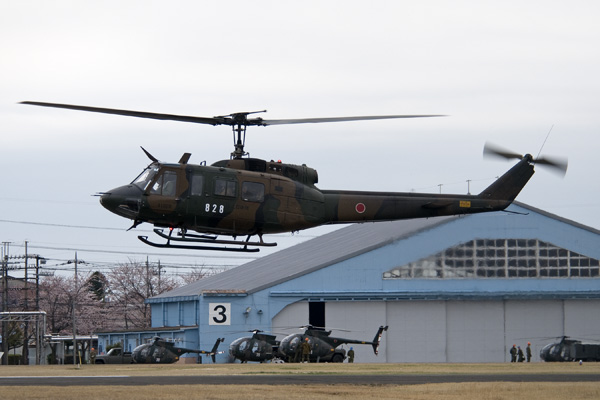 The large white '828' on the cabin door, the last three of its full serial 41828, is indicating a training aircraft, this one operating with Utsunomiya Kou. It seems this unit is no longer applying its black SU code on the fuselage of the Huey.