After the II World War, many air forces in West-Europe started again with training of their pilots and needed a big airport with wide air spaces and free ground surfaces with good weather during all the year. At the end the final choice was for the airport of Decimomannu on Sardinia island. Decimomannu air base is the home of the Air Combat Manoeuvring Instrumentation (ACMI) range, called the "Air Weapons Training Installation" (AWTI). Established in 1960 by the NATO partnership of Italy, Germany, Great Britain and Canada, the ACMI range complex includes computer monitored airspace for the practice of dissimilar air combact training (DACT) and manned, scorable bombing range (Frasca Range). During 1970 Canada was replaced as a partner by the USA and Royal Air Force. At this moment, Italian Air Force and German Air Force are the main air forces in Deci, but several visitors organize their deployments during the year, thanks to the favourite weather and modern ranges for air to air and air to ground training.

The airport is located east of the SS196. The runway is almost north-south orientated, and all aprons are on the west side, between the Ss196 and the runway. The is a helicopter apron on the NW side and a large freighter apron on the SW side.

The airbase is situated at North of Cagliari, between the villages of Decimomannu, Decimoputzu, San Sperate and Villasor. It can be reached from Cagliari via the SS130 which runs also along the airport. In Decimomannu, change to the SS196 towards Villasor and the airport will be at your right. The airport of Cagliari has many flights from mainland of Europe, operated by Ryanair, easyJet, Alitalia and Air Berlin. The other airport at Sardinia, Alghero is operated by Ryanair as well, but is 160 nm away from the base.

Around The Airport
1
Runway 35, afternoon

From spot 1, follow the dirt road along the fence towards the river. Now follow it along the river and take a good position, for instance at the river bank, staying clear of the trees.

3
View onto the apron

From spot 3 you will have a good view onto the aprons. Follow the SS196 towards Villasor. In Villasor, take the SP7 towards San Sperate. At a crossroad, take the SP4 and follow it until there is a road to the right leading to the gate and look upon the apron.

Landing shots can also be made at the north side of the airbase. Follow the SS196 towards Villasor. In Villasor, take the SP7 towards San Sperate. At a crossroad, take the SP4 towards the runway. At the fence, take a right and position yourself near the road.

For spot 5, you have to drive from Decomomannu onto the SS196 towards Villasor. After passing the main gate, take the first road to the right, along the fence. Follow it towards Villasor, but take the next right back to the airport. Along this road, you will have a view onto the apron. If you drive back, you will find a dirt road along a small stream which will go to spot 4. Here you will have a view onto the helicopter apron.

Along the SS196 is the main entrance to the Decimomannu air base. At the main entrance, at the parking before the gate, you will find a nicely preserved Starfighter. behind the gate, there are some gate guards such as a german F-104, a british Harrier and italian T-33 and MB-326.

Another spot will give you a view onto the south apron, to make these last numbers. From the gate, spot 5, drive back to Decimomannu, take the second left and drive via dirt roads towards the fence. 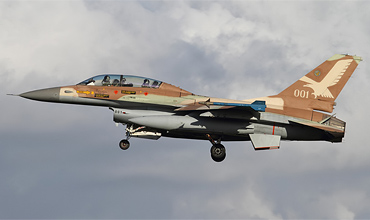 The ranges around Deci are also used by the Israeli Air and Space Force, hence the arrival of this F16B in october 2010, shot on spot 1. Photo by Claudio Tramontin. 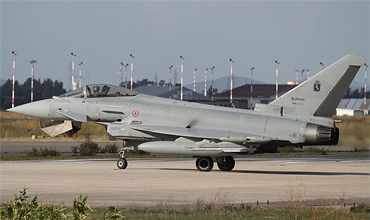 Moving around at spot 2, these kind of pictures are also possible. However do not stay at the fence for too long. Photo by Claudio Tramontin.
Frequencies
Based
Preserved
More Info
Links
Other Airfields
Send Updates!