Beauvechain (or Bevekom in Flemish) is home to the training fleet of the Belgian Forces. In June 2004, the Alpha Jet fleet of 11e Escadrille/11de Smaldeel was relocated to Cazaux air base, France, forming the French-Belgian Alpha Jet School (AJetS). After the withdrawal from service of the last Fouga CM170 Magisters, 5 and 9 Escadrilles/Smaldelen, both flying the SF260, were left as the only residents. They received new company however, when the Belgian Forces armed helicopter fleet relocated from Liège to Beauvechain: all of the A109 units, condensed in the 1 Wing Heli, now operate from this base.

The air base features parallel runways. There are small shelter areas on the southwest, southeast, and northwest side. Lastly, the northeast side holds the 1st Wing Historical Centre museum.

The closest motorway exit is exit 24 of the A3/E40 (Brussels-Liège). From here, follow the signs towards Beauvechain to arrive at the top of our map via the Rue de Wavre. A good alternative from the southwest is taking exit 8 of the A4/E411 (Brussels-Namur) and following the N25 to Grez-Doiceau. From there, pick up the N240 towards Jodoigne and you will enter the map in the lower left corner.

Around The Airport
1
Western approach

From the N91 you can read serials of landing aircraft. The aircraft are a bit high for photography though.

From the N240 (towards Jodoigne) you can see the southern shelter area where you might be able to read off some aircraft.

From spot 2, follow the Rue de la Grande Lecke to La Bruyère. In the village, turn left towards the field at Place de la Bruyère. From here you can photograph aircraft on the taxiway. This is, however, not appreciated by local authorities as there is a designated spotter's place (spot 4).

At the designated spotters' area near finals for both runways 22, landing aircraft can be photographed with 200-300 mm.

From spot 4, drive into Beauvechain and take the first road to the left. This leads to several dirt tracks from where you can view different ramps and read off some serials. 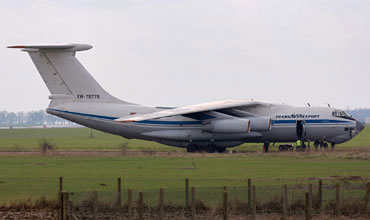