Deurne is the regional airport for the north of Belgium. While Flemish airline company VLM is now fully owned by Irish CityJet, its Fokker 50 fleet continues to link Anwerp to London City Airport. Quite a number of bizjets is based in Antwerp, next to several survey/photo aircraft. Finally, a bunch of light aircraft has its home here, including a few historic planes.

In the north, west and south the field is pretty much surrounded by urban buildings and sports fields. The east is quite open with a major road skimming the perimeter. Apart from some light aviation all handling takes place in the southwest corner.

By car, leave the Antwerp ring road at exit Borgerhout where the airport is mentioned too. Follow the signs, the terminal is just some 2km from here with free parking. When driving from the south (Brussels), following the signs from the E19 (A1) will make you arrive via the R11/Krijgsbaan and then anti-clockwise around the north side. Remember that in Belgium the absence of a road signs means 'carry on straight ahead'. Public transport offers several possibilities of which the least tiring is to take a train to either Antwerpen-Centraal or -Berchem station, and a bus from there. Bus line 14 of De Lijn to Mortsel and/or Vremde connects both stations to the airport. An alternative approach is via local train. Exit at either station Mortsel or Mortsel-Deurnesteenweg, both at less than 1km from the terminal.

The restaurant on the ground level of the modest terminal has a terrace with a superb overview of the aprons. The Aviation Society of Antwerp (ASA) has its own lounge that oversees the airport. This facility is on the right-hand side of the terminal entrance and is open on Saturdays from 14h till 18h. Visitors are welcomed but an entry in the guest book is mandatory.

Although behind the fence, from here one has a good view on the tarmac (as it is referred to in Belgium) to possibly read off missing numbers.

A mound inside the park-like area at this corner of the airfield is a fine observation and photo point for the movements on runway 11. The fence does not interfere with photos and 300mm effective will do fine for nearly everything. The construction behind the museum, "De paddestoel" (the mushroom) once was a prototype for the round hangars at Grimbergen.

The circular building just south of here is the Stampe & Vertongen Museum with several replicas of WW1 aircraft, a Spitfire and an SV-4. The museum is open during weekends from 14h until 17h. It also has a large window looking out over the apron and another one looking into one of the hangars that normally holds several SV-4s.

This spot can be used to get a few extra numbers. Through the mesh around the baseball field, one looks onto the apron at a different angle than at the previous spots, and even into hangars if they are open.

A spot very close to the holding and touch-down points of runway 29, but along a busy road so be careful. Parking is not possible here but can be done a bit further north or at the fortification (see next spots).

The fortification, built long ago and last used in WW2, provides several vantage points, especially after the recent cutting of a number of trees. Be advised though, there are drops as high as 8m in the fort where one could fall. Spot 5 can be reached by foot after parking at the entrance of the 'Binnenfort' and is so close to approaching aircraft that 50mm is enough on the average digital camera to shoot the action.

By car, enter the fort from the north and drive past the waste containers to a dog training area in the back. From here one can walk up to this spot to watch and photograph approaches on 29. Departures can be read off with suitable optics, the holding point is some 500m away from here. 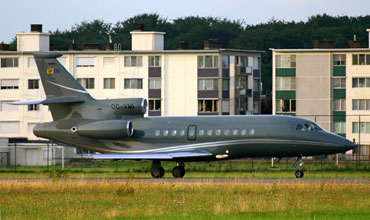 Resident Falcon 900 OO-VMI of the Flying Group was photographed by Walter van Brempt from the spottershill, location 3, with 200mm digital (about 300mm effective). 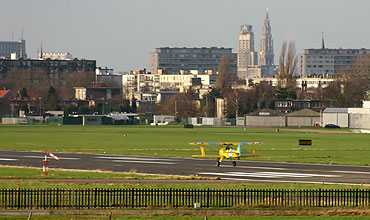 This is the view from spot 6 towards the runway. The Kaydet is too far here to be the subject but the situation is nicely illustrated. (Walter van Brempt)