Brief history
Uruguay is relatively small country by South American standards measuring only 176,215 square km and about 3.3 million inhabitants. Situated between Argentina and Brazil it has an Atlantic coastline as well.

Since gold was not to be found, European colonists paid little attention to Uruguay at first. The earliest colony was formed by Jesuits in 1624 and the years after that saw a diversity of colonization efforts by Portugal, Spain and Britain. Wild cattle herding was common practice, but organised farming instated by colonists took over. The Uruguayans endured this for nearly two centuries until the first revolutionary efforts were made by José Artigas. However, the struggle against Spain ended in Brazilian control. Eventually the uprising was successful, supported by Argentina and led by Juan Antonio Lavallejo the Brazilians were ousted in 1828. Uruguay as we now know it was born. Its position between Brazil and Argentina meant frequent intermingling from those countries and the country was plagued by civil wars and remained largely economically dependant on agriculture.

The first noteworthy step forward was the election of José Batlle y Ordóñez early in the 20th century who led an innovative administration that instituted various social security laws and made an effort of nationalising industries. Off course, these measures came at a price and the tax-payers, mostly landholders, resisted. Moreover, the taxes meant the weakening of the agricultural conglomerates. The equilibrium between re-distribution and keeping a prosperous agricultural sector to support this was never fully found, the economy faltered.

From the sixties onward the influence of the right-wing politicians and subsequently the military evolved into a series of dictatorships. It was not until the early eighties that a more democratic rule of law was introduced again. Against the backdrop of its recent history an understandable but controversial amnesty effort was made and many military leaders who were held responsible for human rights violations were not prosecuted. Uruguay slowly but steadily developed into a multi-party democracy with free elections. Today it retains its traditional economic basis in agriculture but also tourism (mainly from Argentina); its industry lacks modernizing effort a result of years of subsidizing. The Mercosur economic common market initially formed with Argentina, Brazil, and Paraguay offers some economic stability albeit without spectacular growth or prosperity. Defence expenditures will not allow large scale procurement programmes and Uruguay has frequently relied on its neighbours for second-hand hardware turning to Britain in recent years as well.

Brief history
The birth date of military aviation in Uruguay is 17 March 1913 when the Escuela de Aviación Militar was formed on a small airport 50 km from Montevideo. As with many other Latino countries the first instruction was performed by a European, a French instructor using Farman biplanes. Ten army officers formed the select group chosen to be the first Uruguayan military aviators. Among this first group were Juan Manuel Boiso Lanza (the first martyr of the FAU dying in a plane crash 10 August 1918) and Alférez Cesáreo L. Berisso (the future commander of the aviation school).

Along with two other young officers, Adhemar Saenz Lacueva and Esteban Cristi, they gained their military aviator status in Argentina and Chile and formed the Escuela Militar de Aviación (EMA) on 20 November 1916. This school exclusively performed military aviation in Uruguay until 1935. Several European aircraft types were used in fairly large numbers during the twenties, among which were about sixteen Avro 504K, up to thirteen Breguet XIV, at least five Castaibert 80, about 28 Nieuport 27, and various other aircraft in smaller quantities. These pioneering years saw many air routes opened and an overall increase in interest in flight and its military potential.

The EMA evolved into the air force as we now know it. In 1935 the school was transformed in the Aeronáutica Militar and five units were created as well as several airbases. Typical aircraft of the thirties and forties were European types like the Potez XXV A.2 TOE, Spad 13C.1 and 7, DH82A and IMAM Ro37 but this era saw the transition to aircraft of American pedigree. Beech AT-11 and C-47 transports, Waco JHD, SNC-1, AT-6D and T-6 trainers, and B-25J medium bombers were used in this period. The next decade started with the delivery of the F-51 Mustang notably enhancing the capabilities of the air force which now numbered nine Grupos de Aviación and was officially renamed from Aeronáutica Militar to Fuerza Aérea Militar on 4 December 1952. This was a memorable day because it meant independence from the army. The new force was reorganized into three commands (tactical command, training command and material command) and a brigade structure was implemented along with a fully staffed headquarters. 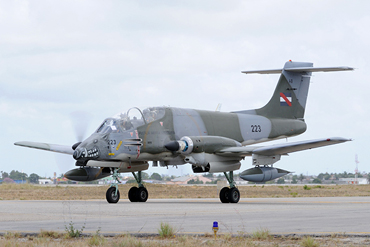 The FAU grew on this foundation. Later, some new units were created like the Comandos Aéreos, but no radical changes were made. New aircraft did arrive off course. FAU entered the jet age with factory fresh T-33s arriving in 1956 and F-80s in 1958. The Uruguayans were also one of the more exotic and lesser known Chipmunk users receiving 10 examples from late 1954 onward. They were withdrawn in May 1962. With regard to helicopters the first types used were the Bell 47 and Hiller H-23F followed by UH-12 and the venerable UH-1B Huey.

However, most of the types that are still used today arrived from the eighties onward. C212, EMB110, C-130B, Beech 65 and F-27/FH227 transports, T-34B and AT-92 (PC-7) trainers, Bell 212 and UH-1H helicopters, IA-58 Pucara and A-37B attack aircraft, and U-17 and T-41D utility aircraft. Latest acquisitions are the new T-260 (F260EU) trainer, the U-206 (Ce206) utility aircraft and second-hand Wessex HC2 helicopters from Great Britain dubbed HCMK2 in FAU service. However, the latter are being withdrawn already. More Hueys have arrived as well and two C212s also. Although the FAU has not voiced a need to replace aircraft nor freed budget to do so, but some of the types are obviously approaching the end of their effective use.

Brief history
The chronology of naval aviation in Uruguay starts with the inception of the Servició Aeronautico on 7 February 1925. The very first aircraft to be ordered in September 1930 for the aeronautical service were two CANT-18 and a single CANT-21 the first of which was eventually delivered in parts much later and the first flight was finally performed on 30 May 1932. A decision was reached that Isla Libertad was to become Base Aeronaval No.1 and the aircraft were based there, it was officially opened 12 June 1934. Activities were slow paced, especially after the crash of a CANT-18 in 1935 in which the first fatality of naval aviation occurred. During the Second World War six OS2U-3 Kingfishers were delivered prompting the withdrawal from use of the CANT-21, the sole surviving CANT-18 having been withdrawn early the same year. Lastly, a single Grumman J4F Widgeon was also delivered in 1942.

The next significant step was the creation of the Escuela de Aviación Naval on 15 August 1944. The small airport of Angel Adami was the location from which flight operations commenced. The Fairchild PT-23 was the first aircraft in use, three having been delivered in 1943. A couple of years later the current home base of naval aviation Laguna del Sauce was opened and the Escuela de Especialización was formed there. Laguna del Sauce was allocated the status of airport in 1946 and the navy took up residence on 10 September 1947. It was officially inaugurated 12 August 1949 and named Base Aeronaval No.2 Capitan Carlos Curbelo in the process.

The first significant boost in capability occurred 21 December 1949 with the arrival of ten TBM-1C Avengers that were flown from Fort Worth to Laguna del Sauce by Aviación Naval personnel. Three SNJ-4 Texans and six more Avengers followed in April and May 1950. All aircraft were delivered through air, no mean feat for this fledgling air arm. This year also saw the first naval aviators trained in Uruguay graduate from the Escuela de Aviación Naval. Further aircraft that were taken on charge during the fifties include the PT-26, ten F6F Hellcats, two PA-18 and three Martin PBM Mariners. The first helicopter also arrived in this decade in the shape of two Bell 47G. This exciting period also had its bleak moments, for example on 20 June 1957 when a SNJ went missing during a search mission for an Argentinean ship and the PT-26 sent out to find it crashed also. 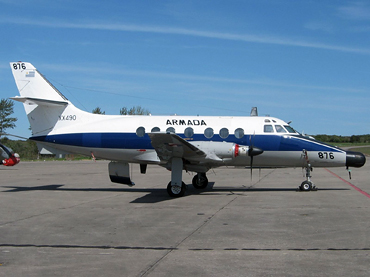 The sixties saw further development and the first of a long lasting string of international exercises called UNITAS was held in 1960 with participation of the Uruguayan Navy, the naval air arm participated with two Mariners. More aircraft arrived with three TC-45J, the first three S-2A Trackers, a single T-34B Mentor and two SH-34J (followed by two CH-34J later), and two TH-13T helicopters continuing the bonds with the United States. In 1971 the Uruguayan navy performed their first operation from an aircraft carrier when S-2A 851 flew from the Argentinean carrier 25 de Mayo. Neighboring Argentina also provided aircraft, for example some SNJ-4 Texans in the sixties and three TC-45H along with nine T-28S Fennec in 1979 were obtained from that source.

From the eighties onward the current inventory of the Aviación Naval was incorporated. With the Beech 200T arriving in 1980, the three T-34C followed in 1981, and three S-2G in 1982 and 1983. Also a Bell 222 was used temporarily in the early eighties. They traded their two remaining Texans for a single air force T-34B (originally from Chile) in 1985, a single Bell 47G-5 arrived in 1988. Three Ce182 joined the force in 1990, a single PA-34-200T and two Wessex were taken on charge in 1992, followed by a single Bell 47G in the same year. Two more T-34A were obtained, again from the Air Force (this time former Spanish aircraft). More Wessex were to be incorporated, a series 60 example arrived in 1994 followed by five Wessex HC2 in 1998 that were included in a comprehensive deal with Great Britain. Under this deal the Uruguayan navy was also provided with two Jetstream aircraft in 1999. The nineties also saw the delivery of the second PA-34 in 1995 and another lone Bell 47G arrived in the same year. Most recent addition to the force are six former German Army Bo105s.

Laguna del Sauce remained the main operating base throughout this period and is still very much the focal point of Naval Aviation today. The wish list of the Aviation Naval includes a new patrol aircraft, Orions have been offered but proved to costly to operate, so no new aircraft are imminent.