Lelystad Airport is the busiest general aviation airfield in The Netherlands and together with Rotterdam, Eindhoven and Schiphol is a member of the Schiphol Group. That fact is becoming quite evident as construction works to make this a relief airport for Schiphol are nearing completion. The runway has been extended from 1250 meters to 2700 meters and a new terminal is being built, capable of handling four A320-sized aircraft simulteanously. The new operating mode is now set to begin in November 2019. For the time being, the field offers daytime visual operations and limited night time instrument arrivals/departures. On an average day, you will see many light singles ranging from ultralights to turboprops like the Ce208, quite a few twin props, light helicopters and a bizjet or two.

A handful of flight training schools for single- and twin engine aircraft as well as helicopters are situated on the airfield, and also several aircraft dealers and maintenance companies. AIS Airlines has no scheduled flights here, but a maintenance facility. Certainly an attraction is the aircraft painting hangar, which moved here from Schiphol years ago. Aircraft up to the largest bizjets are handled here.
Additionally, two aircraft museums keep their collection here. The Aviodrome museum has settled on this airport after its move from Schiphol last century. Its inventory includes aircraft varying from light single props to jet fighters and from majestic propliners to a B747. The former Dutch Dakota Assocation, now DDA Classic Airlines, has even been moving back and forth between Schiphol and Lelystad several times and is currently based here again, although much of its flying still takes place from Schiphol. Less conspicuous but just as unique is the Early Birds Foundation (Stichting Vroege Vogels) with its collection of vintage aeroplanes, mostly light ones with wooden constructions. Both museums organise fly-ins now and then.

The airfield used to have a straight-forward design with taxiway parallel on the south-east side of the runway and virtually all the buildings along that, with a central terminal building. Nowadays, there is a second and much wider parallel taxiway on the north-west side of the lengthened runway, connecting it to the newly built terminal area for jetliners. The latter lies at the northern corner, where a microlight strip used to be (closed September 2016). The new terminal and parking lots cannot be missed.

The airfield is accessible by public transport, bicycle, car, private aircraft and even by boat (as described on the Aviodrome website). Buses run from Lelystad and Harderwijk train stations, usually at half-hour intervals. Motorists can use motorway A6 for fast access or approach from the south side via major roads. The A6 lies north of the airport, parallel to the runway. In either case, the airport is sign-posted and the N302 crosses right underneath final 23.

As mentioned, the biggest civil aviation museum in the country has an interesting collection. Worth mentioning too is the replica of a part of the original Schiphol airport with platform housing historic aircraft. The Aviodrome is open daily except Mondays and official holidays, 10:00-17:00 and admission for adults is 17 euros.

The main apron and terminal for general aviation with the now hightened control tower form the centre of the 'old' part of the airport. Photos can be taken over the fence by use of small steps and a bit of walking around reveals several angles to take a peek and a shot.

The Flantuas restaurant features a terrace on the first floor, overlooking the runway and nearby aprons, making it an excellent viewing and photography point. If visiting here, please be a customer and behave like one. Additionally, driving, riding or walking along the airport roads will bring you to nearly every apron here to view the airplanes and take photos. As would be expected the atmosphere is relaxed and asking politely will usually provide access for an unobstructed view.

The aircraft painting and sealing facility, once operating as QAPS and nowadays using its parent company's name Satys, attracts interesting visitors. When these aircraft are out in front of the hangars spot 4 offers a nearby view at them. Good for photos too.

The second area to explore for smaller airplanes lies at the Flamingoweg, reached via the Maraboeweg or directly from the Eendenweg.

The lengthening of the runway took out the part of the Talingweg that used to cross the centreline; the nearest alternative on the 05-side is now 2,6km away. Some nearby views of this end of the runway and the new taxiway can still be had though, by approaching via the Anthony Fokkerweg towards the RDW (road authority) Testcentrum. Be sure not to block this access road and be aware of backlight most of the day.

Choose a spot along the byway of the N302 called Larserpad for good views on landing traffic. Additionally, a lot of planes on the field can be seen and read off, including part of the Aviodrome inventory. 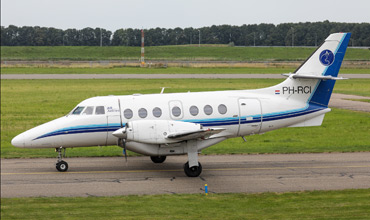 Seen from spot 3 was this Jetstream, visiting for maintenance. (Berend Jan Floor) 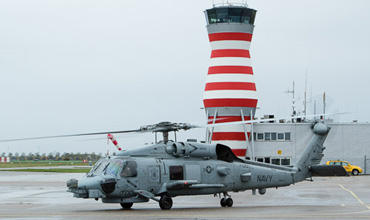 Manolito Jaarsma was along many photographers framing this surprise hit visitor in front of the rebuilt tower from spot 3.