Copenhagen is the biggest airport in Scandinavia and the main hub for Scandinavian Airlines System. It is quite a busy airport with more than 21 million passengers a year and 260.000 take-offs and landings. Airlines from all over the world use the airport, including cargo flights. The number of bizjets at Copenhagen is low because nearby Roskilde, far less expensive, is made more attractive to them. Just one bizzer is based here, being Maersk's OY-MMM. Recent changes are the closure of TEC AViation and the bankruptcy of Sterling. Police patrol the roads continuously, but airport security and police are usually very friendly.

As the map shows, the airport has very little room left on most sides, but just enough to provide for some spotting points. The east side is quite open, the southern half is mainly surrounded by farmland with some options for our hobby, and the northwest is mostly shielded by walls and mounds. Of the three runways, the parallel pair is favourite with the most frequent use being landings on 22L, and departures from 22R. Runway 12/30 is mainly in action with bad weather.

Driving to the airport is very easy, with ample signs as soon as you approach Copenhagen. Exit 16 of the E20 is the one near the terminals and SAS hangars, close to the tunnel to Malmö. Public transportation to the airport is very good with trains, busses and the metro leaving from the center of Copenhagen. See panel on the right for more info. Free shuttle buses are provided to P15 and P17, close to spots 1 and 2. Parking is not allowed on many roads around the airport, so use the alternatives please.

The maintenance hangars have several aprons in front of them, with usually a number of aircraft parked outside. This is the spot to see those. Photography is difficult, but sometimes possible through the fence.

With landings mostly on 22L, this is usually a good photo spot all day. Some other traffic can be seen as well, but 22R is too far away to see much there. No parking on the spot but at either of the nearby large car parks.

Alternatively, the northernmost building near the cargo terminal (between spot 2 and 3) has a small lot that can be used. When doing so, be aware of a few things. Firstly, this is a private lot, but parking by others is often allowed, based on proper conduct. Secondly, the stairway next to this spot is off-limits! Do respect this, to avoid loosing a valuable option here.

Further down the Kystvejen, this spot offers a view on the cargo apron (Apron East). Depending on their exact position, not all aircraft there may be visible due to the buildings. In some cases, taking photos through the fence is possible.

Continuing along the coast, one crosses the centreline of 30. Obviously, traffic on this runway can be watched from here, albeit usually in bad weather when this runway is used mostly. Once more, no parking on the spot.

A crash gate abeam the threshold of 04R connects to the road on the northern edge of Store Magleby. From here, many movements on the field can be watched. A double fence will prevent photography of aircraft on the ground, even with steps, but airborne planes should work.

A small farm road runs along the fence here, and gives intermittent views on the field. To get a clear line of sight on 04L traffic, steps are required. Mostly, 22R will be departure runway in which case the climbing aircraft should be OK for photos, though sometimes already quite high. Parking could be a problem. A similar option exists a bit to the northeast, near the next corner of the road at the perimeter.

The most popular spot along the perimeter is this one, with a fast food restaurant featuring a kind of garden. This area, close to the landing threshold of 22R, opens at 10:30 am and is freely accessible then. The advantage over the street is that from the latter, photos have to be taken through the fence while that is no factor here. Aircraft on 22L/04R can be photographed too, but at least 400 mm are required to do so. The light gets good sometime in the afternoon. Many of the stored Sterling 737s can be seen from here.

South of the first roundabout on this side of the field, next to a large noise abatement wall, a few aircraft may be visible at Terminal 1 or on Apron West. This is not a photo spot.

The terminals offer no possibilities before customs and security. And even when behind those, as a passenger, the options are limited as photography is not allowed airside. 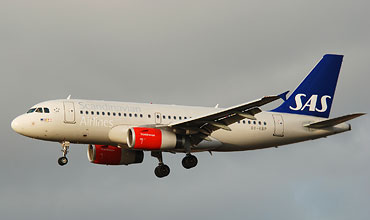 An A319 of home carrier SAS landing on 22L. Photo taken at spot 2 by Jonas Aagaard Hansen. 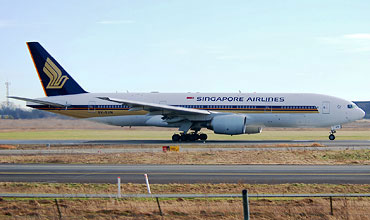