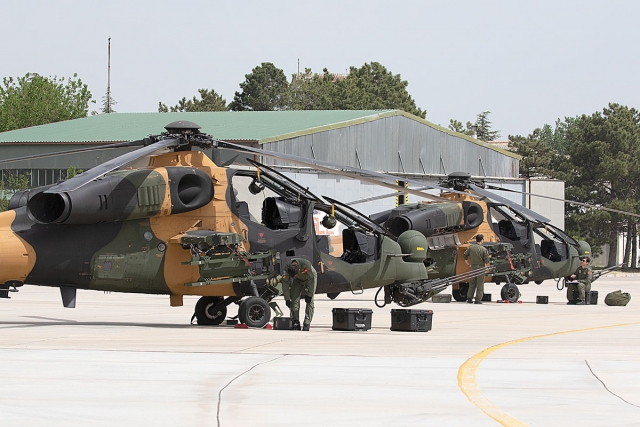 During the recent Farnborough Air Show the CEO of Turkish Aerospace Industries (TUSAS) confirmed to CNN Turk the sale of six T129 ATAK attack helicopters to the Nigerian Army.

The T129 ATAK is based on the A129 Helicopter, produced in cooperation with AgustaWestland, and is equipped with a redesigned airframe and indigenous weapon systems. Just recently (2021/22), the Philippine Air Force received six T129s from Turkey.

The deal with Turkey may seem to be unnecessarily complicating logistics and maintenance of a fleet, especially as the Nigerian Air Force (NAF) flies Mi-35s as well. If the NAF has lost confidence in being able to get the Mi-35s repaired and overhauled abroad in future, even though the NAF has gradually been taking on more maintenance themselves the procurement of T129s makes a lot more sense.

With regards to the AH-1Z Vipers mooted for future procurement the process of US Foreign Military Sales (FMS) can be lengthy tortuous and is in no way guaranteed as it is subject to detailed congressional review and approval, a process that has thwarted Pakistan's plans to acquire T129s. On 29 July 2022, Scramble Magazine reported that the US Congress has paused arm sales to Nigeria.

It is worth noting that Turkey targets Africa in particular for armaments sales, and that Turkey is already training Nigerian military personnel on the operation of its advanced Unmanned Aerial Systems (UAS). Nigeria is reported to have ordered Turkish UASs, although the exact type is still uncertain. However, unofficial sources indicate that the Nigerian military opted for either the Bayraktar TB2 or Akinci UCAS, or even both. In addition the Nigerian Navy has two 76 metre Offshore Patrol Vessels on order from Turkey's Dearsan shipyard.