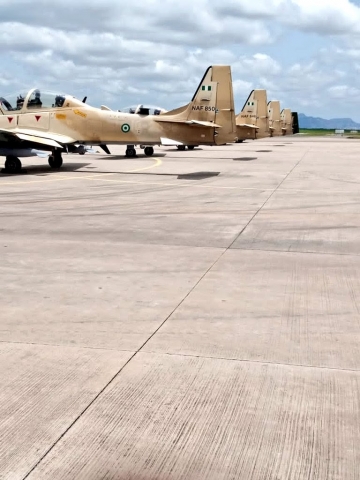 The six aircraft, delivered to Nigeria via Prestwick (UK) and Zaragoza (Spain on 19 and 20 July 2021, are part of a dozen sold to Nigeria by the US, to aid combat actions and air assaults to fight the insurgency. The Super Tucanos have received the following serials: NAF845, NAF846, NAF848, NAF850, NAF851 and NAF852.

US Department of Defence leaders attended the induction ceremony, hosted by the Nigerian Minister of Defence Bashir Salihi Magashi and the NAF. "The Nigerian Air Force is one of our key partners that plays a critical role in furthering regional security and stability," said Gen. Jeff Harrigian, US Air Forces in Europe-Air Forces Africa commander. "This ceremony symbolizes the strength of our unique partnership and underscores the value of training and working together."

The aircraft were purchased through the Foreign Military Sales (FMS) programme and includes spare parts for several years of operation, contract logistics support, munitions, and a multi-year construction project to improve Kainji Air Base infrastructure. The total sale is valued at almost USD 500 million, making it the largest FMS programme in sub-Saharan Africa. In total 64 NAF pilots and maintainers are trained to US standards with the 81st Fighter Squadron Panthers at Moody Air Force Base (GA).

The induction ceremony was held at Kano/Mallam Aminu air base, but the Super Tucanos, operated by the 407th Air Combat Training Group (407 ACTG), will officially be based at Kainji Air Base with Forward Operating Locations (FOLs) at Maiduguri and Yola. Deployment to the FOLs will be for very short periods due to security concerns at those locations.