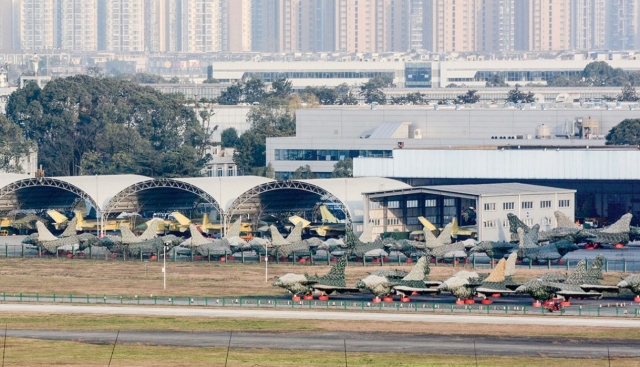 Recently we revealed that deliveries of the Chengdu J-10C single engine fighter to the People's Liberation Army - Air Force (PLAAF, Chinese Air Force) seem to have been stopped. See the Scramble Magazine news item of 23 January 2021.

With the picture shown today multiple rows of fighters can be seen standing idle at Chengdu/Huangtianba, with all the flight sheds behind stuffed with J-20 fighters preparing for there test flights.

Although some believe that the J-10s are stored whilst waiting until an order for the J-10CEs with Pakistan is signed, a more probable reason could be that the locally developed Shenyang WS-10B engine has not yet been qualified for operational use. In November 2019 the first aircraft of production batch 05 was noted with this engine, but no WS-10B powered aircraft have been seen operational yet.

All operational aircraft noted are still powered by the Russian Saturn AL-31FN engine.