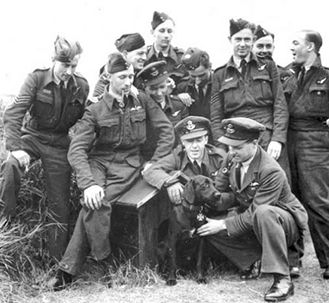 
Nigger was a male black labrador retriever belonging to Wing Commander Guy Gibson of the Royal Air Force,
and the mascot of No. 617 Squadron.

Gibson owned the dog when he was previously a member of 106 Squadron.

Nigger often accompanied Gibson on training flights[1]
and was a great favourite of the members of both 106 and 617 Squadrons.

He was noted for his liking of beer,
which he drank from his own bowl in the Officers' Mess.[2]

He was buried at midnight as Gibson was leading the raid.

Replacement of headstone for Dambusters hero Guy Gibson's dog sparks petition to change it back
https://www.change.org/p/r-a-f-scampton ... s-memorial
It calls for the name of the dog,
which is now used as a racial slur, to be reinstated

The much-loved squadron dog died on the same night
that his owner breached the famous German dams
during the Second World War.

A gravestone honouring the Dambusters' dog - whose name is a racial slur - has been replaced.

The 617 Squadron's mascot, a black Labrador,
died on the day of its famous "bouncing bomb" raid on German dams in 1943.

A memorial at the Dambusters' World War Two base, RAF Scampton, bearing the dog's name was removed.

The RAF said it did not want to give prominence to an offensive term that went against its ethos.

Sir Edward Leigh, Conservative MP for Gainsborough,
said he was "very fearful of our ability today to erase or re-write history".

Kris Hendrix, campaigns manager at the RAF Museum, said the dog - which the BBC is not naming

- was a "drinking buddy" for squadron members
and would consume litres of beer before passing out.

He was hit by a car and killed on 16 May 1943,
but his death was kept from the airmen as it was feared they might see it as a bad omen.

"The standards have changed throughout the years,
while it may not have been a controversial name during the Second World War,
things are very different now."

Sir Edward said he had written to the station commander of RAF Scampton about the change.

In his letter, shared with the BBC, he said:
"Undoubtedly we are both more sensitive and more sensible today
when it comes to the delicateness of racialist and derogatory terminology
which had been used with unfortunate informality in the past.

"I am, however, very fearful of our ability today to erase or re-write history.
The past needs to be explained, taught about, and learned from - not re-written."

We are relly going way too far with this. Like the comment, we are rewriting history instead of explaining it (and learning from it)!!

Millennial snowflakes gonna snowflake. Those ‘activists’ and their helpers and/or sympathizers are on the wrong side of history.
Cheers,

The word that is Gibson's dog name is 'uber streng verboten' in here in Britain, and it's use here will land one in court, and upon conviction, a criminal record.

However cultural vandalism and associated criminal activity during a so-called lockdown is not only tolerated, but even encouraged from sections of our common purpose snowflake Guardianista establishment.

Crazy times.... to stay out of trouble maybe you should change your name in ”Le Addeur blanc“

Gerard wrote:Crazy times.... to stay out of trouble maybe you should change your name in ”Le Addeur blanc“