While Le Bourget is of course the main business airport of Paris, there are several other airports around the French capital to see bizjets. One of them is Pontoise, which is about 30-40 km northwest of the centre of Paris. Especially during the Paris Air Show it is worth a visit when restrictions at Le Bourget make Pontoise a nice alternative. Usually about five to ten bizzers can be seen here, often including some exotic ones. Furthermore several aeroclubs are active here.

The airport has two perpendicular, crossing runways. It is situated in a shallow valley, just of road D915.

Travelling by car from Paris take motorway A15 to Cergy-Pontoise and then take exit 10 for road D915. This road passes the airport to the east. STIVO operates bus services from RER-train stations in Cergy and Pontoise. Please consult the STIVO website for more details (see right column).

Around The Airport
1
Hangar Area

The larger hangars can be found in the north western corner of the 'cross' formed by the runways, turning right on the roundabout off road D915. Most aircraft on the ramps can easily be seen and photographed, in particular to the left and right of the hangar in the southeast corner of the area.

Turning left at the roundabout off road D915 leads you past the threshold of runway 30 to restaurant Le Concorde and several aeroclubs. Next to the restaurant is the visitors' parking area for small aircraft. Moreover this point allows a view in the hangars on the other side (if they are open). Finally you are very close to runway 30, so nice shots of aircraft landing and taking off can be taken in the afternoon. 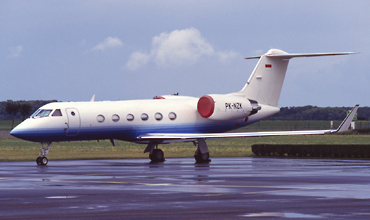 Walk past the main hangar and from the edge of the apron you can make this sort of photos (spot 1, Leo Hoogerbrugge). 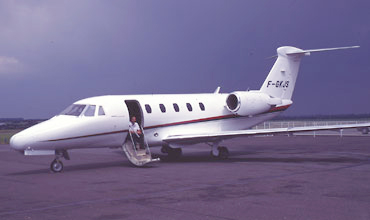 At spot 2 aircraft can be parked very close, as this Citation III demonstrates. Just about 50-70 mm was required (Leo Hoogerbrugge).
Frequencies
Based
More Info
Links
Other Airfields
Send Updates!