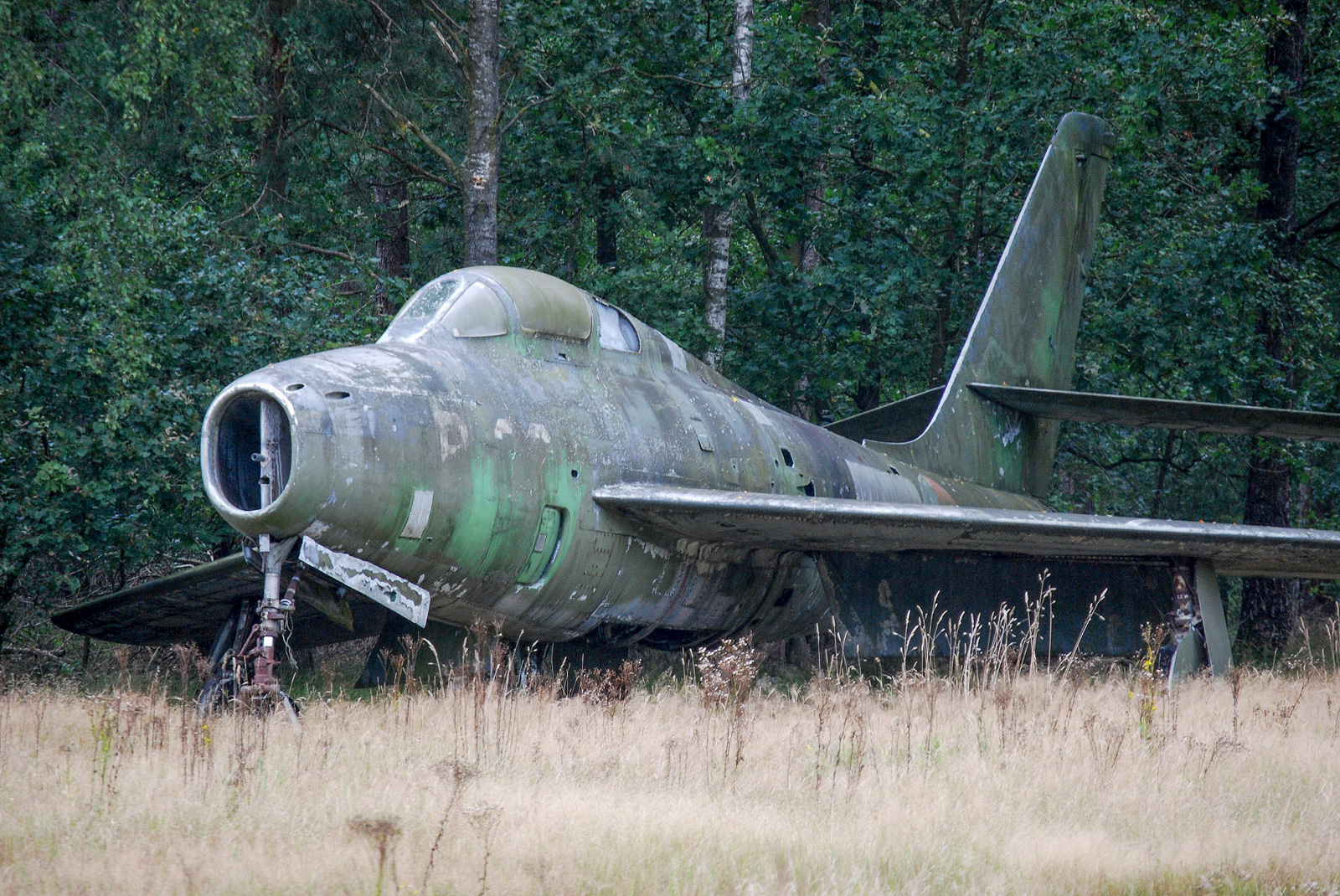 PS Aero has moved their Lynx AH7 ZD282 to someone in Germany by late October. The Soviet star and serial 2506 have been removed. 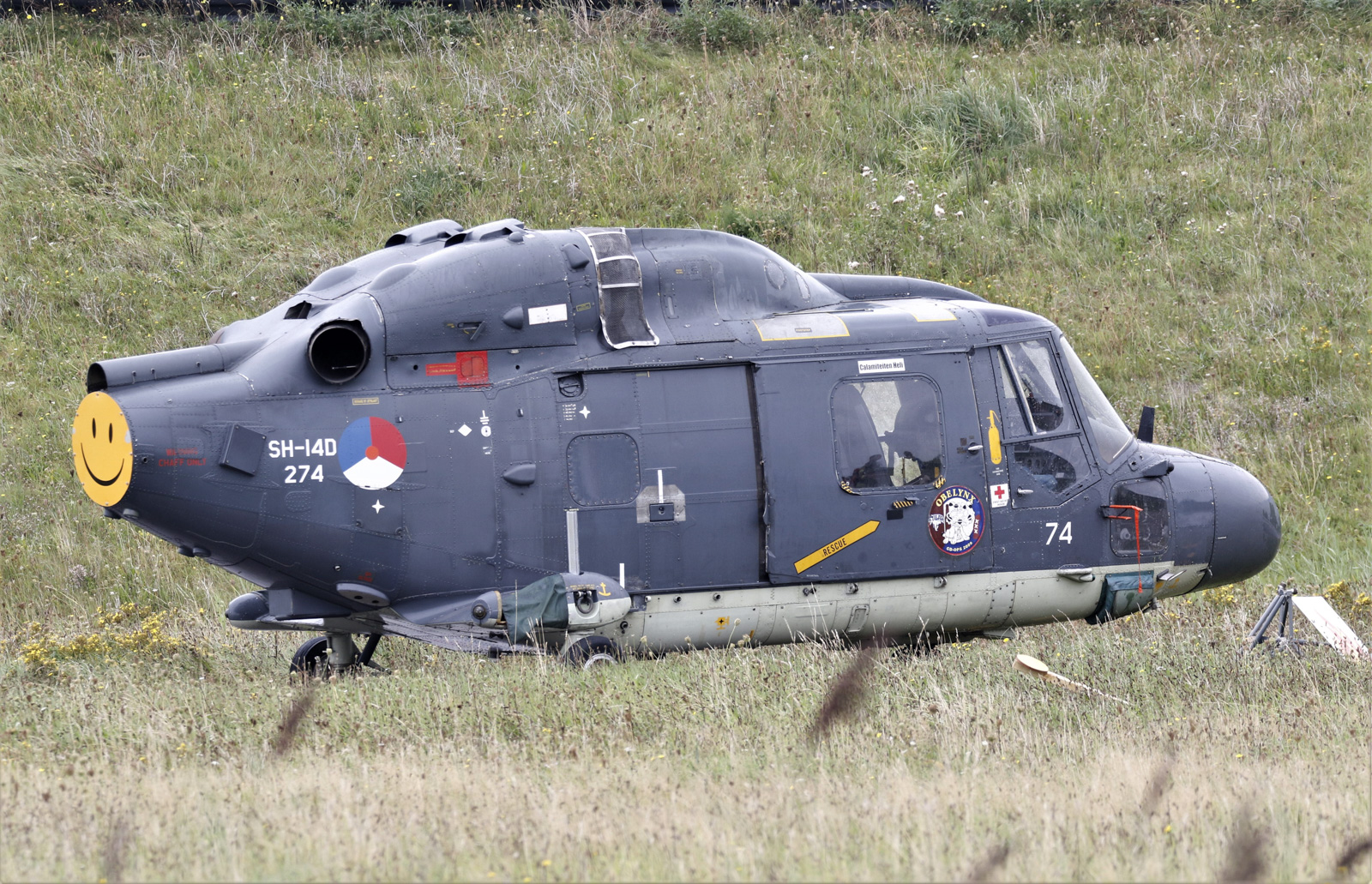 Dutch navy SH-14D 274 is used by the fire fighting department at De Kooij. It is not often that this aircraft can be seen outside, it is normally locked away in a shed. (2 September 2021, Martin Uleman)

On 22 October the Starfighter fuselage arrived at the private collection. It came all the way from Markham, Canada. The tail and other bits still have to come.

ST21 was used for a new IFR modification program. Due to poor results the project was stopped. The aircraft was not demodified and is no longer used. During heavy maintenance in 2017 serious corrosion was found on the ST27 which resulted in the grounding of the aircraft. Currently also stored are ST19, ST20 and ST25, of which ST20 is planned to fly again in 2022.

This Aviacar was destined to become YA-EHA01, but never made it further the Malta. It was stored there since April 2011. It is scrapped by Fenix Recycling and the cockpit was preserved at Finex owners house in Langdorp for some time. It has now been sold and turned into a food truck and seen at Brustem. This is however not its home base.

Former Dutch F-16 J-624 is now in use Kleine Brogel as instructional airframe. 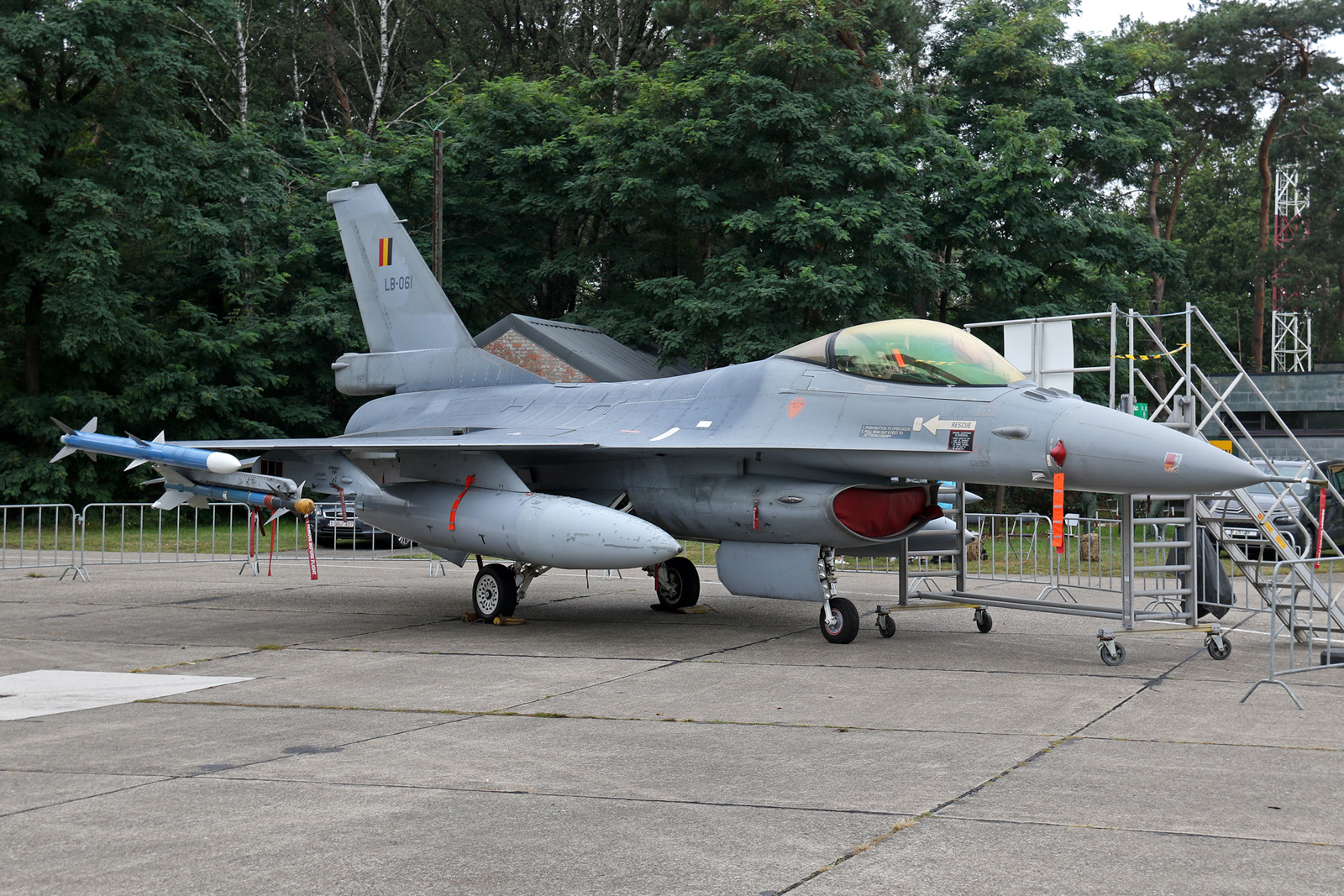 The Belgian Air Force uses F-16AM LB-061 as an instructional airframe. The meaning of the serial of this former Dutch J-624 is not clear. It is most likely a reference to the Lijn & Bewapening (line maintenance and armament) unit which uses hangar 61, although some say it might be a link to the Mark 61 bomb. (Kleine Brogel, 11 September 2021, Laurent Heyligen)

Both civil registrations are for test- and ferry flight only. OO-SEE was allocated on 12 July and OO-KNG on 13 July. They left for the Historic Helicopters at Chard - Crewkerne, UK, on 20 October.

The Mi-4 is used as a training aid at the barracks of the army’s 61st Mechanical Brigade and is visible over the fence (N42.64211, E24.78971). The aircraft came from Anevo where it was incorrectly reported as having serial 37. 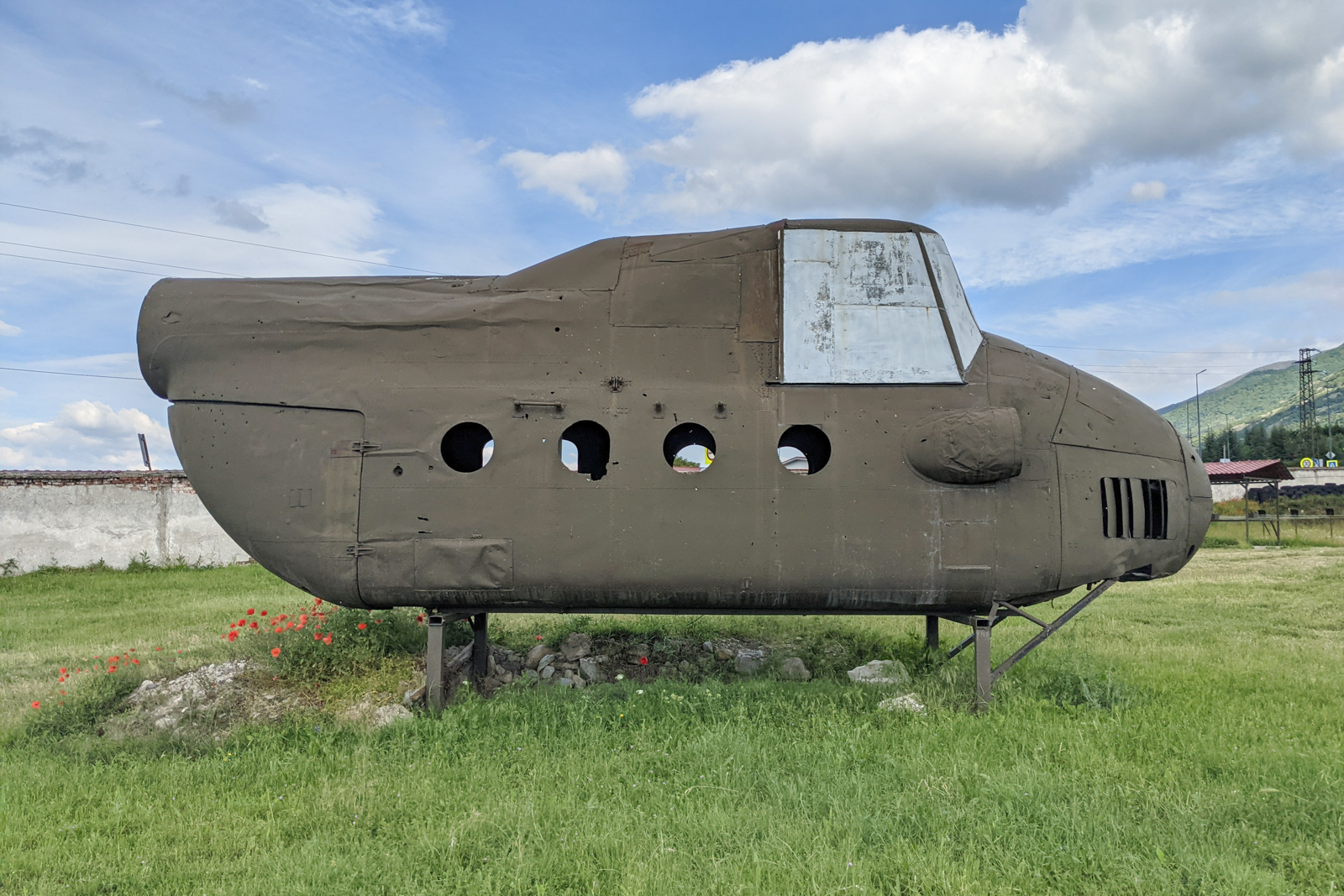 Not looking very spectacular, but this Bulgarian Mi-4 18 is still an interesting aircraft. It is used as instructional airframe at the barracks at Karlove and came from the nearby range at Anevo. (3 June 2021, Ivan Voukadinov)

The Centre de Perfectionnement et de Voltige Aérienne, a flying school which uses only Stampes, has added one to their collection. The other ex military Stampes they use are 19/F-BUAZ, 153/F-BMMG and 1090/F-BNXD.

The Piaggio is stored outside at the private airfield of Bantheville, near the Belgian border (N49.35965, E5.09686). Broussard 108/F-BNEX is still preserved at the entrance.

The Conservatoire de l’Air et de l’Espace d’Aquitaine handed the Mirage over to Dassault on 4 June 2021. It is now in white colours and visible from outside at the north side of the Dassault facility. 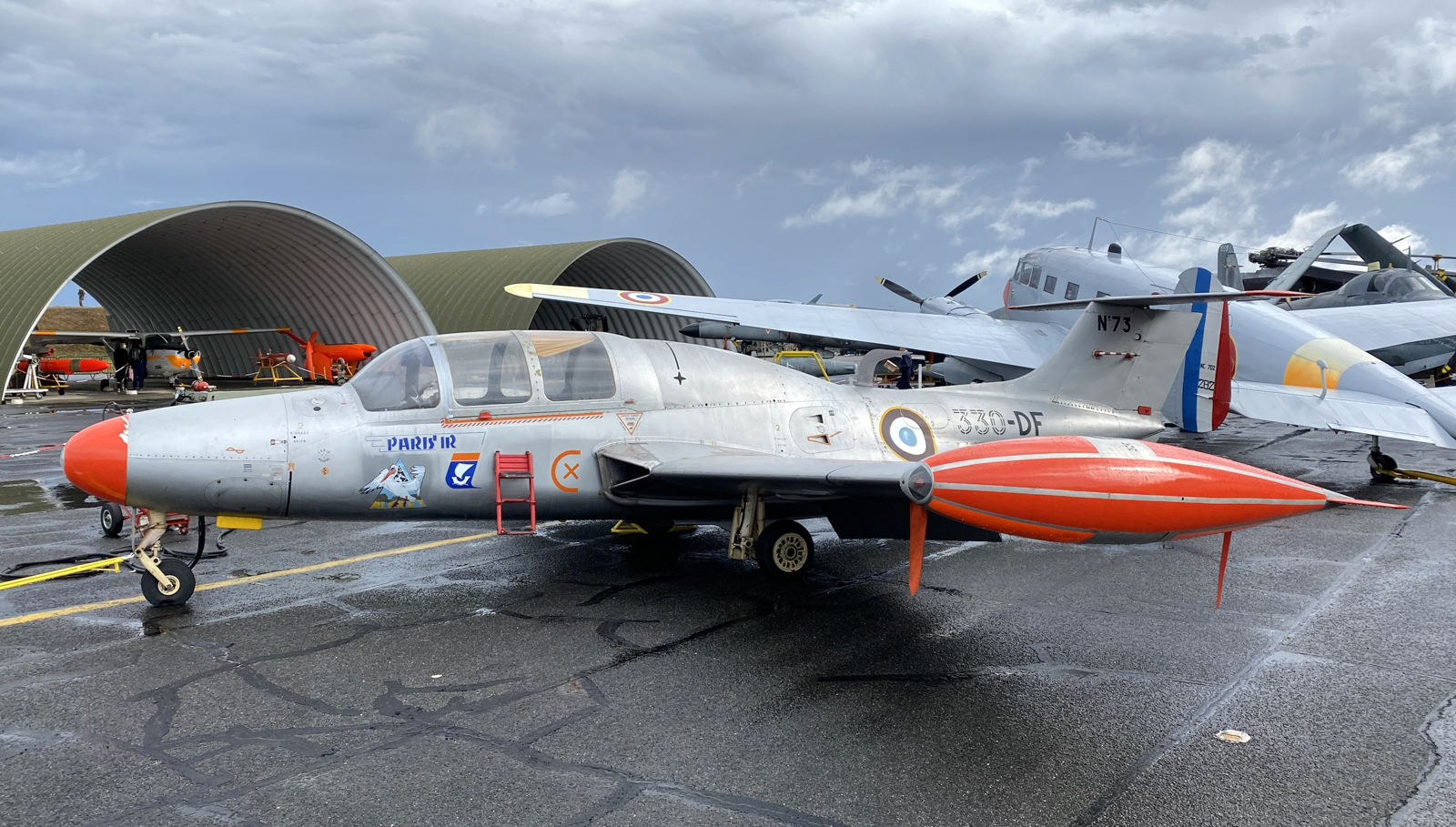 During one weekend a year in September nearly all French museums open their gates for free for the general public. This is a good opportunity to check the Conservatoire de l’Air et de l’Espace d’Aquitaine (CAEA) collection at Bordeaux- Mérignac. MS760 Paris 73/330-DF was one of the many aircraft parked outside. (18 September 2021, Chris Horts)

The Sécurité Civile training area received a second Puma. They already had 1263/CPN. 1056 used to be at Camp de Satory (Versailles).

The Wassmer left Saint André de l’Eure on 8 June 2019. It now seems to be based at Cannes.

Phyt Helicopters has been renamed Heli Light ULM and uses, besides ULM helicopters, still three Bell 47s of which only one has a military history. SV-4C 71/F-BFZN is still here at the other end of the hangars.

Both Alouette 2s were in the ABC Helicopters hangar. In due time one will be restored using parts from the other.

Spanish CASA 1131E F-AYKG (ex N8TE) is a new arrival at La Ferté-Alais. The aircraft , carrying fake Swiss markings, was rebuilt in the 1990s in the USA as a Bu131 BUCKR JNGM ENS. It is the restored N433WN, which is former Spanish E.3B-433. Its identity is confirmed by its construction number 2034 on the construction plate. (28 August 2021, Otger van der Kooij)

Both aircraft are at the Les Ailes Limousines workshop in town. MS733 149/F-AZSA has been fully restored and should be flying from Cognac. The society’s Broussard, 86/F-GFMN, is flying from the airfield of Limoges – Bellegarde.

Both are former Brazilian Mirage 2000s bought by the French company Procor and are based here.

In Scramble 508 there was some text was missing with the Spitfire. This is marked as ML407/NL-D and is a full scale replica.

The Bell is dumped in dismantled state between some containers next to a hangar at the north eastern end. The helicopter overhaul company was closed some three years ago and the Alouette 2s and Bell 47s listed in EMOOS have gone.

This Patrouile de France Alpha Jet which ran off the runway at Perpignan in 2019 and is now stored in a hangar here.

The first three are in the large hangar on the east side, across the public road. The Chipmunk is next door and used to be OY-ATF (based at Ringsted). MS733 61/F-BKOG is no longer here. Also the stored MS733s at the garage in the nearby village have gone. 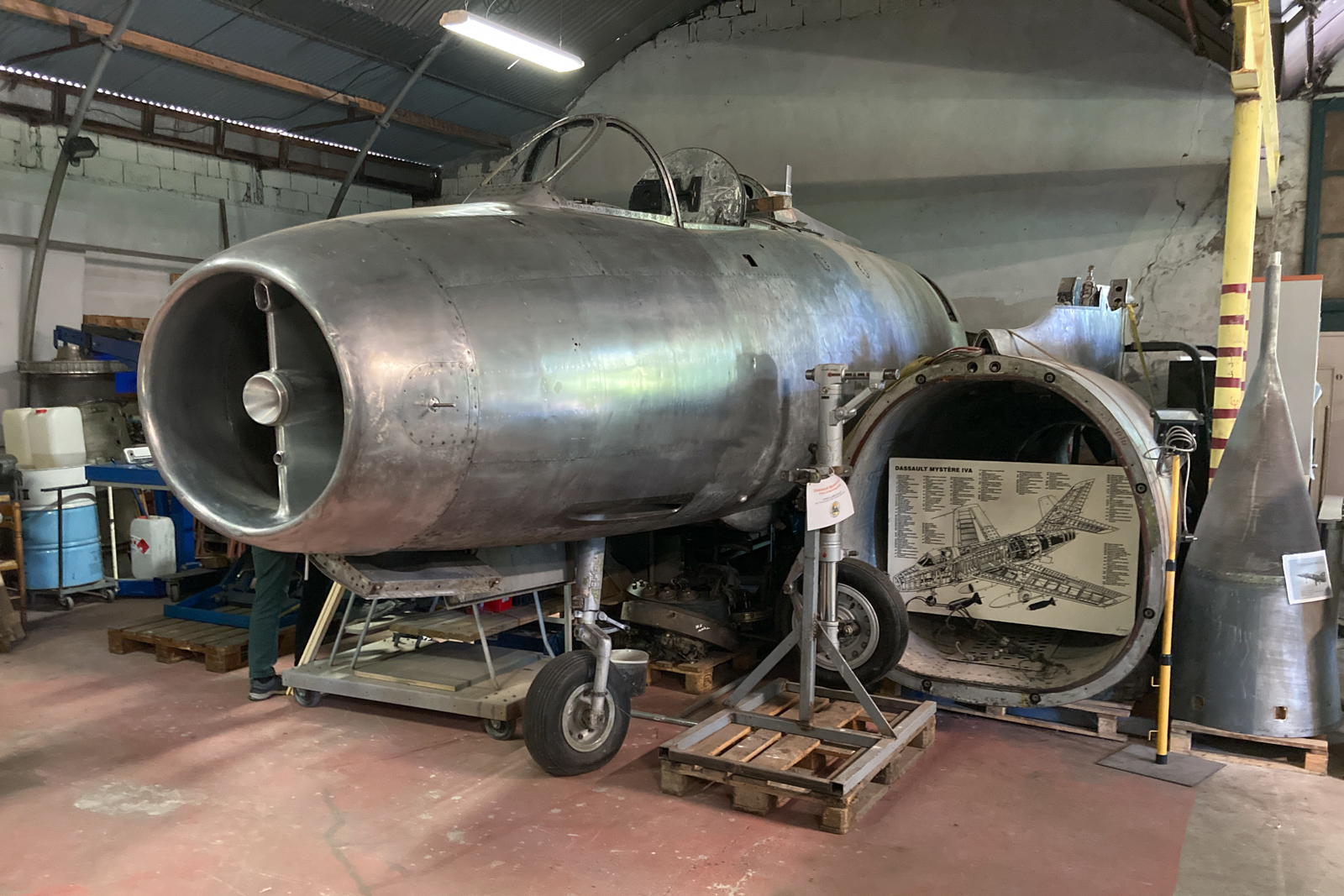 The Ailes Anciennes de Haute Savoie from Excenevex, France, is in the process of restoring Mystère 4A 33. (2 October 2021, Leonard van Teeffelen)

This is a former Bentlage instructional aircraft.

Sk15A 5052/D-EBUX had some engine problems shortly after is post restoration flight in 2019. It is currently stored at nearby Gaufelden waiting for a restored engine.

On 3 September the Airbus arrived on it last flight at Hannover. Somewhere in the next few months it will be transported to the Serengeti Park at Hodenhagen where it will be transformed in a restaurant which will be opened in the summer of 2022.

Not reported before but the aircraft moved from the nearby airfield to the museum.

Both are reported as instructional with the Ausbildungswerkstatt. 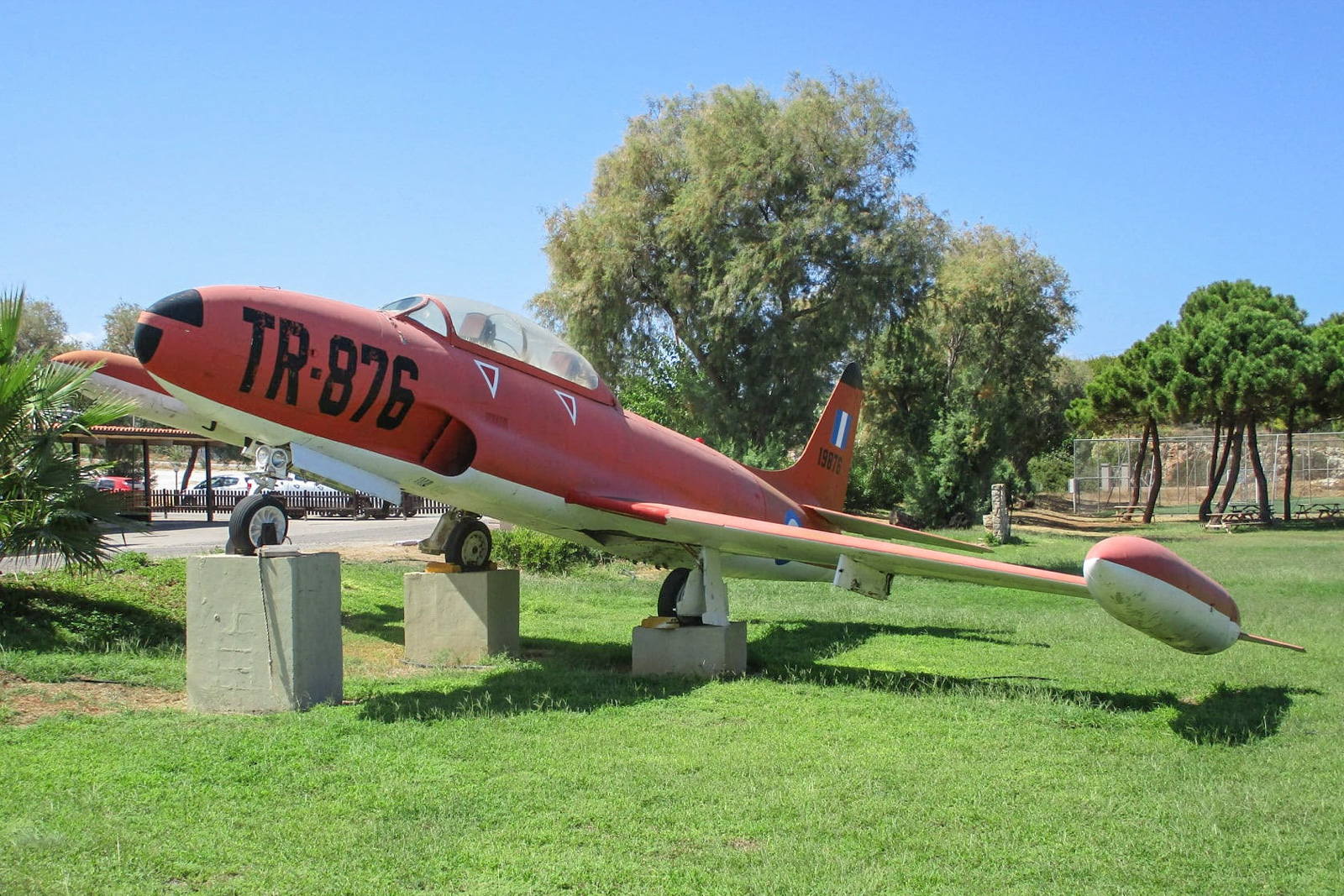 T-33A 35155 (marked as 19876/TR-876) at the Officers Club of a military beach resort at Kounoupidiana, Crete, Greece. The aircraft has been painted to commemorate the loss of the aircraft and her crew while flying for 367SEE from Souda on 29 May 1979. Killing Pilot Lt. Colonel Athanasios Bourolias and Warrant Officer Antonios Sifakis. (September 2021, Andre Wilderdijk)

Both are near the control tower. 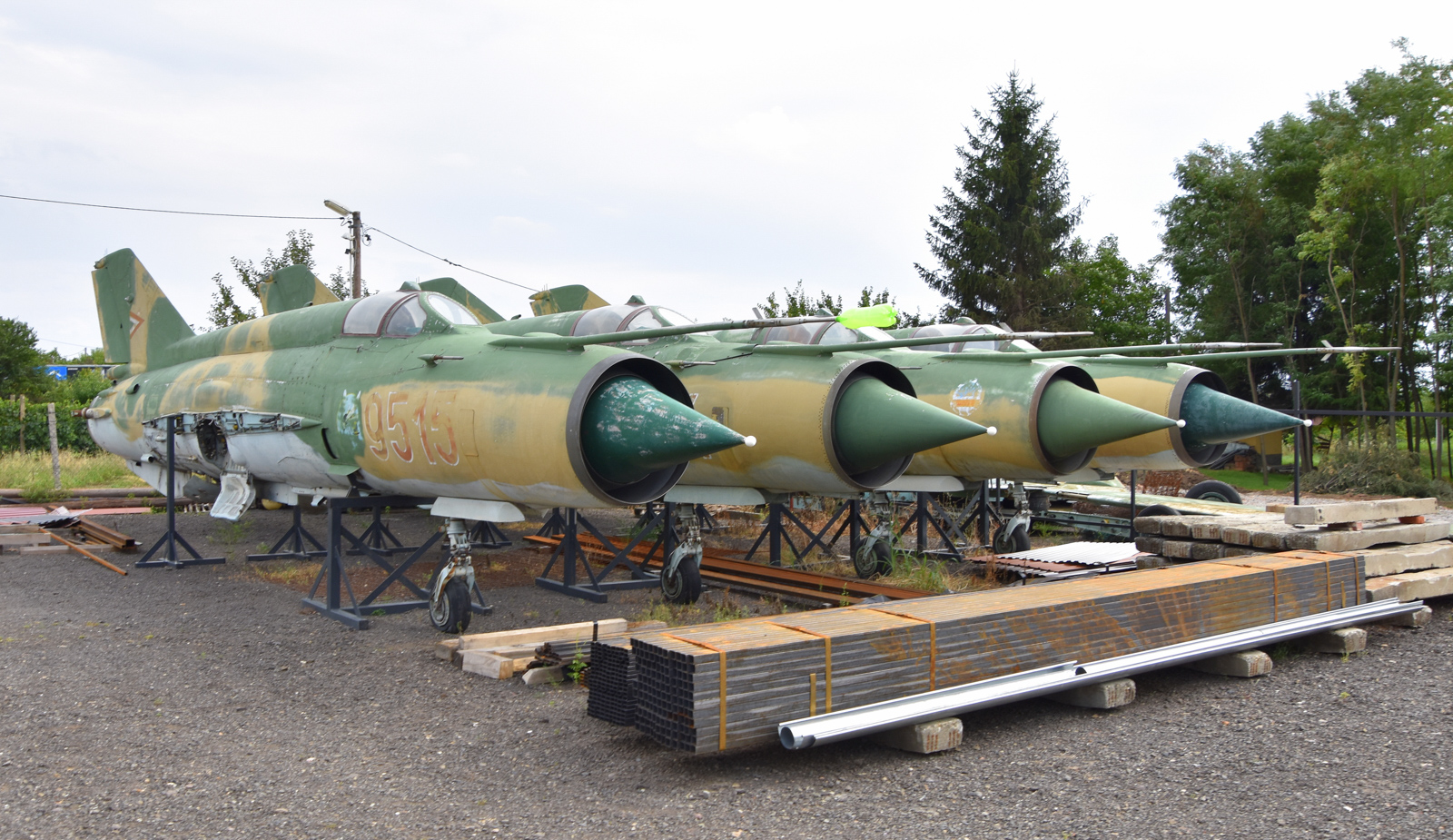 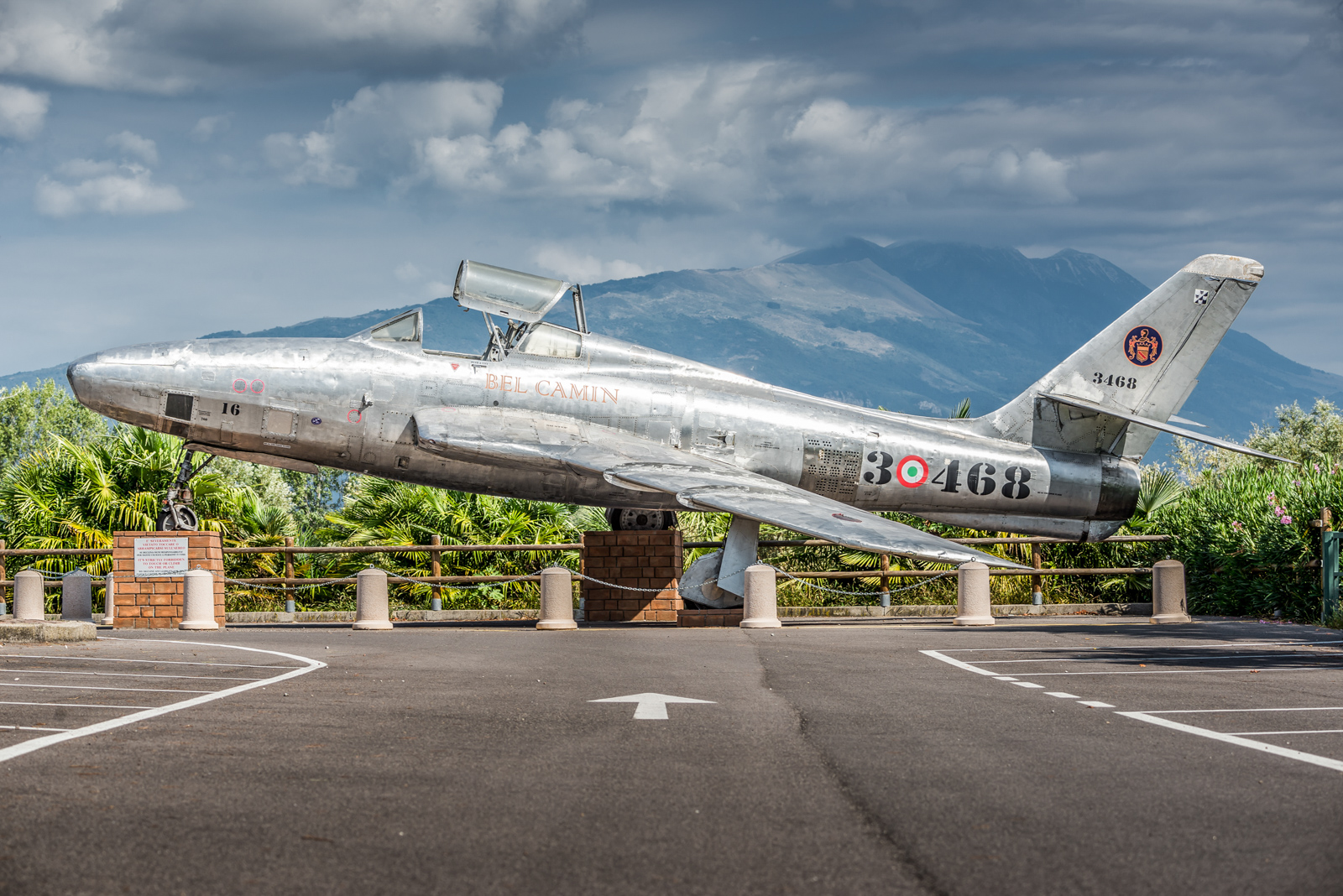 The Malta Aviation Museum’s airworthy Piper Cub was believed to be the 44-79580 (c/n 11876). However it is said that this was an error in the register made 1950s when the aircraft became F-BBIN. The Piper carries its correct identity. The expected Italian AB212 arrived at the museum on a trailer on 13 October.

The Bulldog was transferred to the Institute of Engineering and Transport department of the Malta College of Arts, Science and Technology (MCAST). This should be at the main campus at Triq Kordin.

A new museum, named Muzeum Dywizjonu 303, is being set up in a field near Gierloź, just east of Ketrzyn (N54.08135, E21.46787). The two aircraft used to be parked at the miniature park three kilometres to the east along the same road. The new museum also has An-2T SP-KTK and replicas of a Hurricane and Mustang. 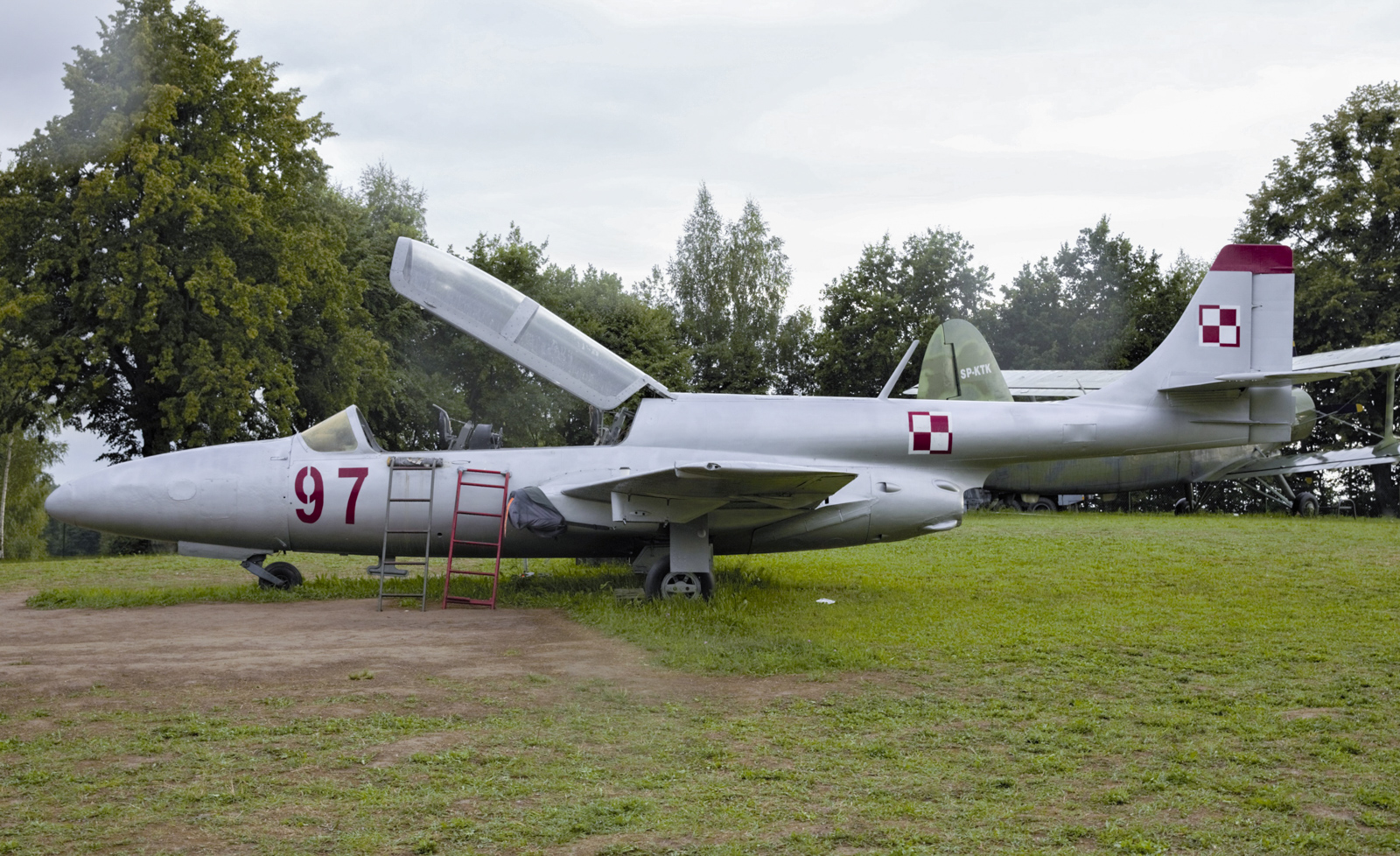 Last year Polish Mi-24s 739 and 741 were noted in the museum. They were not seen in October 2021, instead a former Hungarian aircraft is now here. The two Polish aircraft are now at Inowroclaw. 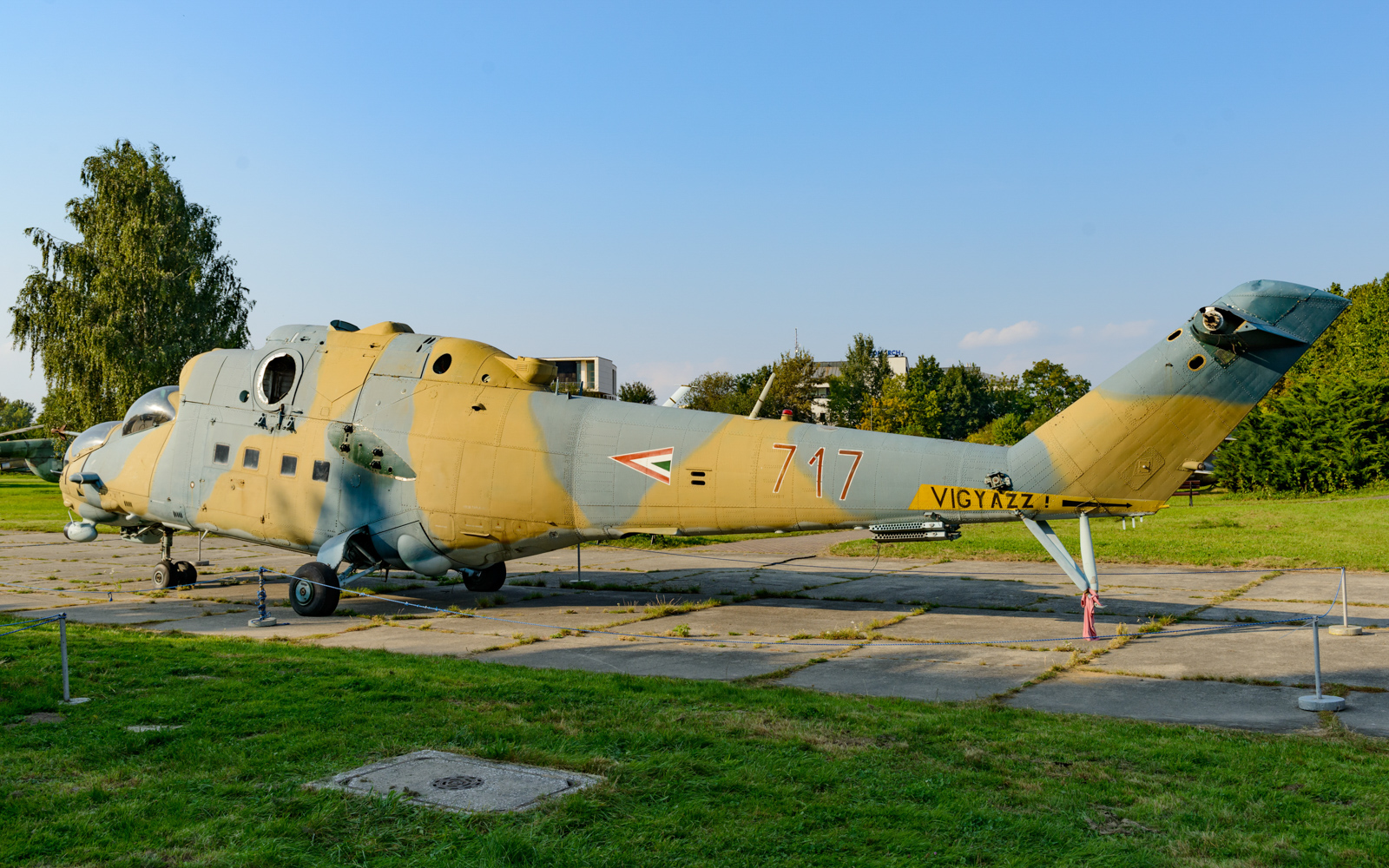 In 2020 two Polish Mi-24Vs were reported as stored at the Muzeum Lotnictwa Polskiego at Kraków Rakowice. By mid-2021 these two we seen at Inowroclaw and in the museum they are now replaced by Hungarian Mi-24V 717. A month earlier this aircraft was still stored at Szolnok. (14 September 2021, Erik Sleutelberg)

Both Iskras are flown by Fundacja Biało-Czerwone Skrzydła (white-red wings foundation) from the aero club side of the airfield (N50.32584, E21.44984).

Both are flying from this airfield. 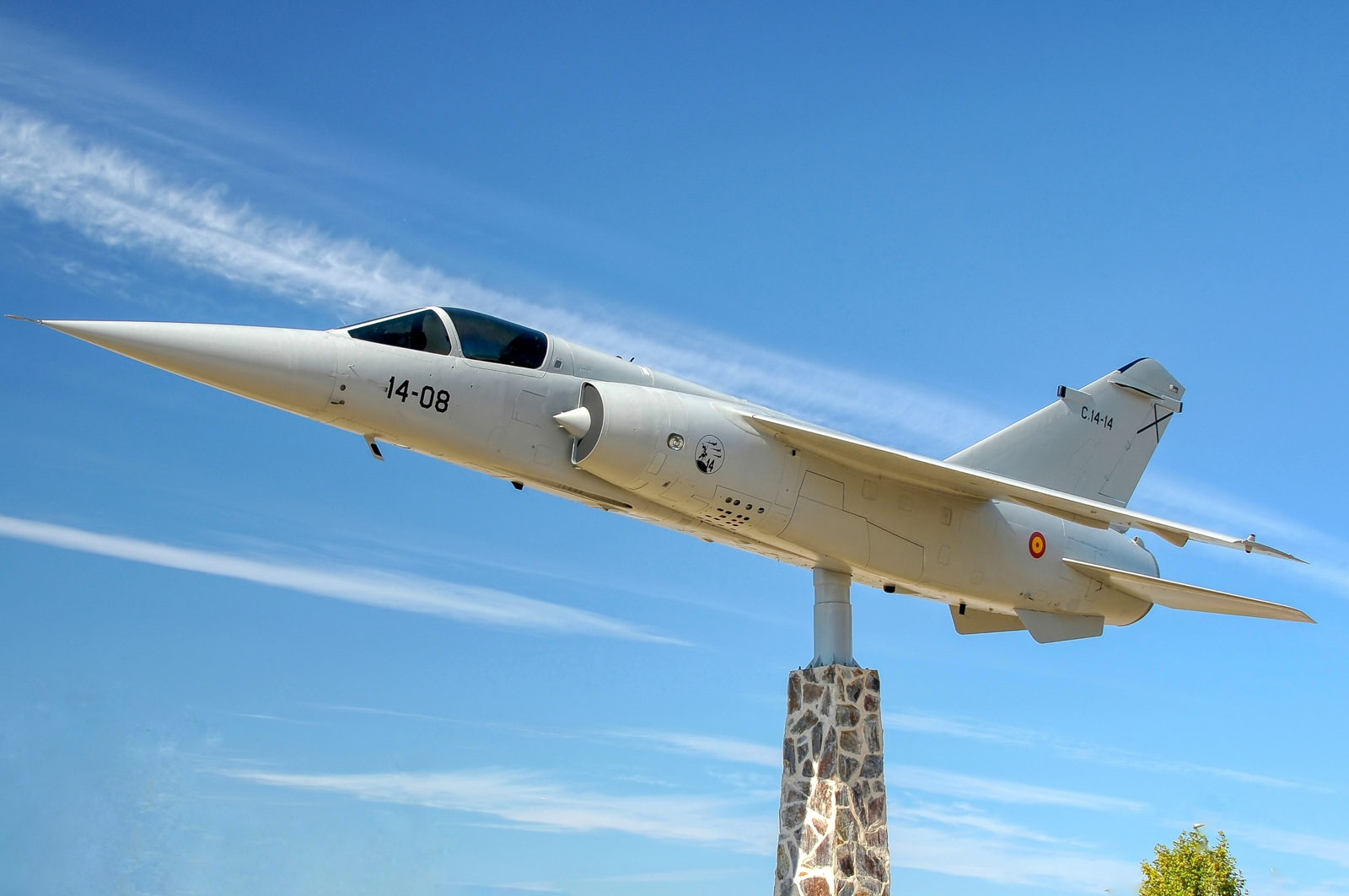 All are stored rotor-less outside on the base in one line, with the exception of HT.17-02 which was further around the back.

The Bo105 and UH-1Hs were stored opposite of the line of Chinooks.

The Mirage has joined the other aircraft outside the main gate. Both C101s were noted parked on the ramp. 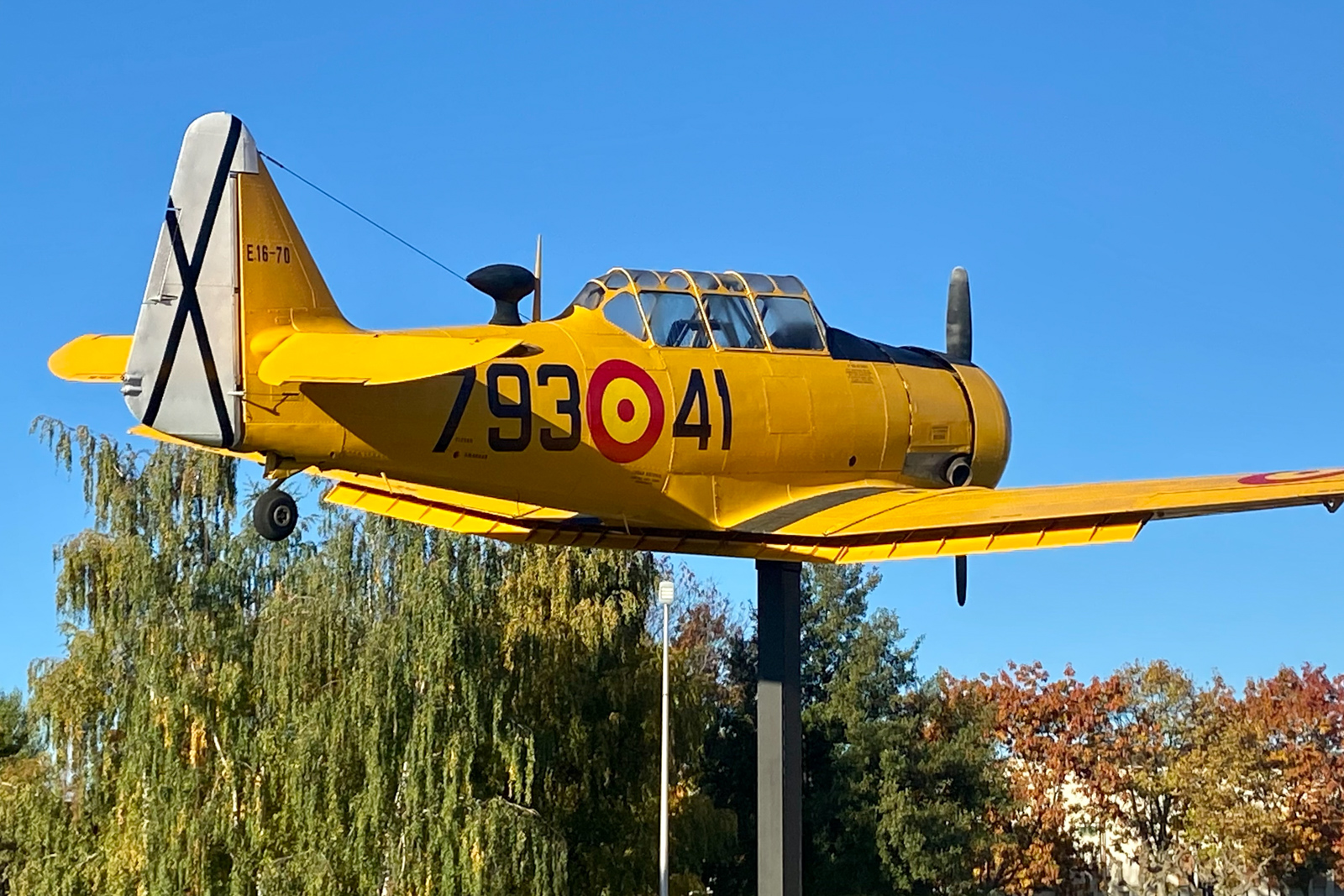 Spanish T-6G E.16-70/793-41 has served for more than 30 years as instructional airframe at León Air Base. In September 2021 the Harvard was pole mounted in splendid condition at the village of Valverde de la Virgen, which is near the main gate of the air base. (24 October 2021, Hans van der Vlist)

The marine museum has moved their Bell inside the museum and gave it a new code (was 01-114). 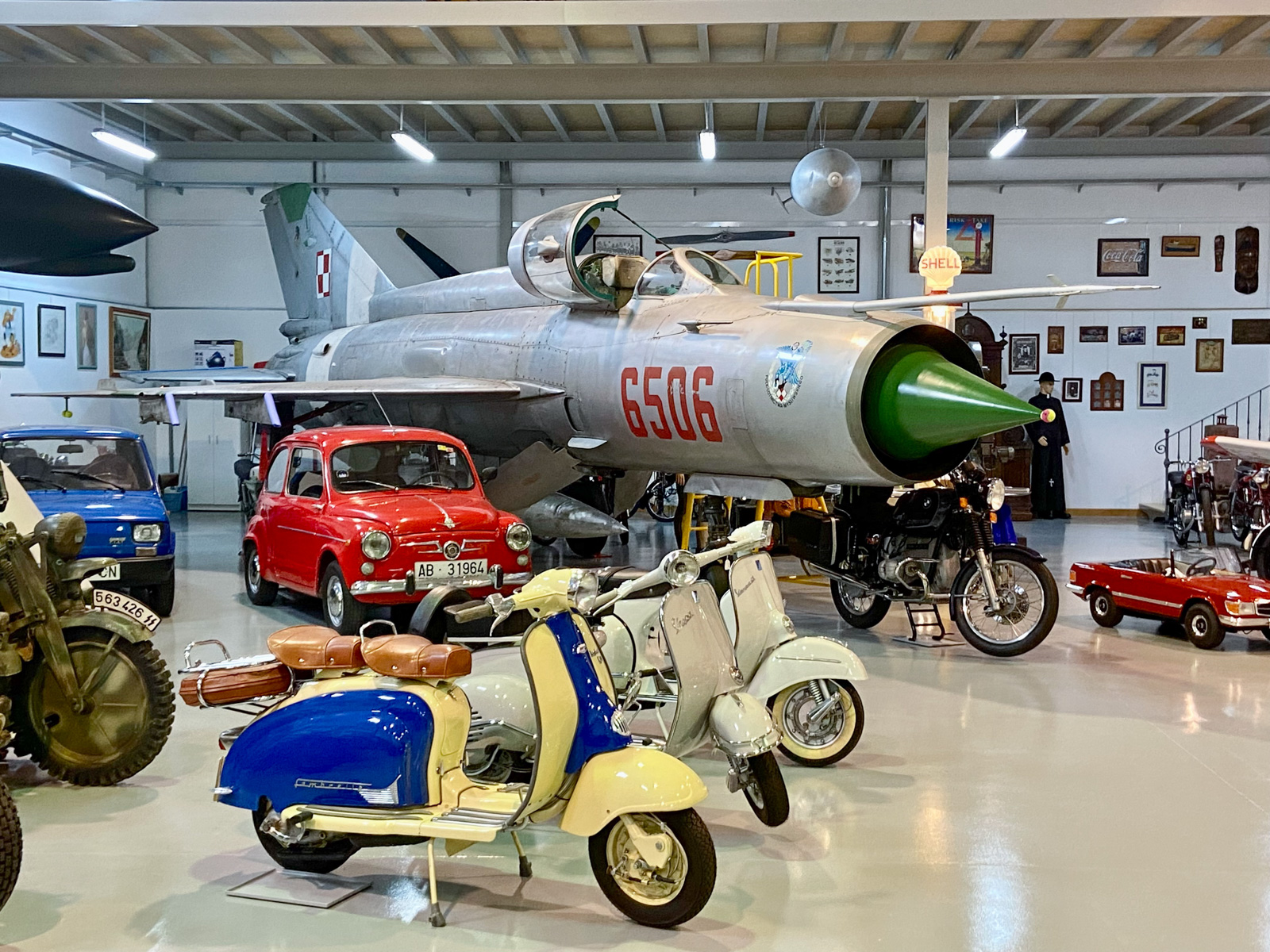 Although this Polish MiG-21MF 6506 has been at Barrax, Spain, for over twenty years, it is not often seen as it is with a private collector in a spottersproof building. (22 October 2021, Hans van der Vlist)

The new Bucker museum was opened on 3 July. The museum is still a private one, so visits must be pre-arranged via the museum website. A few of the above were noted from outside, the rest from internet photos.

The Antonov is a new arrival at the Military Academy. An-2 10 white, Mi-8T 27 white and 57 white are also still present. 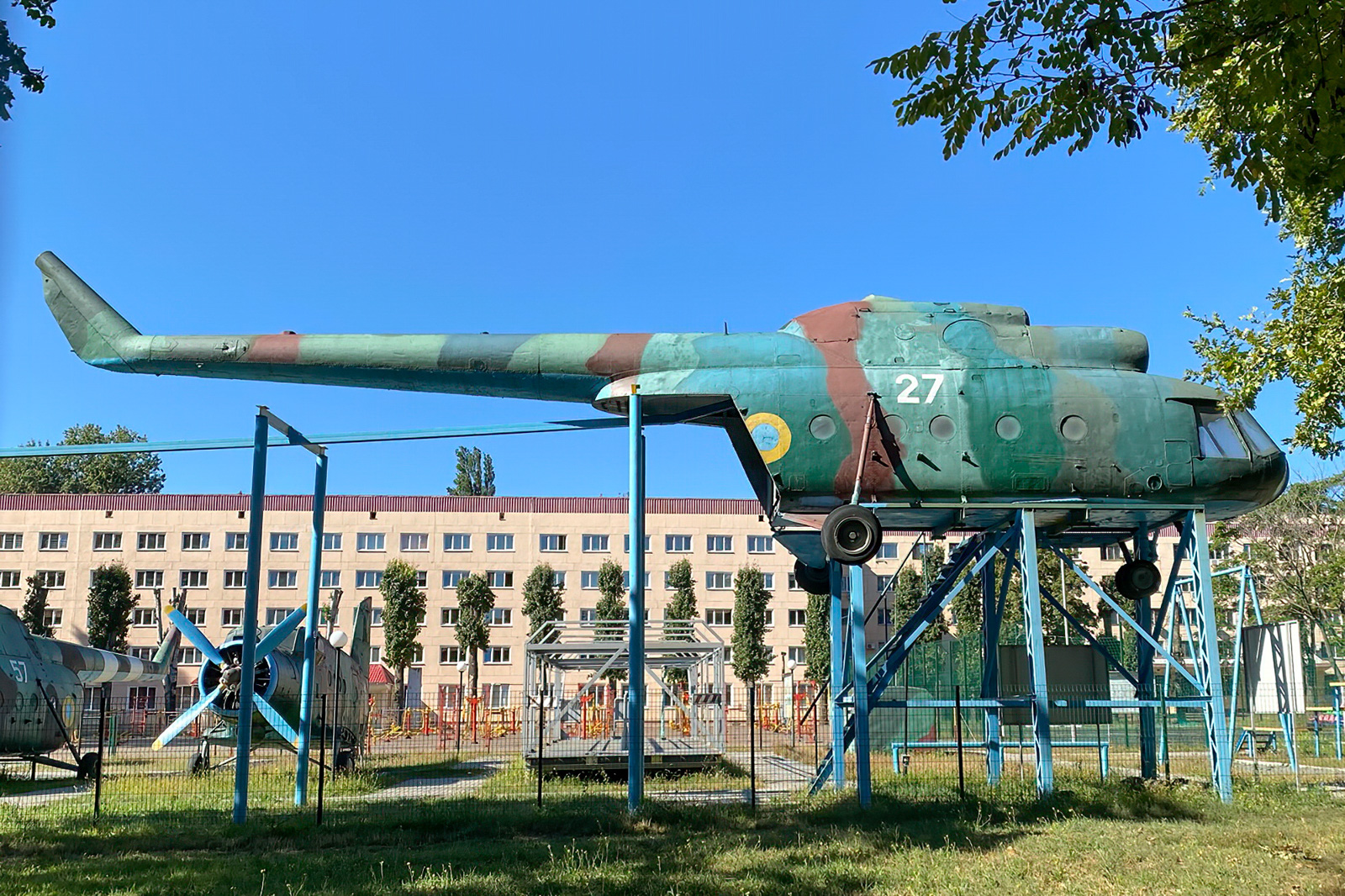 Ukraine Mi-8T 27 white is one of the four aircraft present on the grounds of the Military Academy in Odessa. (20 September 2021, Jurgen van Toor)

Buccaneer S2B XW530, a long-term attraction at the Buccaneer garage, has been sold and will be going to the Scottish Deer Centre at Cupar.

A Jet Provost arrived here for the Aircraft Restoration Group on 7 September 2021 after spending over 16 years in the garden of The Standard public house in Northallerton.

A Jet Provost arrived at Hemswell Antique Centres in early September from a private owner elsewhere in the county. It will eventually be assembled and placed on display outside the Antiques & Retro Antiques outlet.

The Ulster Aviation Collection took delivery of the Tornado from storage at Boscombe Down at the end of September.

A Lynx was trucked in from Sproughton on 13 October 2021, joining XZ179/(G-NCKS) in Hangar 4 with North Weald Heritage Aviation.

The Boscombe Down Aviation Collection took delivery of a Jet Provost from North Weald on 7 October 2021.

The South Wales Aviation Museum took delivery of a Meteor from Gloucestershire Airport on 2 September 2021.

The Tornado was officially handed over to the North East Land, Sea and Air Museums (NELSAM) in September. It had arrived on 28 June 2021 from Manston, via a short time at Boscombe Down.

All three aircraft of non-glider interest were confirmed in September. The Tucano is preserved at the gate, with the two Tornados in training use out on the airfield. 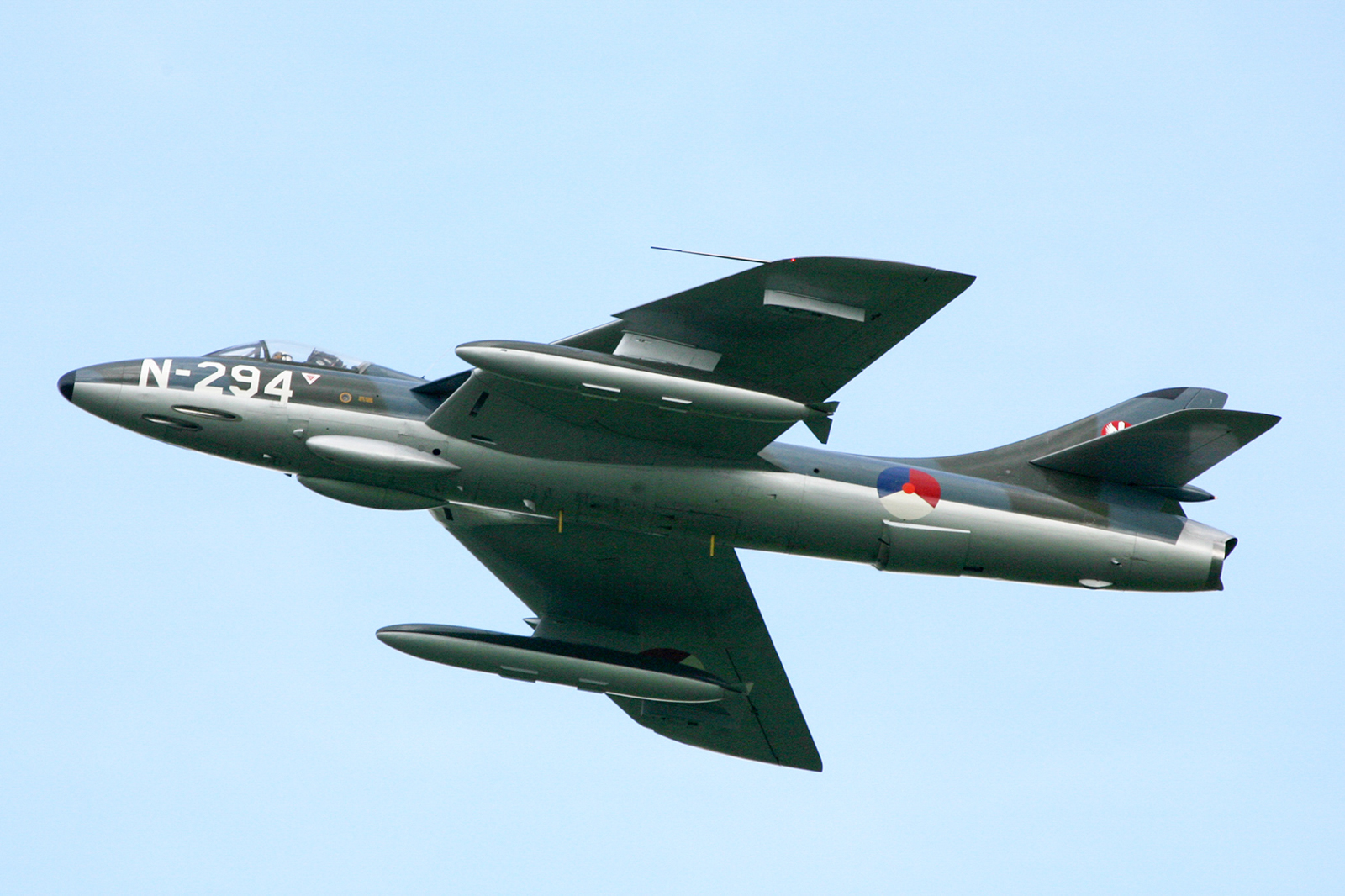