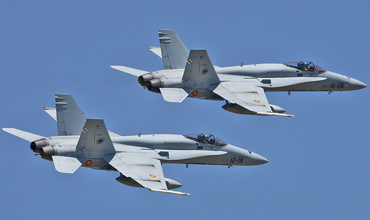 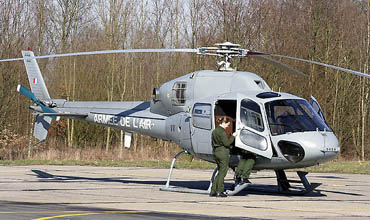 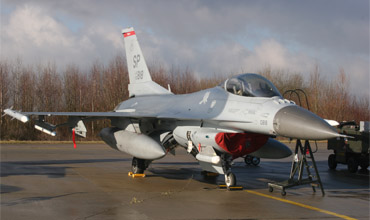 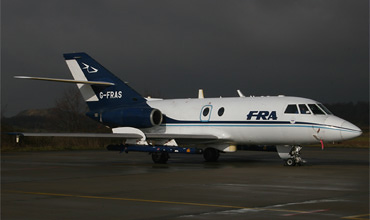 To make up for more realism of the TLP missions, so-called "external assets" are included during certain stages of each flying course. These non-course participants include AWACS aircraft, supporting helicopters, transport and tanker aircraft, ECM/SEAD aircraft and additional fighter aircraft.

A lot of TLP missions are monitored and controlled by a NATO E-3A flying from Geilenkirchen. Operating the E-3 from Albacete on a daily basis for easing briefing and debriefing of missions during flying courses is the preference of the TLP organization but in some cases the AWACS aircraft operate from Geilenkirchen. Also, when UK Sentries or French E-3F aircraft are used, they tend to operate from their own homebases.

Beginning from the first or second week of each flying course, a light transport/liaison helicopter used to be provided by one of the participating air forces. This helicopter is used for transporting TLP instructors/observers to the target areas of some missions. This helps evaluating the "success" of certain sorties. The helicopter is also tasked with search-and-rescue in case of any flying accident occurring during TLP missions. However, lately, this service has not been provided by the participating forces

During week 2, on the friday, the Slow Moving Targets missions includes a slow moving tactical transport aircraft operating in "enemy" airspace, which has to be protected by TLP aircraft against any threats from "hostile" ground and air forces. These mission often result in a C-130 or C-160 provided by one of the participating nations flying for a couple of days.

Additionally, week 2 regularly a long-range-missions takes place (these take up to three hours), involving air-to-air refuelling. Also, this kind of mission is also scheduled during week 3 on the tuasday and thursday. In any case, tanker aircraft normally are provided by the Royal Air Force (VC-10) and the USAF (KC-135) operating from their home-bases Brize Norton and Mildenhall respectively.

Beginning in week 2 or 3 of each flying course, participating aircrew have to cope with "hostile" air-defence, including AAA (anti-aircraft-artillery) and SAM (surface-to-air missiles). These "enemy" forces are realistically provided by NATO AAA- and SAM-units or simulated . As a consequence, the TLP "package" needs SEAD (suppression of enemy air-defences) capabilities in order to conduct successful missions in spite of the "threats". In many cases, at least one participating unit of each flying course maintains special SEAD abilities due to its main or secondary role. In any other case, a SEAD unit is invited by the TLP to take part in the missions. Most common SEAD units are: 52ndFW USAF with HARM equipped F-16CG/DG, 9 and 31 Squadrons RAF with ALARM equipped Tornado GR.4s, JaboG 32 GAF with Tornado ECRs and 155°Gruppo AMI with Tornado ECR's.

The third and fourth week is even more demanding for course participants: They now have to take into consideration a strong "hostile" fighter-force, which could endanger the "success" of TLP missions. This has two consequences: Depending on the scenario, the TLP instructors have to provide realistic "aggressors" which "play" against TLP participants. On the other side, the TLP package needs a stronger fighter escort for the attack aircraft. For both reasons, between four and eight additional fighter aircraft are included in all missions during week and four. For ease of briefing and debriefing, these aircraft normally also operate from Florennes or from the respective deployment airbase, while even more aircraft sometimes operate from their home bases for special missions.

External fighter assets may include any NATO unit with a main or secondary air-defence role (e.g. German F-4Fs, British Tornado F.3s, French Mirage 2000Cs, Spanish EF-18s, Dutch or Belgian F-16s) or specialist "aggressors" like RAF's famous 100 Squadron with their Hawks. Units operating a different type of aircraft than those taking part in the current flying course are very welcome in this role, because this helps course participants distinguishing between friendly and hostile forces. Also different flight envelops and tactical capabilities of these aircraft make up for a good training effect for participating aircrew.

However, for logistical reasons, external fighter "assets" are often provided by units whose aircrew are also involved as course participants. This procedure is very popular amongst Turkish and Greek participating units: While a pair of participating aircraft like F-16Cs is involved during all four weeks of the flying course, an additional pair of the same unit's operational aircraft type is added in the second half of the course, acting either as supporting or adversary fighters, depending on the scenario of each mission.

As a consequence, external fighter assets in most cases consist of a mixture of similar and dissimilar types of aircraft, with the similar aircraft being ideal escorts while dissimilar aircraft are ideal in the aggressor role, but role-switches are possible from mission to mission.

Starting in the summer of 2008, the external assets have been called upon to participate in week two and three. Week 4 with its CSAR exercises did not need a strong Red Air asset after all, while some more Red Airs during the exercises of week 2 would free some participants of this role, improving their training.

In many cases, modern air warfare relies on offensive and defensive ECM (electronic counter measures). As these capabilities are especially required during the more demanding missions in the second half of each flying course, training aids have to be provided. Therefore, a ECM training aircraft is involved in TLP missions during week 3 and 4. Normally this task is provided by a civilian Falcon 20 from Flight Refuelling Aviation (FRA).

However, some flying courses saw a military Falcon 20 from the Spanish or Norwegian Air Force or even a CE-144 from the Canadian Forces taking part in missions. Probably the most rare and therefore very interesting ECM-aircraft taking part in TLP missions so far were pairs of US Navy EA-6Bs (TLP 1994-1 and TLP 2000-2).

A very complex mission is scheduled during week 4, including CSAR (Combat Search and Rescue). For realistic simulation of this kind of operation, one or even more helicopters are included in one or two missions. Sometimes, this task is provided by the regular "TLP chopper" by just switching its role from liaison/SAR to CSAR. More often, additional helicopters are deployed to the TLP base for one or two days. This can involve an additional German UH-1, a Belgian A.109 or even an Italian HH-3F. Some missions even saw a pair of HH-3F plus a pair of Italian Army A.129 taking part, in another case three Belgian A.109s and a pair of Dutch AH-64 were involved, and once upon a time four USAF A-10s were deployed to Florennes for the CSAR mission. However, there seems to be no regularity in aircraft assignment, and external assets for the CSAR mission are always kind of surprise for outsiders.