Brief history
Mauritius is an island in the Indian Ocean, East of Madagascar off the African coast. It is part of the British Commonwealth. Their defence forces are controlled by the national police.

The Mauritius Police has various branches. Two have them have aerial assets, the Helicopter Squadron  and the National Coast Guard.

The helicopter unit created in 1974 operates a handful of helicopters, in fact quite a few for such a small country. Latest acquistion is an Indian-built Dhruv. Most of its original helicopters also came from India, albeit second-hand. 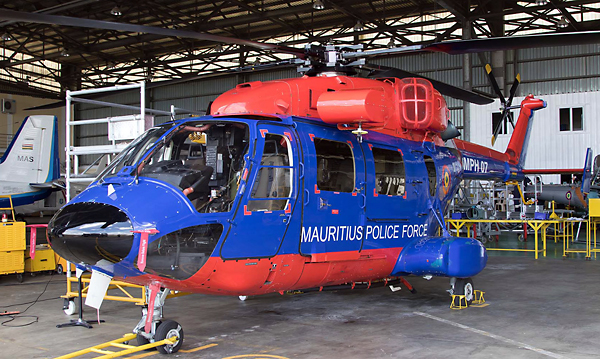 With a 1.8 million square kilometre area of responsibility, the National Coast Guard is a very important branch. From 1974 it was a naval branch operating vessels but on 24 July 1987 it was reorganized as a special branch of the police force given the increasing necessity to combat various illicit activities. Fixed wing patrol aircraft are used since June 1990. Besides the single Do228-101, other aircraft were obtained later. Notably a single BN-2T Islander and another Dornier.