Brief History
The birth of Ecuador is closely intertwined with that of Venezuela and Colombia. After liberating Venezuela and Colombia from Spain, Simón Bolívar went on to support the uprising against the royalists in Ecuador. The first claim to independence was made in Guayaquil in October 1820 and ultimately resulted in the battle of Pichincha on May 24th 1822 when Marshal Sucre led the Ecuadorians to victory over Spain. Subsequently, the State of Greater Colombia was formed by Simón Bolívar consisting of Venezuela, Colombia and Ecuador. This was to last until 1830 when Ecuador gained full independence. Simón Bolívar and Marshal Sucre are still honoured today; the main airbases are named after them.

General information
Ecuador, named after the Equator that runs through the country, is a relatively small country measuring 283,520 square km and, with about 13 million inhabitants, is densely populated by South-American standards. Ecuador has a varied geography with a coastal area, Andean highlands with many volcanoes and the upper Amazon basin.

Brief history
The FAE was officially created on October 27th 1920. However, like in many other countries, military flying activity started before the formal date of birth of the Air Force. The history of Ecuador is marked by many skirmishes with its neighbour Peru. As a direct result of the 1910 Ecuador-Peru crisis the members of Club de Tiro Guayaquil decided to expand their sporting activities to aviation as well. Renamed Club de Tiro y Aviación they started an aviation school. Cosme Renella, who gained his civil aviation license in Italy, was asked as an instructor and the first aircraft that arrived in November 1912 was a Farman. Surviving a crash during a demonstration flight, Capitán Renella went on to fight in Europe during the first World War. Renella was a true ace, as many as 17 combat victories are ascribed to him, and he received several distinctions in Europe. His efforts in the founding phase of Ecuadorian military aviation are still honoured today by naming the Escuela Superior Militar de Aviación after him.

Aviation did not start in earnest until the early forties when a Ecuadorian mission to the United States resulted in the delivery of an assortment of aircraft for the Aviation school at Salinas. Three Ryan PT-22 Recruit, six Curtiss-Wright CW.22 Falcon, six Fairchild PT-19A Cornell and three North American AT-6A Harvard arrived in March 1942, considerably boosting the capacity of the Escuela de Aviación at Salinas.

The fifties and sixties saw a further build up of the airforce, gaining more units and aircraft. Meanwhile efforts were made in enhancing the facilities at various airbases. In may 1961 the First Air Zone (I Zona Aérea) with its subordinate unit Ala de Transportes No.11 was founded. The Second Air Zone (II Zona Aérea) controls the units in the southern halve of Ecuador: Ala de Combate No.21 at Taura, Ala de Rescate No.22 at Guayaquil and Ala de Combate No.23 at Manta as well as the Escuela Superior Militar de Aviación (ESMA) at Salinas.

FAE today
The airforce has a unique mixture of types on its inventory, mostly from Western origin. The prime fighters are the Mirage F.1, Kfir C2, CE, and Jaguar Mk.1 all based at Taura with Ala 21. For advanced training and light attack missions, Strikemaster Mk.89, 90, and A-37B are in use at Manta with Ala 23. These aircraft often operate from airfields in the amazon region.

The transport wing uses various marks of the C-130 Hercules, DHC-6, BAe.748 to transport passengers, haul cargo and support the units deployed to the secondary airfields dotted around the country. Ala 11 has its own 'commercial' branch, like in many other South-American countries, the Transporte Aérea Militar Ecuatoriana (TAME). Besides the military transport aircraft, they also use Boeing 727 and Fokker 28 aircraft. Flying to locations off the beaten track, mostly lacking service by a commercial airline, TAME provides an additional service to the people of Ecuador. Presidential transport is among the tasking of Ala 11 as well; several Sabreliners are in use for this mission.

The FAE saw action on several occasions. A history of border disputes with Peru over the south-eastern Cenepa area saw escalation in 1981 and 1995. The FAE managed to down nine Peruvian aircraft in this last conflict, among which were one A-37B, two Su-22 and several Mi-8.

Besides the threat of its southern neighbour, the conflict believed being subdued by the 26 October 1998 Brasilia peace treaty, the FAE faces the war on drugs as well as many humanitarian and logistic missions into the amazon region of the country. Being a small country, supporting the relatively large airforce with a variety of aircraft types, is a burden. Nevertheless, with the perils of the recent past and present War on Drugs acting as an incentive, the FAE is dedicated to maintain a high profile.

Brief history
Although the idea of founding a naval air arm dates back to 1952, the aviation branch of the navy only formed in 1967. In march 1968 it became a subordinate division resorting under the Primera Zona Naval. Starting off with fixed wing aircraft, the first helicopters followed in 1973. It is a compact and relatively modern force. 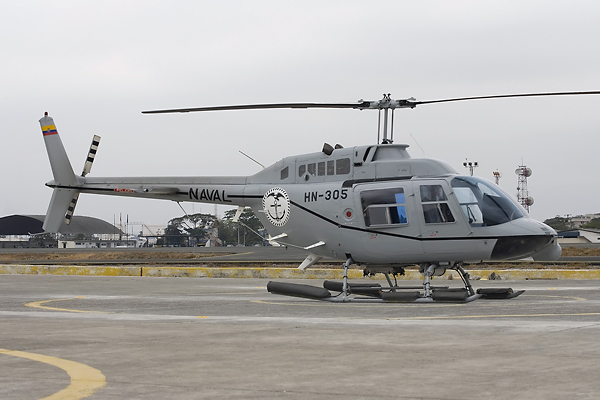 Most aircraft are based at Base Aérea Simón Bolívar in Guayaquil although the new UAVs are at Manta. Also, the many missions in support of the other naval units and the coast guard sees their aircraft deployed to various locations and frigates.

History
The aviation element of the Army (Ejército) was formed in 1954 originally named Servicio Aéreo del Ejército, it was renamed Aviación del Ejército Ecuatorina in 1978. From 1981 onward the flying elements were concentrated in an aviation brigade, effectively transforming the army aviation into an operational brigade within the army structure. Honouring the army aviation's role in the Paquisha conflict in 1981, the unit was renamed Brigada de Aviación del Ejército No.15 "Paquisha". Finally, in 1996 the AEE gained the status of a full arm within the army recognising its vital role in the Cenepa conflict of 1995. 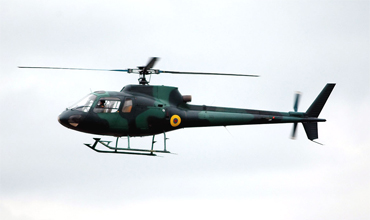 AEE today
The AEE has a large complement of predominantly French helicopters (Alouttes, Lamas, Gazelles, Fennecs and Pumas), but its most recent acquisition is the Russian Mi-171. The transport fleet consists of a variety of fixed wing types: a small quantity of Aravas, a sole surviving Turbo Porter, a single King Air, Buffalo and CN.235 make up the transport and liaison element of the brigade. Maintaining such a varied fleet must be a logistical nightmare. The exact substructure is unknown, although the aircraft seem to be allocated to various grupos rather than to the brigade itself.

SAP today
The Servicio Aeropolicial has been around for about thirty years but saw an influx of aircraft and helicopters in this century.

Some of these were impounded aircraft, whereas others were temporary leased awaiting new helicopters. SAP operates both fixed wing aircraft and helicopters from nine bases throughout the country.