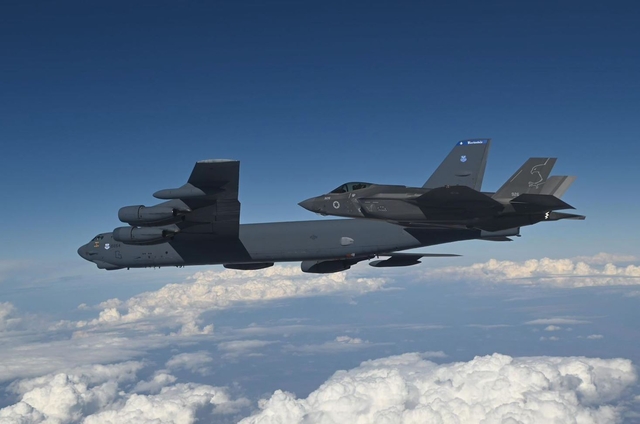 US bombers escorted by Adirs

On a permanent basis, the USAF deployes two bombers to the Middle East region to support the Pacific Air Forces’ BTF missions. The aircraft, which rotate from US based units, are temporary based at Al Udeid Air Base (Qatar) and at Naval Support Air Facility Diego Garcia.

The BTF missions demonstrate the commitment to US allies and partners through employment of military force. Multiple sorties will be flown throughout the deployment in support of multiple geographic combatant command objectives and training requirements.

During this specific flight, two Heyl Ha'Avir (IAF, Israeli Air Force) Lockheed Martin F-35I Adir fighters from 116 Squadron Southern Lions at Nevatim Air Base (Israel) flew alongside the bombers at different intervals and locations. This flight marks the sixth so-called ‘presence’ patrol mission that US bombers have undertaken in the Central Command area of responsibility this year. The Stratofortress bombers operated from Al Udeid Air Base.