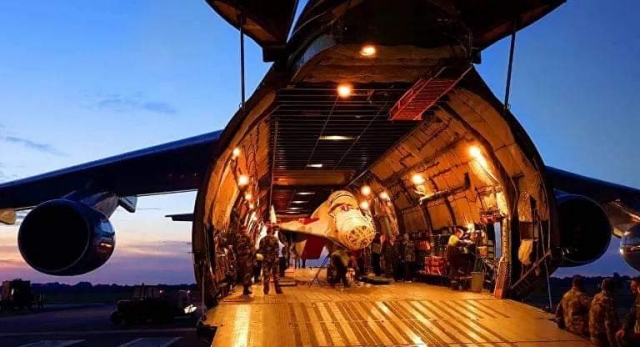 On 25 February 2019, the four MiG-29s were officially handed over to the Serbia Minister of Defense, Aleksandar Vulin, during a ceremony in the 558th ARZ (Aviation Repair Plant) at Baranovichi (Belarus). In that same month, the 558th started the overhaul and modernisation of the quartet fighter aircraft.

Most likely, the MiG-29s have been modernised to the same standard as the MiG-29s currently in service within the Serbian Air Force and Air Defence. In additional to the overhaul and modernisation, the service life of the aircraft has been extended to 4,000 flight hours. The first overhauled and modernised MiG-29 made its first flight in Q4/20. It was originally planned that the modification and delivery programme would be completed by the end of 2020.

Serbia already had ten MiG-29s in its inventory. Out of the original sixteen MiG-29s (fourteen 9-12B single seat and two 9-51B dual seat) delivered to Yugoslavia, only three MiG-29s and one MiG-29UB remain. In October 2017,  these were augmented by six MiG-29s (one 9-12A and three 9-13 single seat and two 9-51 dual seat) donated by Russia. Shortly afterwards, overhauls and life extensions started on three aircraft inherited from the former Yugoslavia. At the end of 2018 all ten fighters were active again, including the one which underwent a general overhaul at the 121st Aviation Repair Plant at Kubinka (Russia).

In October 2020, the Serbian Ministry of Defense (MoD) stated that the last phase, Phase 3, of modernisation of the ten MiG-29s by Russian specialists of RSK MiG started. This modernisation will see the refinement of the existing radars, as well as the improvement of the systems for electronic combat, radio-technical reconnaissance, and procurement of air-to-air and air-to-ground weapons. All work is carried out in a hangar at Batajnica air base.

The Scramble Magazine database shows the following MiG-29s as active. All MiG-29s are operated by 101.Fighter Aviation Squadron (101.lae) at Batajnica air base. L-18/NL-18 is the local Serbian type identification: