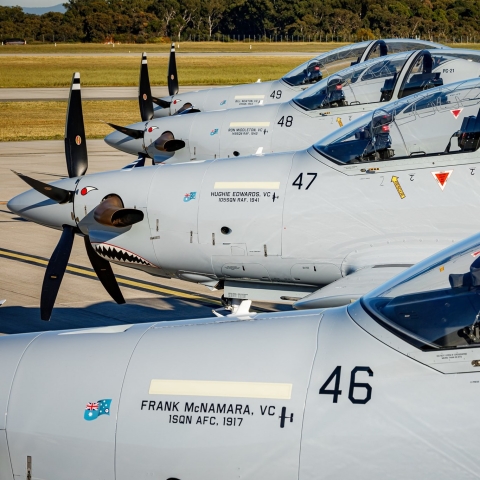 RAAF will replace PC-21s in the JTAC role

The Royal Australian Air Force (RAAF) plans to replace the Pilatus PC-21 in the Joint Terminal Attack Control (JTAC) role with a new off the shelf solution. In July 2022, the RAAF released a Request for Information (RFI) for the desired capability to industry, with a closing date for responses of 11 August 2022.

The Pilatus PC-21 was acquired under Air 5428 Phase 1 (Pilot Training System) from 2017 and four aircraft were subsequently allocated to 4 Squadron Cooperate to Strike at RAAF Base Williamtown (NSW) for the JTAC training role. The Australian Defence Force (ADF) reports that the PC-21 is at best only “80 per cent effective” in the role, as it is unable to carry live ordnance.

ADF has raised Project Air 6016 (Joint Terminal Attack Control System), which it says will deliver a sovereign training system to ensure the sustainable generation of sufficient and appropriately skilled JTACs.

The platform being sought is required to have at least two UHF/VHF radios and the ability to exchange tactical data (voice and data) with JTACs via Link 16 and Variable Message Format (VMF) and capable of broadcasting Full Motion Video (FMV) imagery via Video Downlink (VDL). It is also required to have an Electro-optical/Infra-Red (EO/IR) sensor capable of capturing FMV, in addition to the ability to track and mark surface targets using a Laser Spot Tracker (LST) and be fully certified to operate with Night Vision Imaging Systems (NVIS).

Desired performance is a cruise speed of 180 knots at 5,000 ft and an on-station endurance of at least one and a half hours at that altitude. It is desired to have a maximum range of at least 600 nautical miles, a maximum operating altitude of 25,000 ft and a load limit factor of at least +4/-1,5 G.

Project Air 6016 was included in the 2020 Defence Integrated Investment Plan and the ADF says the budget will be “sufficient to address the various options being assessed”. However, ADF has yet to decide between a Contractor Owned/Contractor Operated (COCO) or Contractor Owned/Government Operated (COGO) model of acquisition under a Supplied Services Contract (SSC).

It has not been reported which industries have been approached for the RFI. Scramble Magazine assesses that possible candidates are the Textron AT-6E Wolverine, the Embraer EMB314 Super Tucano and the TAI Hürkuş HYEU.

The four PC-21 aircraft currently used with 4 Squadron will likely be released back to the Pilot Training System for use with the Central Flying School (CFS) Qui Docet Discit (He Who Teaches Learns) at RAAF Base East Sale (Vic.) and/or 2 Flying Training School (FTS) Seek the Heights at RAAF Base Pearce (WA).