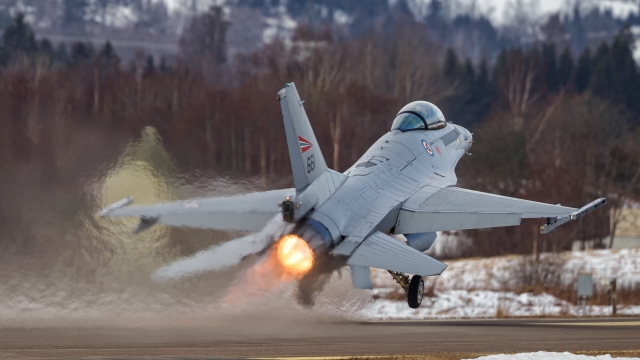 The Norwegian Defence Material Agency (NDMA) has contracted Kongsberg Aviation Maintenance Services (KAMS) to maintain a number of Luftforsvaret (RNoAF, Royal Norwegian Air Force) F-16 Fighting Falcons that have been taken out of active service and make them ready for commercial re-sale.

The contract initially applies for two F-16s, with an option to overhaul up to three additional aircraft. The work on the F-16s will take place at KAMS’ facilities at Kjeller, near Oslo, and if the option is exercised the last three aircraft are expected to be ready by the end of 2021. The fighters will be returned to operating status and then maintained so that they are ready for service again. KAMS has 40 years of experience in maintaining, repairing and upgrading Norway’s F-16 fleet.

A large number of RNoAF F-16s may potentially be relevant for repair and be readied for sale. This could result in considerable activity for KAMS at Kjeller. The NDMA is making efforts to achieve the best possible sales gain on the sale of the aircraft.

Jonny M Otterlei, Technical Director with the NDMA, stated that more nations will be selling their F-16 aircraft in the near future. "Our market surveys show it’s a good idea to create an attractive offer as regards the aircrafts’ quality and remaining flight time. This contract with KAMS gives us such an opportunity and this contract also helps to maintain Norway’s industrial expertise in fighter aircraft maintenance.”

Norway was one of the four initial European Participating Air Forces and ordered a total of 74 F-16A/B Fighting Falcons. Of these, 56 were updated under the MLU programme. The fighters were operated by 331 skv, 332 skv, 334 skv and 338 skv. Nowadays, 331 skv at Bodø is the last operator of the F-16.

Have a look at our historical Air Order of Battle for detailed information on where and when these fighters were used.

According to our information, the following F-16s have not been seen for a number of years and are most probably stored: