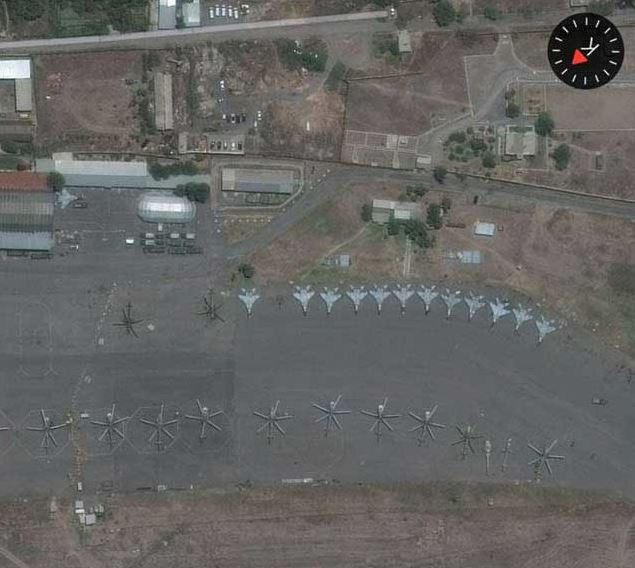 On 21 October 2020, the bulgarianmilitary.com news agency has published an article about Russia having transferred at least thirteen MiG-29s to Armenia in an effort to resolve the ongoing conflict in the Nagorno-Karabakh peacefully. The article is aided by satellite images of the Erebuni airbase near Yerevan (Armenia) showing more than a dozen MiG-29 silhouettes nicely lined up along their designated places on the tarmac, aided by another dozen of helicopters sporting a five-blade main rotor. Since many other servers (AMN, RFI, NewsNow, NewIzv, Avia.pro) have taken over this newspiece, Scramble have decided to shed more light on this issue.

The article is not fake news.. but it is actually no news, at all...

Russian military presence is Armenia has a quite long tradition and their aviation component is located at two airports. The Erebuni airport (ICAO: UDYE) south of Yerevan has permanently hosted the Russian 3624th AvB since 1995 counting 5,000 personnel and its aviation component consists of MiG-29s and a helo squadron armed with Mi-24Ps and Mi-8MTV/MTV-5s. In 2001, the 102nd AvB has been established as a reserve base at the Shirak airport (ICAO: USDG) in the Gyumri military garrison in the western part of the country. Until these days, the 102nd AvB only has a helicopter component, but rotary pilots from both bases regularly train relocation missions from one base to the other.

As already mentioned, the presence of MiG-29s in Armenia is nothing new, these aircraft have been relocated to Erebuni back in 1998. Today, the 3624th AvB is the last combat operator of the classic non-upgraded Fulcrums in the Russian Federation - Aerospace Forces (RF VKS, Russian Air Force). The component consist of seventeen single-seaters of the Izd. 9.13 type (NATO code Fulcrum-C), a single early version Izd. 9.12 (Fulcrum-A) and two Izd. 9.51 twinseaters (MiG-29UB Fulcrum-B) of which eighteen are said to be active. The mentioned 9.12 registered RF-92181 (Bort No. 15 Red, cn 2960526360) was manufactured in 1989 and is pretty much the last Fulcrum-A to be operated by a Russian frontline unit. Back in 1993-94 the whole inventory underweant a major overhaul, the combat aircraft went to the 275th ARZ (Aircraft Repair Plant) in Krasnodar, while the two trainers were repaired at 514th ARZ in Rzhev.

Therefore, a presence of fifteen MiG-29s on  a satellite image from Armenia (not thirteen as reported, we have counted them all) is by no means a big deal, it’s just a daily routine at the Russian air base at Erebuni, as it has been for the last 22 years. According to the news of the Russian Ministry of Defence from April 2019, all eighteen active MiG-29s are planned to be replaced by much more advanced Su-30SM multirole fighters. The delivery should be completed in two stages by the end of the year 2021 and the pilots will be retrained at the Russian Top Gun school, the 4th Center for Combat Employment and Retraining of Personnel in Lipetsk. 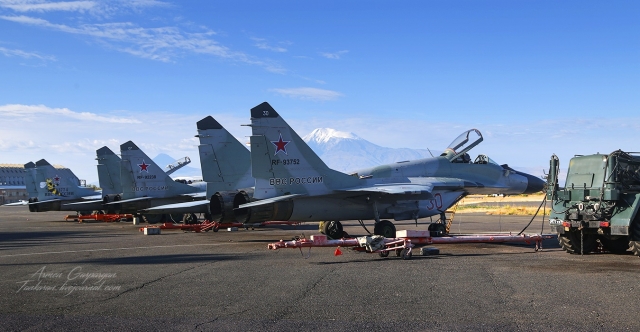