(Much) more information on the new Sukhoi Su-75!

Scramble reported earlier this week on the new Sukhoi Su-75, and now its time for more, in depth, information regarding this future Russian 5th Generation light single-engine fighter (LTS).

As already reported, the State Corporation Rostec and JSC United Aircraft Corporation (UAC) have presented their latest creation at the International Aviation and Space Salon MAKS-2021 in Zhukovsky on July 20, 2021. A new light single-engine fighter of the fifth generation developed by PJSC Sukhoi Company (as part of the UAC) under the LTS (Light tactical aircraft) program was introduced under the commercial name Checkmate. The LTS aircraft was developed in complete secrecy as the spoiler presentation announced on 13 July was seemingly a big surprise for the entire aviation community.

The LTS is undoubtedly a significant asset for the Russian military aviation, as it is only the third combat aviation platform developed in Russia after the fall of Soviet Union in 1991 – the first one being the Yak-130 and the second one the Su-57. Now it’s time to summarize all information from the presentations and publications of the LTS aircraft.

While the LTS program has been running since 2018, the demonstrated sample at MAKS-2021 has been developed in a little more than a year. It is not a mock-up as originally thought, in reality it is something Russians call the KNS which means complex full-scale stand.

An interesting add-on has been provided by the deputy chief designer of the LTS Alexei Bulatov, who said that this KNS vehicle (unlike the bare-painted T.50-0 for the Su-57) will be converted to a flying prototype after the static ground tests will have finished. The rework shall take less than a year to complete and the first flight is scheduled for 2023. Additional prototypes are planned for 2024-2025, the completion of state tests is set for 2026. The first customer delivery was quoted to take place in 5,5 years from now (end of 2026).

The LTS is the first Russian aircraft to be fully calculated by digital methods, its design process was accelerated due widespread use of supercomputing technologies. The scientific and technical groundwork to this approach was obtained during the creation of the PAK-FA concept and the LTS uses many design nodes, elements and systems of the Su-57, incl. flight computers, cockpit instrumentation, AI logic, front fuselage section, engine and flight control system. 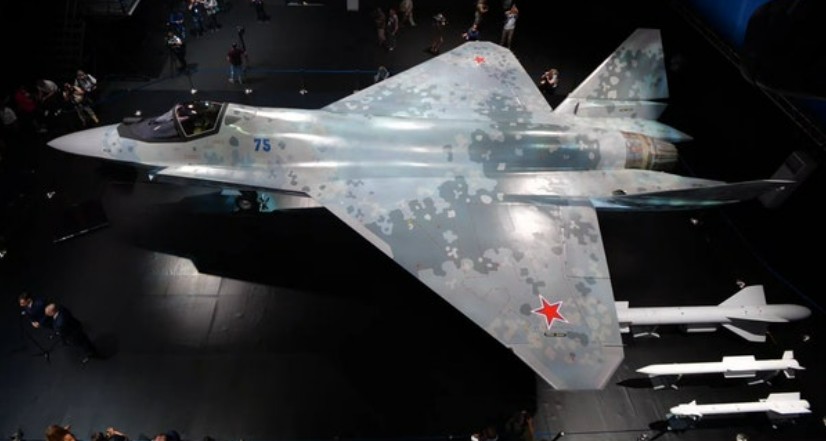 The presented sample bears the side number 75 Blue, reg. RF-00075. That might indicate the project designation T.75 within the Sukhoi Design Bureau. At the same time, the proposed name index for the aircraft within the future VKS service is Su-75, not Su-59, as erroneously stated before. The series aircraft shall be built at the KnAAZ Komsomolsk-on-Amur Aviation Plant (a branch of PJSC Sukhoi Company).

Although the aircraft is officially regarded as UAC‘s own development initiative without the assignment of the Russian Ministry of Defense, various sources indicate that a part of the R&D funding came from the Russian Ministry of Industry and Trade (similar to what we have seen with the PAK-FA program) and the layout and design work was coordinated with the military the whole time.

It is also assumed that a portion of funding might have come from foreign sources, most notably from UAE, in accordance with the cooperation agreement signed in 2017. This goes well with the claim of the Russian Deputy Prime Minister Yuri Borisov who mentioned that all design works were directly coordinated with a certain foreign air force who represented a launch customer for the new Checkmate fighter.

Some of the characteristics of the LTS aircraft were already presented: max. speed up to Mach 1.8-2.0, service ceiling 16,500 m, max. allowable overload 8g, a maximum payload capacity 7,400 kg and flight range of 3,000 km. The chief designer of the LTS Mikhail Strelets mentioned the goal was to get the longest flight range / loitering time for any light aircraft on the market combined with the highest carrying capacity.

The weight parameters were not officially presented. Originally, the weight was announced to be 18-20 tons but this does not quite correspond with Bulatov‘s claims of the powerplant to be in the 14,5-16 t class. It is quite possible that the future Izd.30 based engine will not have been finished soon enough and that the initial series of the LTS will have to rely on some Izd.117 derived powerplant, not allowing the fighter to reach the promised thrust-to-weight ratio of one.

The engine will use controlled thrust vectoring. Very interesting statements were made about the possibility of a STOVL variant of the LTS, although no technical details about possible implementation of such technology were given (pure vectoring of the engine thrust or the installation of additional lifting engine)

The characteristic feature of the LTS is the the absence of tail stabilizers. However, there are small controlled surfaces on the sides of the engine, a solution largely adopted from the rear-hinged „canards“ of the Su-57. The avionics of the LTS, too, is based on the systems of the Su-57 aircraft. The AESA radar will be an N036 with reduced number of T/R modules, with a possibility of simultaneous tracking of 30+ targets and fire control solution for 6 targets at once. The open architecture also enables installation of other equipment of Russian or foreign origin.

Sukhoi has apparently found some inspiration in the F-35, as well. A new wide-range all-angle optical view system similar to EODAS/OTS was installed on the LTS under the fuselage. Another system, ideologically borrowed from the F-35’s ALIS and ODIN, is the Matreshka automated logistic support system with the ability to plan preventive and repair work, streamline the maintenance operations, allow automated AI-based preflight checks, significantly reduce the cost and increase the efficiency of after-sales service. The acquisition cost of the LTS was quoted at USD25-30 million, the cost of a flight hour was quoted „seven times less“ than the F-35 which is currently estimated at 31-33 thousand dollars.

The primary weapons will be located in the main ventral weapon bay which can house three air-to-air missiles, two larger air-to-surface missiles, guided bombs or a fuel tank. There are two additional lateral weapon bays along the sides in front, each one holding one air-to-air missile and four optional underwing external pylons for non-stealth mode missions. The exhibited prototype had one Kh-38MLE and one Grom-E1 missile in the main bay. 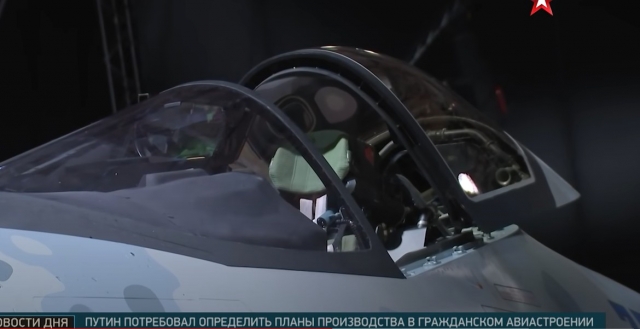 The presented and listed weaponry included RVV-SD and RVV-MD air-to-air missile, Kh-31PD, Kh-35UE, Kh-38MLE (MTE), Kh-58UShKE, Kh-59MK, Grom-E1 and Grom-E2 guided missiles, KAB-250LG-E, K08BE and K029BE guided aerial bombs, S-8 and S-13 unguided rockets, as well as unguided aerial bombs of calibers 100, 250 and 500 kg. Just like the F-35B/C, the LTS aircraft will not be equipped with an internal cannon, the cannon armament was only offered in the context of suspended cannon containers which can be installed in the armament bays.

According to head of the PJSC UAC Yuri Slyusar, the LTS was set up as a platform with modular modification potential which is implemented by replacing the fuselage head section and adaptation of systems. This way, the platform can easily be converted to a two-seater, as well as an optionally piloted or a fully unmanned version, all capable to operate within a network-centric combat system combining groups of manned and unmanned aircraft. For this task a new 5th Gen OBE onboard system was developed. The head of the UAC laid out a business plan for ca 300 aircraft in the next 15 years based on the market analysis, with the hope of attracting further interest of the Russian Aerospace Forces.