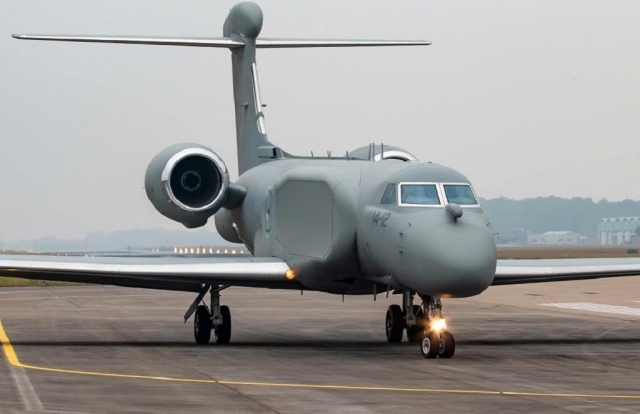 Signals intelligence became a substantial aspect of intelligence collection management. Traffic analysis, the study of who is signaling whom and in what quantity, is also used to integrate information again.

Most Air Forces have dedicated aircraft full of sensors and radars and the Aeronautica Militare (ItAF, Italian Air Force) was no exception. But with the withdrawal of their Alenia G222VS MM62107 (msn 4012) in 2012, they faced an intelligence gap.

This particular Gulfstream was a flying intelligence surveillance reconnaissance test bed from Lockheed Martin and equipped with an electro-optical sensor and ground data link, in addition to communications intelligence, electronic intelligence equipment.

As part of the contract, Lockheed crew provided sensor training to the Italian Armed Forces in Italy, while Aeronautica Militare pilots were trained in the United States. The aircraft was returned to Lockheed Martin in November 2013.

The training and experience resulted in a contract to buy two E-550As, which are based on the Lockheed Martin Gulfstream G550. They, MM62293/14-11 (msn 5429) and MM62303/14-12 (msn 5454) were delivered in 2016 and 2017 from the manufacturer at Savannah (GA) to IAI (Israel Aerospace Industries). The E-550A contract followed Israel’s decision to purchase thirty Leonardo (then Alenia) M-346 advanced jet trainers. IAI was responsible for the Early Warning and Control (AEW&C) multi-band radar system. Both aircraft were again stationed at the Aeronautica Militare 14° Stormo (Wing) at Pratica di Mare Air Base.

In 2020, the Italian Ministry of Defence published their multi-year planning document for 2020-2022 (Documento Programmatico Pluriennale) showing a major boost to its defense budget. One of the priorities was the C4ISTAR platform (Command, Control, Communications, Computer, Information/Intelligence, Surveillance and TARgeting) that is based on the Gulfstream G550.

As a result of this priority, the US Defense Security Cooperation Agency (DSCA) approved a possible foreign military sale to the Italian government of two Gulfstream G550 CAEW on 15 December 2020. On 7 March 2022, the first example with Matricola Militare (military registration) MM62329/14-13 (msn 5581) landed at Pratica di Mare Air Base.

With this new Joint Airborne Multi-Sensor Multi-Mission System (JAMMS), the Italian Air Force has a C4ISTAR platform equipped with modern sensors for real-time sharing of information. Not only to collect and share data and information more efficiently, but also battle management for the digital battlefield.

In December 2020 the Italian Ministry of Defence again published plans to buy up to eight new Lockheed Martin Gulfstream SIGINT aircraft and build a maintenance hub for similar aircraft operated by other nations around the Mediterranean. The plans, which were outlined in documents supplied to the Italian parliament, would reinforce Italy’s signals intelligence capability as the Mediterranean becomes a flashpoint for regional tensions with neighbours like Turkey, Egypt tussling over the future of lawless Libya and not to forget, the present war in Ukraine.

With up to ten Lockheed Martin Gulfstream G550s in its fleet, Italy would build up a maintenance operation which would not only serve its own aircraft but be able to “offer services to the Gulfstream fleet operating in Europe and the Middle East, with about 200 jobs created,” the document stated. No indication was given about which company would be contracted to supply the two converted jets or carry out the conversion work on the other six, till now.

IAI has signed contracts with Italy worth about $550 million for the sale of two more G550s, as well support and ground logistics services for the Aeronautica Militare. They will be similar to the Gulfstream V Nachshon Shavit aircraft that serves the Israeli Air Force.