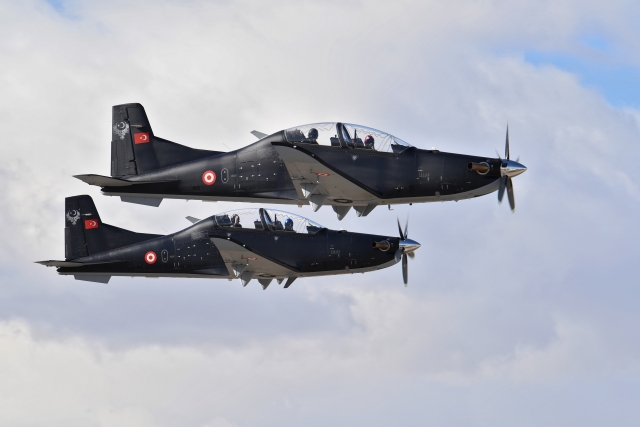 Hürkuş in the FAC role to be delivered

Thanks to tolgaozbek.com we can report that Turkish Aerospace Industries (TUSAŞ) is about to deliver the first three Hürkuş HYEU Forward Air Controller (FAC) aircraft to 135 Filo at Konya air base. The Hürkuş HYEU was developed from the training version of this indigenously developed trainer, the Hürkuş B. A total of six Hürkuş HYEU will be delivered to the Türk Hava Kuvvetleri (TurAF, Turkish Air Force).

HYEU stands for Hava Yer Entegrasyon Uçagi, which translates literally to Air to Ground Integration Aircraft, hinting towards the versatility of the roles which can be to train Forward Air Controllers, Forward Combat Controllers and Joint Fire Support Teams. Additional advancements have already been planned and the aircraft will eventually be fitted with an Electro-Optical/Infra-Red (EO/IR) camera, laser-guided and unguided training munitions, as well as an autopilot system.

Interesting is that the manufacturers type-designation of the Hürkuş is TT32 and the Type Certificate holder is TUSAŞ‐TÜRK HAVACILIK VE UZAY SANAYİİ A.Ş. / Turkish Aerospace Industries, Inc. (TAI).

Internal users
As far back as December 2013, the TurAF ordered fifteen Hürkuş B basic trainer aircraft with an option for an additional forty aircraft. Deliveries have yet to take place.

During IDEF in May 2017, the Türk Kara Havacilik Komutanlığı (Turkish Army Aviation Command) placed an order covering the delivery of twelve with an option of twelve additional Hürkus C aircraft. Deliveries were about to take place in 2018.

During 2017 the Türk Jandarma Havacılık Başkanlığı (Turkish Gendarmerie Aviation Directorate) showed interest in The Hürkus-C and a prototype was delivered under a leasing agreement. It is unclear if a firm order has been placed but the Jandarma is reported to be interested in twelve C-models.

Hürkuş exports
In November 2021, Niger became the first export customer for the Hürkuş C. The exact number is still not disclosed but Temel Kotil, the head of TAI said in an interview that the company is about to export twelve Hurkus-C aircraft. Scramble Magazine assesses that this is the same deal.

In December last year, it was rumoured that Turkey’s Caucasus ally Azerbaijan will likely become the second foreign customer of the Hürkuş C. Ismail Demir, Turkey’s chief procurement official and head of the Presidency of Defense Industries announced this but so far no firm orders seem to have been placed.