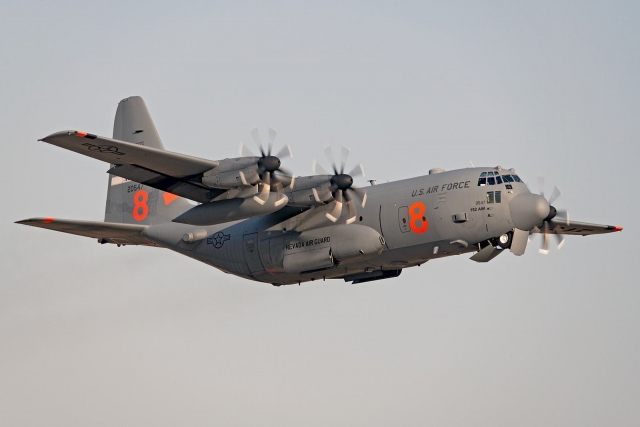 Our regular contributor Dan Stijovich captured this C-130H "Modular Airborne FireFighting System (MAFFS) 8" of the 192nd Airlift Squadron, based at Reno/Tahoe International (CA). It was seen while taking off from San Bernardino International Airport (CA) during firefighting operations in the stricken Golden State.

Strikingly, the C-130H is modified with the new eight-bladed Hamilton Sundstrand NP2000 propellers. This modification is similar to the (now standard) US Navy’s E-2C Hawkeye and C-2A Greyhound modifications.

The Hamiltons give the C-130H less vibrations and they decrease the noise level. On top of that, in combination with Rolls-Royce T-56 turboprop engines, they give the workhorse increased thrust at equivalent engine torque settings, combined with a decrease in the fuel consumption.

The NP2000s have an Electronic Propeller Control System (EPCS) which makes the props more responsive when the crew use their throttles.

In 2018, a prototype of the C-130H NP2000 (serial 92-1536) started a two-year operational evaluation with the Wyoming Air National Guard's 153rd Airlift Wing. Eventually, some 130 Hercules' will be modified. It is not known if, eventually, all aircraft will be modified with the new Rolls Royce engines.