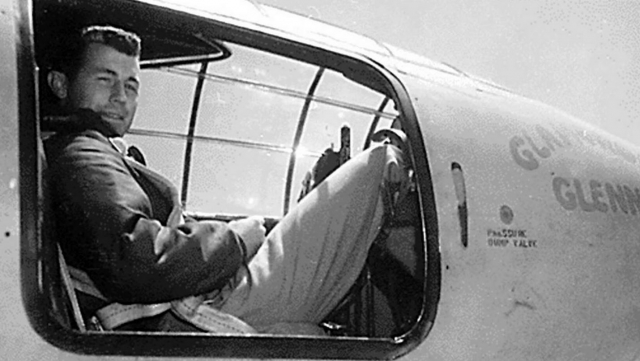 General Chuck Yeager, the most famous test pilot of his generation and the first one to break the sound barrier, died at a hospital in Los Angeles on 7 December 2020. Chuck was 97.

Chuck Yeager (born 13 Februay 1923), with only a high school education, became an enlisted in the US Army Air Forces and started a career as an airplane mechanic.  On a certain day he took a ride with a maintenance officer flight-testing a plane he had serviced. Chuck said then: “I was in maintenance, saw pilots had beautiful girls on their arms, didn’t have dirty hands, so I applied to a flight programme for enlisted men in July 1942." He received his pilot wings on the Beech AT-11, became a flight officer in March 1943 at the P-39 Aircobra and was commissioned as a 2nd Lieutenant after arriving in England (with the 357th Fighter Group at Leiston airfield) for training with the P-51 Mustang. He became a fighter ace in World War II, shooting down five German planes in a single day and thirteen over all. Chuck himself was shot down in his P-51 during a fight with three Luftwaffe Focke-Wulf Fw190s over France in March 1944. Yeager managed to parachute to safety and was able to return with support of the French underground via Spain to the UK. On 12 October 1944, leading three fighter squadrons escorting bombers over Bremen (Germany), he downed five German planes, becoming an ace in a day. In November, he shot down another four planes in one day. After the war, Yeager was assigned to Muroc Army Air Base (now Edwards AFB, CA).

In the decades that followed, he possessed a natural coordination and aptitude for understanding an airplane’s mechanical system along with coolness under pressure. He flew and tested military jets and supported spaceflight. He flew more than 150 military aircraft, logging more than 10,000 hours in the air.

His most important achievement came on 14 October 1947 when he climbed (with broken ribs) into a Bell X-1 attached to the bomb bay of a B-29 over California’s Mojave Desert. Earlier that day, the mothership B-29 started its mission from Muroc and brought the orange, bullet-shaped and rocket-powered experimental X-1 "Glamourous Glennis" up to 23,000 feet. After the X-1 was dropped, Chuck zoomed his "Glamourous Glennis" to 43,000 feet and above the desert, and history’s first sonic boom reverberated across the floor of the dry lake beds. The event marked the same historic level as the Wright brothers’ first flight in 1903 and Charles Lindbergh’s solo fight to Paris in 1927.

Many people will know the name also by the fantastic movie "The Right Stuff" (1979) in which Sam Sheppard played Chuck, but he acted himself as a bar keeper in his favorite Pancho Barnes bar. People who love this story, must also read "Yeager" (1985) and "Yeager, press on" (1988). All three, the movie and books, are necessary food for aviation enthusiasts. The first pocket contained the famous passage: “There should’ve been a bump in the road, something to let you know that you had just punched a nice, clean hole through the sonic barrier. The Ughknown was a poke through Jell-O. Later on, I realized that this mission had to end in a letdown because the real barrier wasn’t in the sky but in our knowledge and experience of supersonic flight.” But if you enjoy fighter pilot stories, you must read it too, as Chuck brings you with his words in its very interesting life, from flying Dakotas, fishing Golden Trouts to presenting boring briefings.

In the fall of 1953, he was secretively dispatched to Okinawa to test a Russian MiG-15 of the North Korean air force  that was defected into US hands. Yeager analyzed the strengths and weaknesses of the tiny fighter, that eventually lead to better US developed fighter planes.

Yeager flew 127 missions during the Vietnam War, mainly piloting Martin B-57s that attacked enemy troops and their supplies along the Ho Chi Minh Trail.
After serving as head of aerospace safety for the US Air Force, he retired as a brigadier general in 1975. Since then, at Edwards air show, he was often invited as a back-seater to break the sound barrier during the opening of the show.

“If there is such a thing as the right stuff in piloting, then it is experience. The secret to my success was that somehow I always managed to live to fly another day.” It may not have accorded with his image, but as he told it: “I was always afraid of dying. Always.” 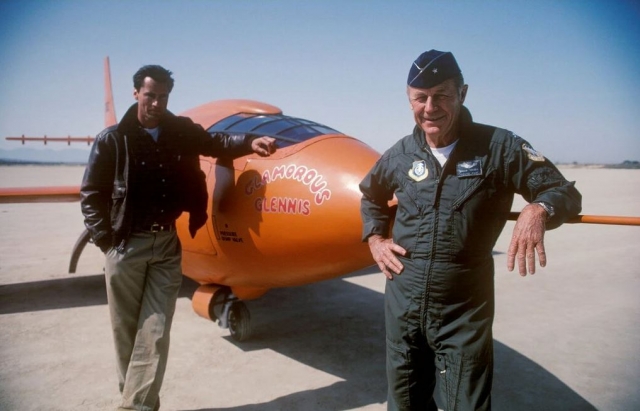 Chuck and Sam in the Right Stuff