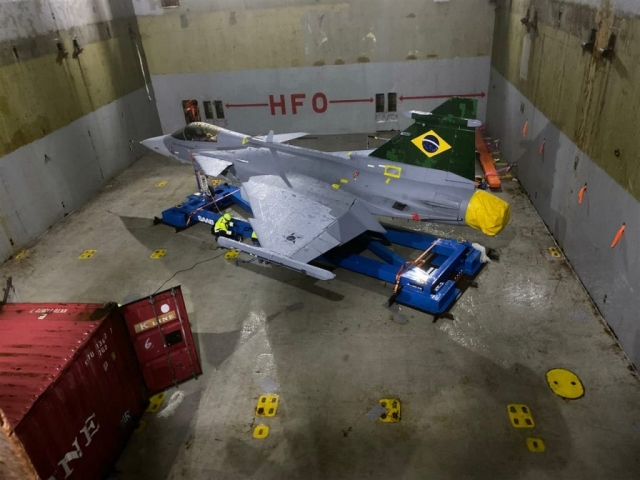 The first Força Aérea Brasileira (FAB, Brazilian Air Force) Saab F-39E Gripen, serial 4100, is on its way to Brazil. The fighter aircraft is on board the merchant vessel Elke, which will arrive in the port town Itajaí (Santa Catarina, Brazil) on 20 September 2020.

The aircraft was loaded on board the merchant Vessel in Norrkoping (Sweden) late August and the vessel departed on 29 Augustus 2020. Just a week earlier, on 20 August 2020, the Gripen flew for the first time with Major Aviator Cristiano de Oliveira Peres, test pilot at the Brazilian Air Force, at the controls. Major Cristiano de Oliveira Peres flew the aircraft over the Baltic Sea for 49 minutes. Since January 2020, he has been located at Saab in Linköping (Sweden), where he has gone through various tests and flown both Gripen and in the simulators.

This first fighter aircraft will not yet be delivered to the Brazilian Air Force. The Gripen, an FTI (Flight Test Instrumentation) aircraft, will be taken to Embraer’s headquarters in Gavião Peixoto where the flight test programme will continue. Despite this, the aircraft will make a special presentation in the capital of Brazil on Aviator Day, on 23 October 2020.

According to the FAB schedule, the first operational Gripen will be delivered in 2021. The Brazilian Air Force decided to designate it as F-39E Gripen and the two-seater model as F-39F. Brazil ordered 36 aircraft, 28 of which are single-seater and eight two-seater models. The 1st Air Defense Group (1st GDA), based in Anápolis will be the first Brazilian squadron to fly with the new fighter jet.