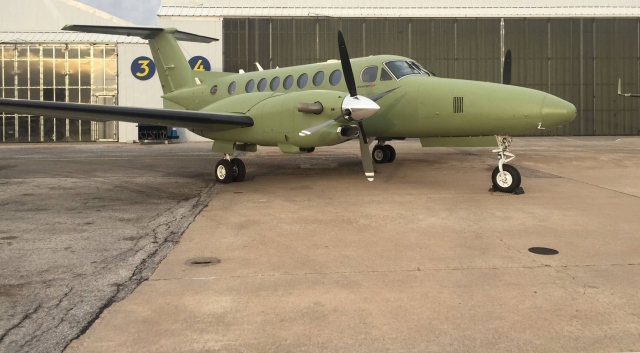 The King Airs were ordered through the US Foreign Military Sales (FMS) programme.

According to the Department of National Defence (DND), the US Government was “identified as the only source of supply capable of providing the fully-integrated solution. The Beech 350ER will help to enhance the ability of the special operations to improve their understanding of the operational environment.

The aircraft will be configured with military grade advanced sensors, and secure communications equipment. MAISR will have the capacity to be deployed on short notice and will provide the armed forces with better situational awareness on the ground and thus positively affect the ability of commanders to make decisions leading to mission success.”

The agreement with the US Government was finalized in April 2019 and has a total value of CAD 247 million (USD 187 million). In December 2019, Textron Aviation (USA) was awarded a USD 37,2 million FMS contract to supply three Beechcraft King Air 350ER aircraft.

In November 2020, the DND awarded L3Harris Technologies a firm-fixed price contract of an undisclosed amount to modify three King Air 350ERs into intelligence, surveillance and reconnaissance aircraft for the country’s special operations forces. At least two aircraft are currently with L3 Harris in the USA for integration work and painting. Delivery of the MAISR to Canada is scheduled for mid-2022.

We are not aware yet of the identities of the three aircraft. if you have updates on the ids, please send them to This email address is being protected from spambots. You need JavaScript enabled to view it.