Canberras auctioned in the USA

Two English Electric Canberras B6, registrations N30UP and N40UP, have been sold in an auction on 3 November 2020.

The first of these aircraft, N30UP, which was flown as Royal Air Force serial WT327 during its days in British service, has been bought by an, until now, unknown aviation museum in the UK. Although the FAA register indicates that N30UP has construction number 6663, this is only true for the nose section of the aircraft. This part was transplanted from Canberra WK163. N30UP is in fact c/n 71417.

The second machine, N40UP (construction number 71398), has been acquired by a private American, who has the intention of returning it to flight. This Canberra was built in 1954 and flew in British service as XH567.

Both aircraft were built as Canberra B(I) Mk8, but later modified as B Mk6 research platforms. WT327 was initially used as a trials aircraft by the Royal Aircraft Establishment, Pershore. From 1990 to 1995 both Canberras were used by the Defence Research Establishment, RAF Bedford (UK). After their service there, they were sold to the USA in 1997.

Having received British civil registrations, G-BXOD (for XH567) and G-BXMO (for WT327), both aircraft were overhauled by Delta Jets at Kemble before their ferry flight to the USA. From 1998 to 2005, N30UP and N40UP were owned by Air Power Inc, Lakeport (CA).

Since September 2005 both aircraft were used by High Altitude Mapping Missions Inc. of Spokane (WA) USA. The exterior of N30UP and N40UP still reminds of their days at the Defence Research Establishment (DRE); both carry the “raspberry ripple” red, white and blue colours of the DRE. 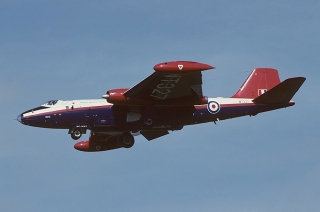 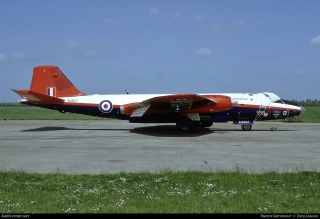