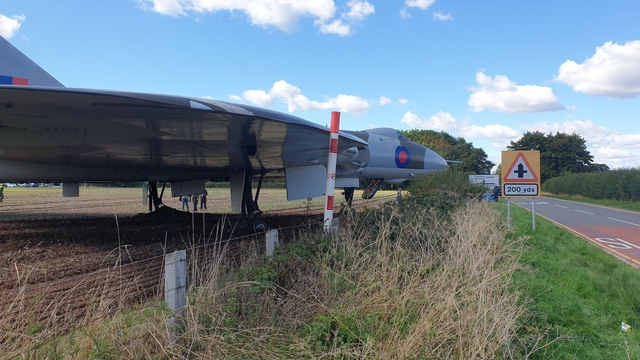 On 16 September 2022 a fast taxirun of AVRO Vulcan XM655 at Wellesbourne-Mountford airfield (UK) ended in an unexpected way. While doing a practice run in preparation for the public day of the coming Sunday, the Vulcan crew was unable to bring the V-bomber to a timely stand-still.

As a result the large Delta continued its course, crossing the runway threshold until it reached the perimeter fence.

The photos show that the main undercarriage legs are deep in real British mud. Local media have reported that the crewmembers of the Vulcan have not been injured.

The Vulcan is owned by the XM655 Maintenance and Preservation Society and kept in an non-airworthy taxiable condition. 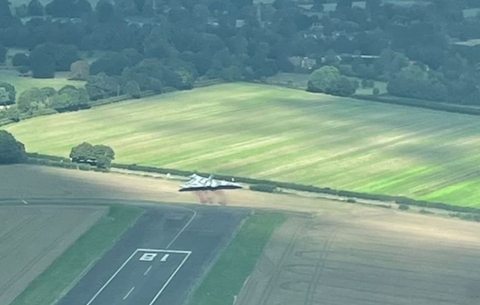 Soon after the accident the Society came with an official statement, which Scramble quotes: “After satisfactorily completing low speed steering and braking tests on runway 05/23, the aircraft was taken onto runway 18/36 for a trial high speed run. Due to a malfunction of a piece of equipment in the cockpit, the aircraft remained at full power for approximately two seconds longer than intended. This resulted in excessive speed and less distance in which to stop, and the aircraft passed beyond the end of the runway on to the agricultural area, stopping just before the airfield perimeter. The failed equipment was an air speed indicator which had been tested and found satisfactory six days ago, and which started working normally before the end of the run. The aircraft brakes worked properly but were unable to bring things to a halt within the reduced space available.”

Scramble wishes the XM655 Maintenance and Preservation Society all the best in recovering the mighty Vulcan and returning it to its previous condition.