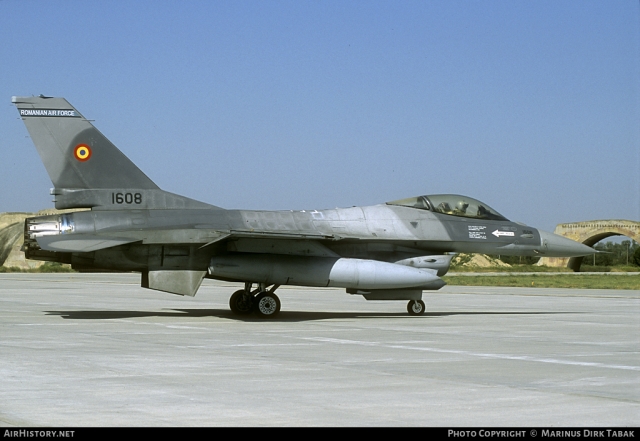 On Tuesday 13 July Fortele Aeriene ale Romanei (FAR, Romanian Air Force) F-16AM, serial 1608, from Escadrilla 53 took off from Baza 86 Aeriana, Fetesti – Borcea for a training mission in the area of the Malina range. During this training mission the pilot declared an emergency, interrupted the mission and returned to it’s home base. According to the official statement from the air force there was an accident during an air-ground shooting exercise.

“On Tuesday July 13, the pilot of an F-16 Fighting Falcon aircraft equipped by the 53rd Romanian Air Force Fighter Aviation Squadron reported a flight incident that occurred during the execution of air-ground combat training in the area of the Malina range, jud. Galati.

We mention that the incident did not endanger the life of the pilot or other people, nor the integrity of the aircraft or other properties and goods on the ground. From the first information reported by the pilot, at the time of launching a training bomb there was an uncontrolled detachment of an external fuel tank and the triple hook beam on the right side of the aircraft, materials that fell in the area intended for air-ground fire from a polygon.

According to standard procedures in these situations, the pilot of the aircraft reported the emergency and landed safely at the airbase.

A commission appointed by the Chief of Staff of the air force is analyzing the causes of the event”.