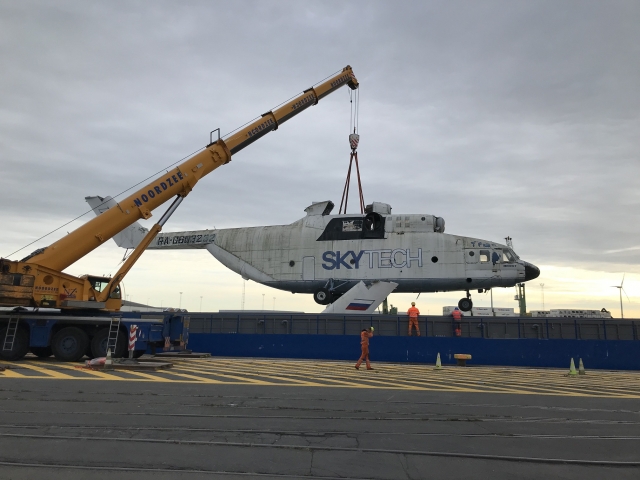 Belgian Mi-26s on the move

After a long period of storage at the Krakeleweg in the harbor of Zeebrugge (Belgium), three giant Mil Mi-26T helicopters were shipped to Antwerp.

The trio was once owned by the Belgium helicopter firm Skytech, which was founded in 1989. Skytech operated several types of Soviet built helicopters including Kamov Ka-32s and a Mil Mi-10. These were used for specialized transport and firefighting duties.

In 2000 the three Mi-26s were used as firefighters (able to deliver 20.000 litres per drop!) by the Italian Corpo Forestale. 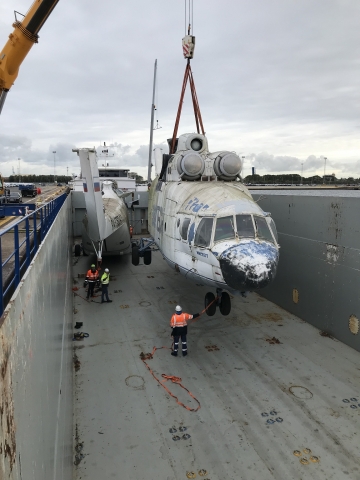 In the years that followed, the stricter rules of the joint European aviation authorities prevented further use of the Mi-26s within the EU. RA-06032 and RA-06041 were stored at Charleroi-Brussels South airport, while fellow RA-06021 remained at Liege airport.

By that time the three helicopters were bought by a Dutchman, who had plans to export the lot to Africa. Unfortunately his plans did not succeed and the big Mi-26s were trucked to Zeebrugge. The trio was stored there at a remote location and being difficult to spot, they were even considered to have returned to Russia. But this obviously was not true.

What will happen now? We really do not know, but the fact is that even ONE Mi-26 is too big for the nearest aviation museum, Antwerp’s Stampe & Vertongen museum. We will have to wait and see!