Klamath Falls Airport, also known as Kingsley Field, is a joint civil-military public airport located four miles (6 km) southeast of Klamath Falls, in Klamath County, Oregon, USA. The airport has two runways. It is mostly used for military and general aviation, but also has limited commercial service. As Kingsley Field Air National Guard Base, the airport serves as the home of the Oregon Air National Guard's 173d Fighter Wing flying the F-15 Eagle. An Air Education and Training Command gained unit, the 173 FW specializes as an advanced air-to-air combat training center for Regular Air Force and Air National Guard F-15 pilots, as well as hosting joint and combined air combat exercises for all US military services and those of Canada. In 1928 the citizens of Klamath Falls approved the sale of $50,000 worth of bonds to construct an airport. The airport was known as the Klamath Falls Municipal Airport and consisted of gravel runways and one Fixed Base Operator. In 1942, the airport was selected as a site for a Naval Air Station subsequently named NAS Klamath Falls. In 1945, the airport transferred back to civilian use. In 1954, the airport was selected as a site for U.S. Air Force installation under a joint civil-military arrangement supporting Air Defense Command, later Aerospace Defense Command (ADC) aircraft and squadrons. In 1957, the airport was dedicated as Kingsley Field in honor of 2nd Lieutenant David R. Kingsley, USAAF, an Oregonian killed in action on June 23, 1944 after a B-17 bombing mission over the oil fields of Ploesti, Rumania. In 1976, ADC was inactivated and control of the military installation passed to Tactical Air Command. In 1978, the Department of Defense chose to close Kingsley Field as a regular Air Force installation, transferring all military facilities to the Air National Guard. (Source: Wikipedia)

The airport's main runway is north-south orientated. On the west side, the civil terminal, FBO's and the main military apron are located while in the northeast there is another military apron with some hangars. Runway 14 is preferential runway and will be mostly used due to the location of the cities. Expect a righthand pattern for landing aircraft.

Around The Airport
1
North side approach, afternoon

This is a good spot for the afternoon with southerly winds. Take the exit onto Route 140 Southside Expresway. Take a right onto Altamont Drive and drive towards the airport. Directly at your right, there is a parking with facilities. Park your car here. Depending on your preferences, walk along the Perimeter Road to a good location for some landing shots. Runway 14 is preferential runway.

From Midland Highway, take a left onto County Highway 803 towards the airport. After the railroad, take a right onto Airport Drive and Dyess Road towards a large parking. From here you will have a view onto the aprons. South of this parking the military facilities are located. North of the parking the civilian facilities are located. Have a look into Stinson Way and County Highway 803 towards the fence to note down all civilian aircraft.

From Midland Highway, take a left onto County Highway 803 towards the airport. Take the first right, before the railroad onto County Highway 876. Drive along the railroad and airport fence to the beginning of the runway. Along the way you will have a view onto the preserved aircraft at the military base. However, parking is difficult here and this small runway is only used for agricultural aircraft.

From Midland Highway, take a left onto County Highway 803 towards the airport. Take the first right, before the railroad onto County Highway 876. Follow it until you pass two canals. You can take the dirt road after passing the second canal, cross the railroad to arrive on a hardened road again to the beginning of the runway. Park your car along the road and position yourself depending on the position of the sun and your hardware. Alternatively, if you don't travel by rental car, continue on County Highway 876, take a first left onto Old Midland Road and then first right again onto Homedale Road. Before the canal, take a left to arrive at the approach lights again.

If you are into agricultural aircraft, you have to visit this spot to spot them all parked here. From the Midland Highway, from the city centers take the exit onto Route 140 Southside Expresway. Take a right onto Homedale Road and drive towards the beginning of the runway.

From the Midland Highway, from the city centers take the exit onto Route 140 Southside Expresway. Take a right onto Summers Lane towards the fence and a parking with facilities. Park your car and walk along the Perimeter Road to your favourite spot. Runway 14 is preferential runway.

From spot 2, you can also move to this spot which is located closer to the taxitrack. Go north again on Altamont Drive and take a right on Stinson Way. at the end is an abandoned octagonal building which, when entered, gives a good view onto the aprons and taxiways. Photography is best in the afternoon. 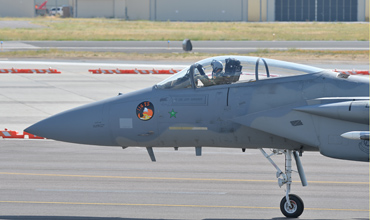 Photographer Lieuwe Hofstra shows the nice photographic possibilities at spot 7 by this shot. 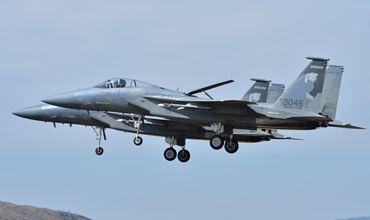 A shot by Lieuwe Hofstra, standing on spot 6, of some local Eagles ready to land.
Frequencies
Based
Preserved
More Info
Links
Other Airfields
Send Updates!