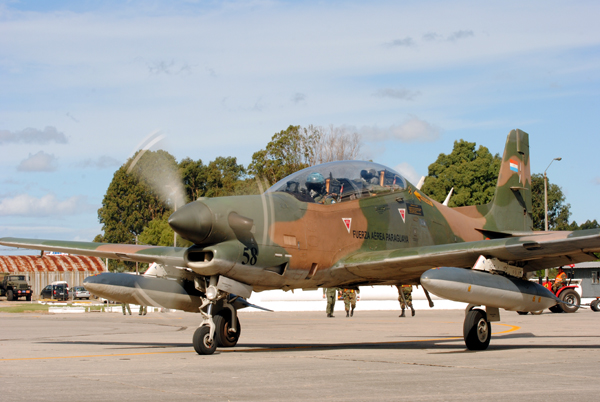 Paraguay has been operating the EMB312 Tucano since 1987. Late 2010, the three survivors of the original six, were augmented by three former Brazilian Air Force examples. One of those, 1058, is seen here visiting neighbouring Uruguay at their 100th anniversary airshow.

Although definitely not a last generation aircraft, this Neiva T-25 Universal is one of the latest acquisitions of the FAP. Six of these rugged trainers were donated in a friendly gesture by neighbouring Brazil and delivered in December 2005.

Sun bleached AT-26s can still be found stored at Silvio Pettirossi; the type is withdrawn with no successor.

Chilean built T-35 Pilláns replaced the T-6, T-23 and T-25 in FAP service. They are known by their official designation ECH-51A and B.