Brief history
In the early 20th century when Japan annexed the peninsula. The Japanese, who hung on until the end of WWII, were harsh masters, and anti-Japanese sentiment is still strong in North Korea. After the war, the USA occupied the south of the Korean peninsula, while the USSR took over the north. Stalin sent Kim II-sung (the 'Great Leader'), a young Korean officer from a specially trained unit of the Red Army, to take charge of communising the North. When the South declared its independence, the North invaded. The ensuing war lasted until 1953.

By the time the war ended, two million people had died and the North was virtually flattened after almost continual bombing by the US Air Force. The North Korean economy developed more rapidly than the South in the early years, thanks to the new Juche (self-reliance) ideology that Kim created and installed. North Korea developed heavy industry on the foundations the Japanese had laid, and made leaps ahead in the social arena, and North Koreans were offered some of their first schools, clinics, food reserves, labour rights and recreation facilities they had ever had. Life improved markedly if you weren't a class enemy.

North Korea still limits trade and transportation links with other countries and tightly restricts the circumstances under which foreigners may enter the country and interact with local citizens. Still, starting 2012 never before so many Aviation Enthusiasts have had the opportunity to visit this still very closed country! 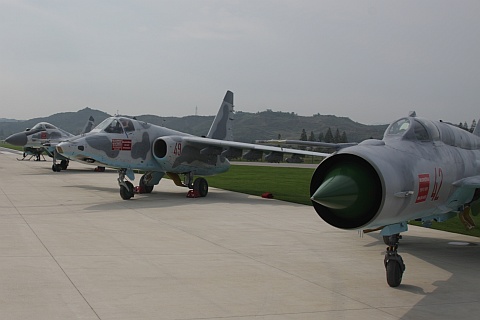 KPA Air and Anti-Aircraft Force
The Air Force also known as Democratic Peoples's Republic of Korea Air Force (DPRK AF) became a separate entity in 1948. Its primary mission is air defense of the homeland. Secondary missions also include tactical air support to the army and navy that don't have any air elements of there own. Theoretically the Air Force operates a very large number of aircraft. Many of these however have come to age and only two types (MiG-29 and Su-25) can be considered current generation being delivered in 1988. Many older generation aircraft were also delivered by the Soviet Union (MiG-21PF/PFM and MiG-23ML) or by China (H-5, F-5, F-6 and F-7 that also supplied the helicopters. In 1999 North Korean attempts to order 40 MiG-21bis from Kazakhstan finally seemed successful, although after the delivery of 30 aircraft the United States was successful in stopping further deliveries.

Given the relatively small size of the country the Air Force can use many a great number of airfields and strips with 26 dispersal fields and 18 highway strips adding to the 25 operational bases. In 1990-91 North Korea activated four new bases near the Demilitarized Zone with South Korea. In October 1995 over 420 fighters, bombers, transport planes and helicopters were redeployed which included over 100 aircraft (80 MiG-17s and 20 H-5) to three of those fields.

Organization
The current Air Force organization was established in the mid to late 80's. The Air Forces' Headquarters are in P'yongyang. It controls directly several special Regiments like the EW Regiment, a test & evaluation Regiment and a naval support and ASW Regiment. The Kim Ch'ack Air Force Acadamy is located at Chongjin. Air Combat and Transport Regiments are controlled by six Divisions that report to headquarters.

North Korea has some aircraft maintenance facilities. The Mi-2 was license build in the country and in 1993 two MiG-29s were assembled at the Panghyn plant from Russian kits. Although some sources say about 10 kits were supplied it is believed that production had to be halted halfway because of inability to pay for more.

The only area where aircraft acquisition proved successful was at Air Koryo, that obtained one An-148 replacing the Tu-134A.

Maintenance is carried out in "Aircraft Production Centers" located at P'yonghyon, Kusong, Tokhyon and Chongjin.