NVA Nationale Volksarmee
LSK/LV Luftstreitkräfte/Luftverteidigung
On 1 March 1956 the air force was officially established as part of the National People's Army, following the GDR's entry into the Warsaw Pact alliance. Initially the air force (LSK), with its headquarters at Cottbus, was separate from the Luftverteidigung (Air Defence, headquartered at Strausberg (Eggersdorf). It was intended to establish three fighter divisions, an attack aircraft division and an anti-aircraft division. However, eventually only the 1st and 3rd Aviation Divisions and the 1st Flak-Division were created. On 1 June 1957 there was a merger of the two administrations in Strausberg (Eggersdorf), and the new headquarters was renamed the Kommando LSK/LV.

Starting in 1953, East Germany received An-2, La-9, Yak-11, and Yak-18 aircraft and the MiG-15 in 1956 which were provided by the Soviet Union. The first MiG-21s were delivered in 1962. The 1970s saw the introduction of the MiG-23, while Su-22 fighter-bombers were delivered in the 1980s. The latest addition was the MiG-29 in 1988. The inventory also included Soviet-built helicopters along with trainers and other light aircraft manufactured in Czechoslovakia. The East German Air Force was unique among Warsaw Pact countries in that it was often equipped with the most advanced Soviet fighters, instead of downgraded export models. As an extension of the Soviet 16th Air Army deployed in East Germany, the Luftstreitkräfte was expected to play a front-line role in any war with NATO. As a result, it was under closer Soviet control than the air forces of other Warsaw Pact states. After German reunification in 1990, the Luftwaffe assumed control over Luftstreitkräfte equipment and enlisted some of its personnel. Many of the GDR's military aircraft were obsolete or incompatible with NATO technical standards, and were sold to other countries. However, the Luftwaffe did retain the MiG-29 in both air defense and aggressor roles because of its excellent capabilities.

Landstreitkräfte
The Land Forces of the National People's Army (German: Landstreitkräfte der Nationalen Volksarmee - LaSK), was the ground based military branch of the German Democratic Republic (GDR) National People's Army (NPA). The Land Forces Command, located at Geltow was established on 1 December 1972 as a management body created for the land forces. The NPA itself was created on March 1, 1956 from the Kasernierte Volkspolizei (Barracked People's Police). The LaSK had a peacetime organisation since 1972 under the command of the Kommando Landstreitkraefte (Kdo. LaSK). Its largest formations between 1956 and 1990 were the Military Districts III and V, which generally consisted of three active divisions each, plus training-, combat support and logistic units.

Both Kampfhubschraubergeschwader initially belonged to the LSK, but on 30 November 1984 they became part of the Kommando LaSK.

Volksmarine
On 1 March 1956, the GDR formally created its Nationale Volksarmee (NVA) (National People's Army), and the VP–See became the Verwaltung Seestreitkräfte der NVA (Maritime Forces Administration of the NVA) with about 10,000 men. In November 1960, these maritime forces of the National People's Army were officially designated Volksmarine (People's Navy). Over the next years the navy gradually received a number of new ships, mostly built in the GDR. Only the coastal protection ships and some of the fast torpedo boats were provided by the Soviet Union, as were all helicopters, and some auxiliary craft were purchased from Poland.

The flying unit of the VM was also initially part of the LSK, but on 15 September 1962 became part of the Kommando Volksmarine.

The People's Navy was dissolved, like all other branches of the former National People's Army, on 2 October 1990 – the day before the official reunification of Germany. Some of its staff was assumed into the Bundesmarine (which was henceforth called Deutsche Marine), some by the German Border Police. Most of the ships and other equipment were scrapped or sold, and few if any former People's Navy vessels remain in service with the modern-day German Navy.

Grenztruppen
The Border Troops of the German Democratic Republic, in German Grenztruppen der DDR, were a military force of the GDR and the primary force guarding the Berlin Wall and the border between East and West Germany. The Border Troops numbered at their peak approximately 47,000 troops. 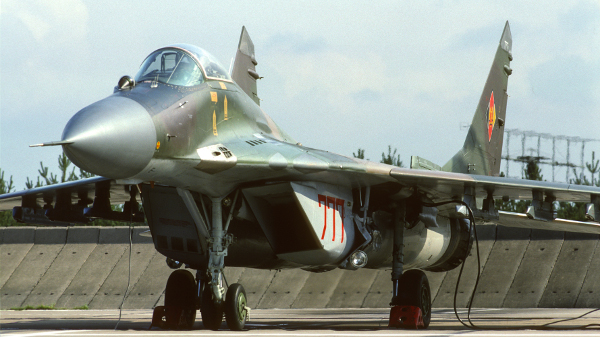