In the Soviet era one of the four main airports serving Moscow, Domodedovo was the main airport for domestic flights to the other republics within the empire. But in recent years the airport -now part of the East Line Group- has become more and more popular with foreign (western) airlines, moving their operation from Sheremetyevo to Domodedovo, mainly because of the better facilities and connections to the city. To cope with all this extra traffic, the terminal has completely been rebuild and expanded.

Domodedovo also used to be a main cargo hub, attracting large numbers of IL-76s and An-12s, but due to recent changes in customs regulations this has dropped considerably.

The major part of airlines from the former Soviet Union are now also rapidly exchanging their Ilyushins, Tupolevs and Yakovlevs for Airbuses and Boeings, leaving only a small percentage of the former to be seen here compared with recent years.

Despite this, Domodedovo probably is still good for good numbers of Soviet era airliners, in the Moscow area probably only surpassed by Vnukovo, although a large portion is stored nowadays.

The East Line group, of which the airport is a part, also has its own security service, who also are responsible for the perimeter security. They are notoriously known for not being very spotters friendly and easy with confiscating photo equipment.

Domodedovo is well connected to Moscow city with a branch of the M4 motorway leading directly to the airport. The exit on the Moscow Ring (MKAD) is well signposted.

Domodedovo airport can be reached using a high-speed nonstop railway, the Aeroexpress, or standard commuter train, both of which departs from Moscow-Paveletskiy railway station. The railway station at Domodedovo is located next to the terminal building.
Also several Express Buses connect Domodedovo with Domodedovskaya metro station and Sheremetyevo airport.

The waiting lounge on the top floor, which is freely accessible, has large windows giving a nice overview of the platform between the two main piers, and a partly obstructed view of the forecourt. But also here East Line recently has been tightening security, and photographing has now been banned from within the terminal.
The view from the trainstation -on some of the western platforms- has now completely been obscured by recent extensions of the terminal.

The main short term parking lies adjacent to the easterly platforms. From here you have a nice overview of almost everything happening on those platforms and all aircraft taking off or landing on 14L/32R. From the far corner also most aircraft on the Avial NV platforms (mostly An-12s) can be noted. Latest news is though the new terminal partially obscures the view to the platforms, and East Line security has been warning spotters it is no longer allowed to stay here.

Leaving the terminal, turn left before the Tu-114. As soon as you cross beneath the railroad you enter the cargo area. When you walk or drive behind the warehouses, it gives several opportunities to read aircraft standing on the cargo platforms, but photography is nearly impossible. Note though that East Line security is usually not that fond of enthusiasts wandering around in this area.

Nice spot for aircraft landing on runway 14L or taking of from runway 32R. To get here you need to walk from the road leading to Selvachevo.

On the east side of runway 14L/32R several spots around the dacha park can be found to take pictures of aircraft using this runway. In general they can not be reached by car, so you need to walk here from spot number 4 (about an 1 hour walk). As might be expected you are facing the sun from around noon here though.

Near the treshold of runway 14R. Great spot for aircraft using this runway. To get here is about a 15 minute walk from the road leading to Yelgazino.

Also along runway 14R/32L, about halfway, several spots can be found for a limited overview of the cargo platforms, but none is very good for photography due to the height of the concrete walls and the trees inside the perimeter in this section. None of those spots can be reached by car, so even more then for spot number 5 some walking has to be done.

Continuing parallel to the runway, you finally reach the threshold of runway 32L. But this takes up to one hour and a half to two hours from spot 6 in which you have to cross meadows, dense forests and ditches. A small mount can be found here which is sufficient for getting higher then the walls. 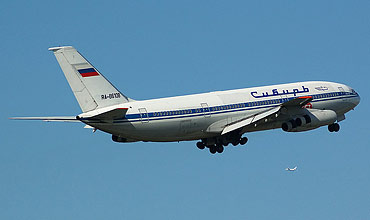 At spot 5, some nice shots can be made. (Andrei Pechenkin) 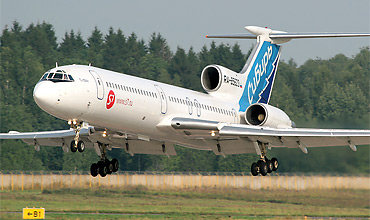