The international airport of Santiago handles all intercontinental traffic. Also, the Fuerza Aerea de Chile has a large presence with two Grupos belonging to the second air brigade being based here. Obviously, LAN Chile is omnipresent but also some other carriers, most of their first generation B737s are stored here as well. Lastly, the civil aviation authority (DGAC) keeps its fleet here.

Spotting is not frowned upon in Chile; on the contrary, it can be done relatively open and free. There is a local spotting community too and they are usually well informed.

The airport has two parallel North-South runways. These are connected by two taxi tracks, the Southern one runs past the terminal. Between the taxi tracks, adjacent to the tower, there is some further ramp space lined with small hangars, the DGAC hangar and ramp is there too. North of the second connecting taxi track, the FACh area can be found. This is an L-shaped ramp, most of which is used during the bi-annual FIDAE aviation trade show, the largest of its kind in South-America.

The airport is well signposted from Santiago's excellent highway system. Entry to the airport is free, but leaving the terrain you will have to pay a flat fee. Early 2010 this was about 1/2 euro, so not exactly a show stopper. For the eastern spots, it is easier to use an earlier exit, refer to spot 4.

There are plans, and some work is already under way, to connect the perimeter road to the main road, in the north east corner of the airfield.

The international terminal has suffered from the February 2010 earthquake, but after checking in it offers brilliant views. You can also take pictures through the glass.

Although 35R/L sees little use, both approaches can be reached. The threshold of 35R can be viewed from the west as well as the east. For (late)afternoon shots you have to enter the airport and make a right at the first opportunity. This leads to a parking lot with easy viewing of 35R and the southernmost part of the eastern ramp.

3South east side approach 35R - AM

You can pick your spot anywhere along then airport fence line when 35R is in use, or 17L for that matter. Be sure to park your car well off the road, the shoulder provides this space every now and then.

4North east side threshold 17L - AM

Easiest way to get here is to take exit 13, Lo Boza, from the Americo Vespuccio Norte Express highway that connects Santiago city with the airport. Follow this road until there is a sharp left hand upward connector to another road, the airport perimeter is visible here. Make a left and you are at the threshold, higher than the fence.
However, for a slightly better spot, drive south along the fence, following the peculiar bulge in the airport terrain. Where the road bends left again, there is ample space in the corner of the fence to park. You can pick a spot to photograph over the fence, walk a bit up and down to avoid airfield infrastructure, e.g. red-and-white poles.

5North east side approach 17L - AM

When the sun turns against you, through the north, then you will have to move along the Lo Boza road. After the landing lights there are some places to park the car off the road, albeit just. There is a piece of barren land north east of the road, from here good landing shots can be made. However, they tend to switch between 17L and 17R so if the locals jump in their car heading for spot 7, you'd better follow them…

Runway 17R/35L is just as good, or maybe even better, than 17L/35R. Simply follow the road along the airfield perimeter. Park your car just east of the approach for morning light. Obviously, spot 6 has a 'shadow' on the perimeter road on the airfield itself, on the other side of the divider. See under spot 9 how to enter this airport road.

7North west side approach 17R - AM

This is slightly further down this road, around the bend. There is ample space to stand and watch and photograph the approach of 17R here. For afternoon alternate use of 17L, see spot 5, your short dash ends here.

Halfway down the runway, opposite the taxi-track connecting both, there is a higher embankment. The outside road used to be connected to the airport road here, but alas this is no longer the case. You can park you car outside the airfield and simply step over the fence or concrete divider. According to the locals the best spot is just south of here, if you stand on the wall of a small bridge, you will not have the fence to cope with in the bottom of your pictures. Obviously, this spot can also be reached by taking the airport road, parking the car on the other side of the closed off gate.

For the 35L approach in the afternoon you will have to take the airport road. For this, access the airport and take the first U-turn possibility, just south of the Shell petrol station. Stay right and make a right. You will now under pass the western approach. Immediately after that, there is a large patch of gravel to park your car and follow the proceedings on runway 35L after midday.

Maybe the only slightly difficult runway is 35L during the morning. Best bet is to leave the car at spot 9 and walk along the busy perimeter road back under passing the approach of 35L, as it is difficult to park your car alongside it.

Alternatively for 35L, you could try to spot from the area south of the terminal parking, there is a road forking off to some airport installations. Easiest option is to park your car at the Shell petrol station and walk towards the fence. To reach this spot, you have to go around, either past the terminal or taking the third U-turn option.

You can actually follow the airport road all the way around the threshold of 17R, to the 'inside ' of the northern half of the 'H'-shape. You will pass the gate to the Chilean Air Force base and after that you will underpass the taxi track. From here views of the storage ramp can be had, you can also drive on which takes you opposite the terminal near the tower. From here, a walk to the fence will also offer views on 17R/35L. The fence is very high though and parking your car in this airport area will probably not be appreciated. Given the many good other spots, a hit-and-run for some parked aircraft will probably be the best bet. 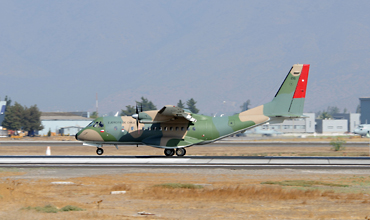 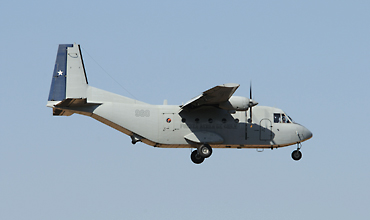