This military airfield is the western-most mainland air base of the Royal Australian Air Force, just north east of Perth. It is therefore not located in the suburbs of Canberra (ACT)... Besides some RAAF training squadrons with PC-9 and Hawks, the base also houses a sizeable Republic of Singapore Air Force enclave with S211 jet trainers.

The base is dominated by two north-south runways. The east side contains the ramps, the RAAF occupies the north east part whereas the RSiAF resides to the south of that. There is also a smaller west-east runway. The north, west and south sides are barren bit covered by bushes and other foliage preventing clear views.

From Perth, simply take the Great Northern Highway northbound. This no.1/95 road runs past the base. Alternatively, from Joondalup take road 86 eastbound which becomes Neaves road.

The south side is the only straightforward place to spot. Simply take Warren Road off the aforementioned Great Northern Highway. This is the second to last asphalt road before you reach the base from the south (the last one leads to an industrial estate). Follow this road, the asphalt ends but the road continues albeit unpaved. The aircraft are still a bit high here. You can see them taxiing to the threshold of runway 36 and watch the southern part of the taxiway as well.

The approach to runways 18L and R used to be do-able from the barren land to the north of the perimeter. Unfortunately, this has been fenced off and is now military terrain. So the only viable option on the north side is to find a spot east of the Great Northern Highway, which is a no-stop road itself. There are some tracks to the east of this road and north of the village. The distance will be considerable though since you will be under the approach of runway 23 rather than 18!

From Bullsbrook Road, which is a small street off No.1 Road that ends in a crash gate, you can read up to a dozen PC-9 under their sheds. Obviously, provided they are going to fly and are outside.

Another glimpse of parked aircraft can be catched by taking North Avenue just past the gate and make another right into Truscot Street. From there you can see a small part of the Hawk shed tail on.

These are situated in the centre east side of the airfield and can not be seen from spot 1. The western side is covered by undergrowth, both on base and directly to the west of that. On the east side, the view is obscured by buildings.

The old spot on the north side can not be reached. There is a distant possibility, if you can park your car somewhere, to walk through the scrublands towards the perimeter fence from the north side. You used to be able to see the Hawk sheds from there too. 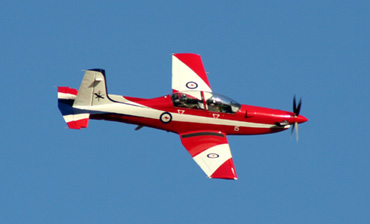