History After the outbreak of Word War I in Europe, Theodor Real was on 31 July 1914 entrusted with the formation of a flying service in Switzerland. The first pilots saw little action during the war, they concentrated on development and training instead. In October 1936, as a result of the policical developments in Europe, the Air Force was declared an official branch of the defence forces, and the Department of Aviation and Anti-Aircraft Defence was created. Switzerland succeeded to be neutral in World War II, but nevertheless they shot down several aircraft of the German Luftwaffe and Allied Forces in aerial combat. With the introduction of the Vampire in 1946, the Air Force took an early and bold step into the jet age. Stucked between NATO and Warsaw Pact during the Cold War, very soon a decision was made to invest in the building of the Swiss unique caverns for aircraft. In 1964 the procurement of the Mirage fighter caused a scandal due to the severe budget overrun involved. Time and again the Swiss Air Force has found itself at the mercy of the politicians.

No other branch of the armed forces stirs up such strong feelings as the Air Force. The most recent example of this is the 1993 referendum aimed at preventing the procurement of 34 F/A-18's. However, the Swiss voted in favour of their Air Force. As with every Air Force in Europe, the size of the Schweizer Luftwaffe has been cut dramatically from 300+ aircraft till the present status. Hawks and Mirages are already withdrawn and the first F-5Es are sold to the US Navy or leased to Austria. Whats left is a small but sufficient Air Force.

The current chain of command appears to look like the following:

Over the past years Switzerland relied heavily on militia (Miliz) troops. Most of the pilots did so besides their normal job. In order to get the skills needed for a decent defence pilots had to follow a yearly refresher course (Wiederholungskurs, mostly abbreviated as WK) during which missions were flown from the war time bases. These war time bases usually only open for two or three weeks during these refresher courses.

But as these operations are extremely expensive the practice of using these reserve bases has been abandonned now. Refresher training is being flown from the Payerne, Sion and Meiringen. The latter is the only airbase operating the Kaverne (caverns) for housing the fighter aircraft. The only "traditional" reserve base is Mollis, that is only in use during the refresher training of the Super Puma transport helicopters. In order to know whether there will be any special flying activity by the squadrons it is advised to visit the VBS website. If a date is given for a Fliegerstaffel, than the chances are extremely great the war time base wil be used. 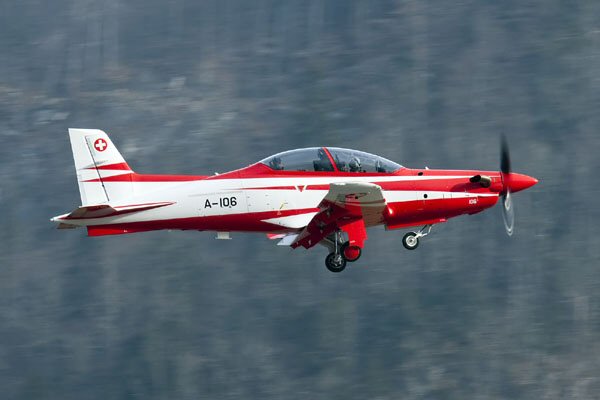