History
The country has a rich and varied history, we could start with the first traces of settlement around 12.000BC, the trading of crops and ceramics, and the subsequent developments that still influence Peruvian culture today. However, the current nation state finds its roots in the Wari and, later, Inca period.

Empire building by conquering and settling were the name of the game in a 2000 year period, roughly running from 600BC to 1526 when Pizarro made his first visit from Spain. After initial explorations he formed an expedition in the 1530s and swept the Inca empire away with relative ease, partly because of internal turmoil. Pizarro founded Lima in 1535 and although several uprisings were to be noted in the decades to follow, the defeat of Tupac Amaru in 1572 meant an end to this turbulent start of Peru. Colonial rule lasted for about two centuries, the suppression of culture and exploiting of the local Indians, finally sparked a first uprising in 1780. When even the colonist became dissatisfied by Spanish rule, the ingredients were present in the early 19th century for the final struggle that would lead to Peruvian independence.

José de San Martín, conqueror of Argentina and Chile, and Simón Bolívar, conqueror of the Andean countries, met in Ecuador. Bolívar went on the liberate Peru and by dealing decisive blows to the Spaniards in 1824, Peru gained its independence. Peru as we know it today was only formed when Chile returned the southern Coastal area, which it had won during the 1879-83 war, and the 1942 Rio de Janeiro treaty marking the Northern border with Ecuador. The latter being disputed again in the eighties and nineties of this century, the conflict now believed being subdued. Either dictatorship or violent uprisings have overshadowed Peruvian post war history. Therefore, the recent period of relative stability is more an exception than rule.

General information
Peru is a vast and curious country. The coastal line primarily consists of desert terrain that is dry and hot. With the nearby sea this produces a lot of low clouds and mist. The mighty Andes mountains form the spine of the country, the alpine climate is much cooler of course. On the eastern slopes of the Andes the Amazon jungle starts, humid and densely vegetated. Noteworthy, apart from the stunning landscapes, are the cultural treasures like the hidden Inca cities in the Andes, Machu Picchu being the most famous of them, the large line drawings on the hill slopes near Nazca and the mixture of Indian and Spanish colonial influences make a visit to Peru an experience in itself. 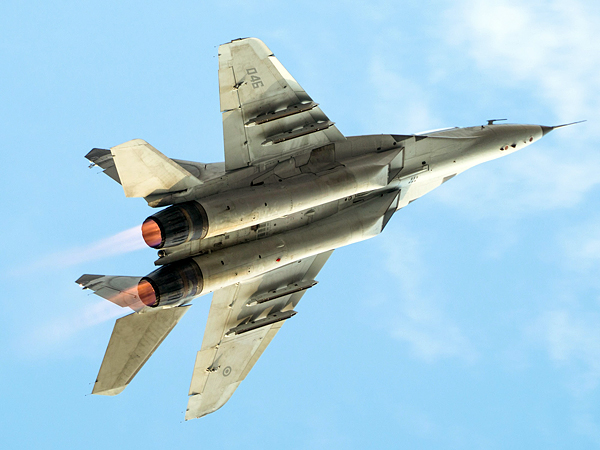 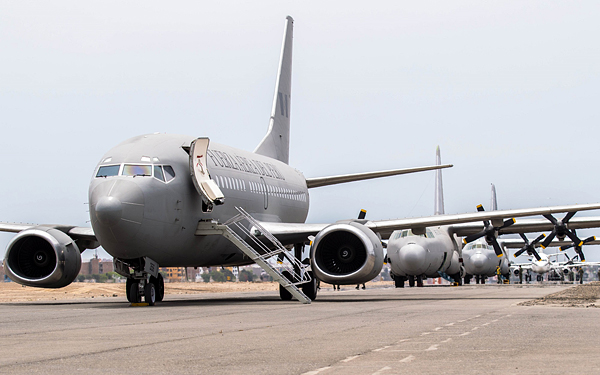 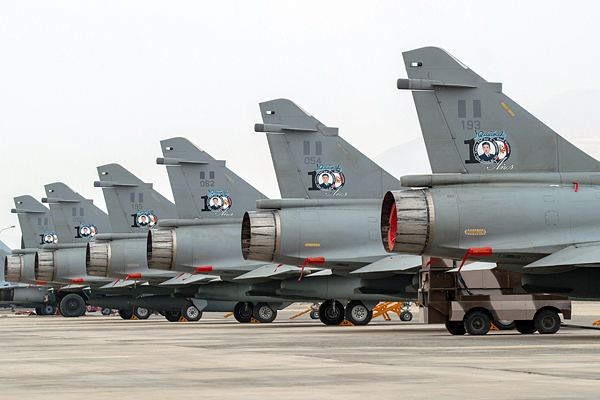 History
The earliest roots of the FAP can be traced back to 1910 when the Liga Nacional Pro-Aviación was formed. This resulted in a first flight in January 1911. The first tactical flight, with a Bleriot XI, was realised in 1915 and by 1916 officers were sent to Argentine for flight training. The Liga formed the Escuela de Centro de Aviación and, equipped with Caudron G-3 aircraft, flight training became a real possibility in Peru. January 1920 saw the constitution of the Cuerpo de Aviadores Navales (at Ancon harbour) and, as in many other countries in those years, the civil Centro de Aviación was soon amalgamated with the military initiative to form the Escuela de Las Palmas. Officially named the Escuela de Aviación Militar "Jorge Chávez" on November 27th 1923, the base still holds the military flight school today. Towards the end of the nineteen twenties, the military organisation was streamlined into the Cuerpo de Aviación del Perú by consolidating both naval and army flying activity under the ministry of naval affairs and aviation.

The thirties saw plenty of action for the juvenile air wing. Vought Corsairs and Curtiss Hawks were employed in the conflict with Colombia in 1933. Later on, Escuadrón de Aviación No.1 was formed at Chiclayo; equipped with an interesting assortment of aircraft types, such as Caproni Ca-111, 114, 135, Potez 39A-2, Douglas-Northrop 8A-3P, and North American NA-50. The Museo Aereo FAP proudly keeps sole survivors of the latter two types at Las Palmas airbase. By early 1938 the air wing was renamed Centro Aeronáutico del Perú. Three years later the air wing saw action again, this time with another Northern neighbour: Ecuador. During that conflict capitán CAP José Abelardo Quiñones González was killed in his NA-50 during an air raid on Quebrada Seca in Ecuador. He is patron of the FAP ever since, and Chiclayo airbase - which played a pivotal role in those early years of the FAP - is named after him. Furthermore, his sacrifice is honoured by celebrating the Day of the Air Force each year on july 23rd. Although the 1941 conflict with Ecuador resulted in the creation of a department of aviation, separate from the naval department, it was not until July 18, 1950 before the Fuerza Aérea del Perú, as we know it today, was formed.

FAP's jet age started in the mid-fifties with various US and British aircraft types, the first jet being the T-33. From the late fifties, and in the course of the sixties and seventies, T-33s, Sabres, Hunters and Canberras formed the backbone of the FAP, of these the latter is still active today. An interesting era started late 1975 with the arrival of the first of many Soviet aircraft types, a Mi-8T helicopter. The modernisation of FAP was accomplished by acquiring Mi-8 and Mi-6 transport helicopters, An-26 and An-32 transports and Su-22 fighter-bomber aircraft. Combined with the arrival of aircraft such as the C-130, An-72, Bell 205, Mirage 5 and A-37, the FAP turned into a varied air arm, not dependent on one single supplier of hardware. The air force was blooded again in the 1981 and 1995 conflicts over the Cenepa with Ecuador. Several FAP aircraft were downed by anti-aircraft artillery or FAE aircraft, among which were an A-37, two Su-22s and some Mi-8 helicopters.

Partly because of this limited effectiveness in combat, scores of more modern aircraft types were taken on strength throughout the eighties and led to the introduction of the Bo105, Bell 212, Mi-17, Mi-25, Schweizer 300, MB339, EMB312, Zlin 242, Mirage 2000, Su-22M-2, MiG-29, Su-25 and C-26. Drawback of this variation is the effort it takes to maintain the whole fleet. With maintenance troubles for the most recent Russian types, a limited transfer of knowledge on the Mirage 2000, budget restraints leading to a forced sell out of aircraft, and a lack of funds to acquire spare parts. That is why the efforts are now aimed at getting the available assets more serviceable again, rather than acquiring more aircraft. To strengthen the anti-insurgent and anti drug-trafficker operations, some brand new Mi-35s and Mi-17s were acquired recently. 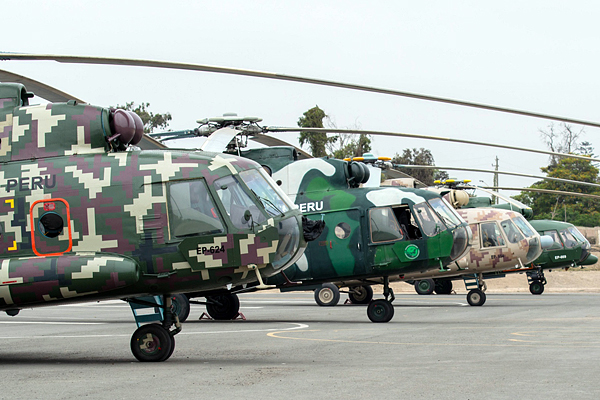 The army aviation element of the Peruvian armed forces is relatively juvenile. Although the army administered the early naval aviation for a short period of time, true army aviation only started in 1973 when the air element of the EP was formed. The first helicopters were French Alouette IIs, but after that the influx of Russian types significantly boosted the force. Many, many Mi-8 and Mi-17 helicopters arrived. Nowadays, the air arm is matured into a varied force capable of performing several tasks. The nineties were instrumental in achieving this. Many new types were taken on strength, both helicopters (like the A109K attack helo, the Enstrom F28 training chopper and Mi-26 heavy lift helicopter), and fixed wing aircraft (the An-28, An-32, L-410, IL-103 and Beech 350 to name a few). Latest acquisitions are some Ce152/172 training aircraft, Mi-171 helicopters, a single Beech 1900 and Ce208. The air element is organised into battalions like all other assets of the army.

History
Naval aviation in Peru started with by forming the Cuerpo de Aviadores Navales de la Armada Nacional in january 1920, although some pilots gained their wings in Argentina before that. The fledgling force had a hydra-aviation start when it received Curtiss Seagull aircraft from the US. It was appropriately renamed Servicio de Hidroaviación de la Marina del Peru in 1924. The first unit to be formed in 1929 with regular aircraft was the Escuadrón de Reconocimiento operating DH.9 aircraft from the 1920 born base at Ancón, North of Lima. The early naval air force was short-lived and merged with the army shortly after the arrival of the DH.9s.

It was not until 1963 before a lasting naval air arm was established by forming the Servicio Aeronaval de Armada del Perú. The sixties saw the introduction of some light helicopters and transport aircraft in the form of the Bell 47, C-47 and Piper Aztec. Slowly gaining momentum, the force, now named Servicio Aeronaval de la Marina Peruana gained its own training capability by the late sixties and early seventies with the introduction into service of the T-34 and some Cessnas. But real progress was made from the mid-seventies when the Grumman Trackers arrived, giving the servicio an anti-submarine capability. Furthermore, Fokker maritime surveillance aircraft and shipborn helicopters like the capable and armed Sea King and Bell 212 arrived completing the small but relatively potent force during the eighties. The nineties saw the demise of the Tracker that served the navy well, but also meant more modern types were taken on strength instead. The Beech 200 surveillance aircraft, the An-32B transports and the Mi-8 and Mi-17 assault helicopters joined the Fokkers. Four former Royal Netherlands Air Force F60 aircraft augment the original F27s since 2010. The helicopter fleet consists of various AB212 and Bell 206s, Enstrom F28 which were a bit ill-fated, as well as Sea Kings, more of which were acquired second hand in 2011.

Nominally a part of the Marina del Guerra, the coast guard has its own aerial assetts. Although it is thought that the aircraft of the navy are used for coastal patrols aswell.

Peru has a police force air wing consisting of helicopters but also fixed wing aircraft. The main base is at Lima-Callao although many detachments are kept. Controlling unit is DIRAVPOL, a special directorate within the police organization.