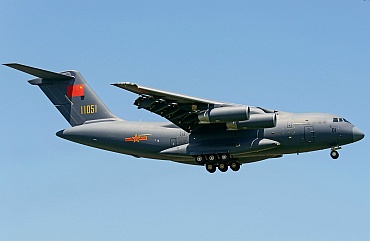 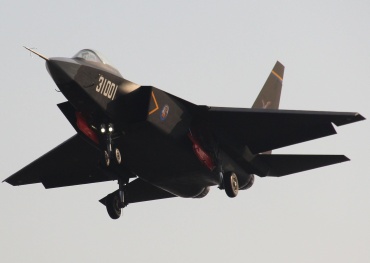 With the J-20 and this J-31 China is currently testing two Next
Generation stealth fighter designs.

Excavations have shown that the Homo Erectus lived in China about one million years ago. Airplane relevant history however started at 12 March 1912 when the almost 400 years of Qing Dynasty came to an end and a provisional government of the Republic of China was established in Nanjing. Effectively the country became ever more in the hands of Warlords, which was countered by the establishment of a Soviet assisted Communist Party of China (CPC). From 1925 the Nationalist Party (Kuomintang, KMT) seized control from the warlords in the South and Central China and from 1927 also ousted the Communist Party from this region. From 1934 the CPC started the Long March soon under the command of Mao Zedong.

Although the two parties were at the same side fighting the Japanese invasion between 1931 and 1945, the CPC continued to force the Nationalists further south after the Sino-Japanese war had ended. In 1949 the remaining KMT forces under the command of Chiang Kai-Shek fled to Taiwan and the People's Republic of China was proclaimed on 1 October 1949 with Taiwan and some outlying islands of Fujian being regarded as rebellious provinces still to be conquered.

Flying in the newborn Peoples Republic received a kick-start in 1951 in the Korean War with the Soviet Union delivering fighter and bomber aircraft including over 1000 MiG-15. Continued deliveries stopped abruptly in 1960. In this period production of aircraft came into full swing with about 780 J-5s (MiG-17) and over 3000 J-6s (MiG-19 versions) to name a few. Mid 60s "indigenous" designed aircraft like the J-7 (MiG-21 version), J-8 and Q-5 (MiG-19 derivative) saw the first light of day.

One of the achievements of the Cultural Revolution (1966-1970) was that not only the armed forces lost all people with any education, but also that aircraft quality levels dropped to sub-zero standards and production of aircraft became out of the question. It lasted until the mid '80s until more advanced versions of existing aircraft types started to appear.

The armed forces are in the midst of a massive modernization in which old airplanes are discarded in favour of modern ones on the basis of quality instead of quantity. In 1982 John Andrade in his book "Militair 1982" estimated the number of active aircraft at about 4750. Current estimates come close to 3200 that is also shown in the number of divisions that reduced from 50 in the heydays to about 32 nowadays. Major reductions were announced in 1982 and 1998 and also in 2004 further reductions were announced.

The turn of the century saw a major replacement program where obsolete front-line aircraft were replaced by new generation derivatives like new J-7, J-8 and Q-5 versions. Also some Su-27/Su-30 aircraft were introduced. Only a few years later, by 2010, nearly all old generation fighters have gone and many Air Force and Navy regiments now fly modern fighters like J-10, JH-7A and J-11 derivatives, with new versions to come. In a suppprise move early January a new 5th Generation Fighter J-20 made its first flight. The bomber force is a decade away from flying the H-5 and is now flying modern H-6 aircraft, although the airframe is stll based on the vintage Tu-16.

A Rapid Deployment Force is visible as many fighters now have in-flight tanking capability and starting 2014 the availability of Il-78 tanker aircraft complementing H-6 tanker versoins. Also, modern warfare practices were introduced relatively recently with the introduction of several special equipped Y8s for AEW&C, AWACS, ELINT missions to name a few and the Il-76 AWACS. Also, dedicated helicopters for the CSAR missions were not seen before.

The last element of the armed forces where old aircraft could be enjoyed is surrendering to modern times. Training has been modernized with the JJ-7/Q-5J replacing old JJ-6 aircraft with the operational regiments and the JL-8 having replaced the JJ-5 with the training regiments. Only initial training is still done by the very vintage CJ-6 aircraft, although at the 2010 show at Zhuhai the first CJ-7 replacement aircraft was first shown to the public with an expected order book of about 300 aircraft. The army has seen a massive expansion with Mi-17 and Z-9 helicopters and with earlier attack helicopters already replaced by dedicated WZ10 and Z-19 helicopters.
To complete the modernization picture of course the air force is also introducing UAV flying. This is outside the scope of this website however.

The armed forces of the People's Republic of China (PRC) are composed of the People's Liberation Army, the Chinese People's Armed Police Force and the militia. The Central Military Commission (CMC) of the PRC directs and assumes unified command of the nation's armed forces. The active components of the PLA are the country's standing army, consisting of the Army, Navy, Air Force and the Second Artillery Force, whose main task is to conduct operations of defence, and assist in maintaining social order.

Through the General Staff Headquarters, the General Political Department, the General Logistics Department and the General Armaments Department, the CMC exercises operational command over the whole PLA and leadership for the development of the PLA. For day-to-day operation seven Military Regions, "da junqu" (Shenyang, Beijing, Lanzhou, Jinan, Nanjing, Guangzhou and Chengdu) exercise direct leadership over the Army units under their command. In time of war, or any large scale military exercise, all aspect of operation will be control by a CMC WarZone HQ. The WarZone HQ will command all assets, as it seems fit, including elements from a different MRs.

Full details have yet to be clarified.