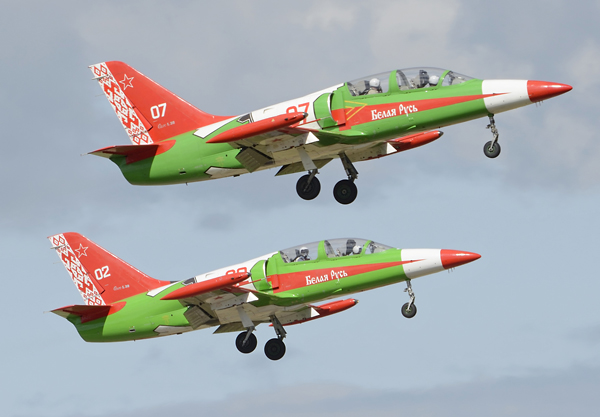 The Republic of Belarus Air Force was formed in January 1992 taking over most of the inventory of the Soviet Air Force 11th Air Defense Corps and the 26th Air Army. Within the newly formed Commonwealth of Independent States (CIS) Belarus created an Air Force that was considered the best-maintained and organised force within the Commonwealth.

Upon the transfer of the 11th Air Defence Corps and the 26th Air Army to the Republic of Belarus the Air Army was equipped with a large variety of aircraft. It is estimated the Air Force had approximately 286 aircraft and 310 helicopters within its operational inventory. Almost immediately the aging aircraft in the inventory were withdrawn from use to save costs. The number of aircraft and air bases however, have been significantly reduced over the years to be able to cope with budget limitations as a result of being an independent force. Bases were closed, leaving just four main operating bases, Minsk-Machulishchy, Baranavichy, Lida and Osovtsy. Also, the 21st century saw the modernisation of a number of the inherited MiG-29 (izdeliye 9-13) and the withdrawal from service of the Su-24 and Su-27 in 2012.

Belarus has always been aviation minded. The DOSAAF is very active and provides youngsters with the opportunity to obtain their driver's license, and engage in sports and flying activities. The DOSAAF is regionally organised. Six airfields are used, Bobruisk-Syckava, Brest, Mahilëw-Novae Pashkava, Minsk-Lipki, Rahachow, and Vitsyebsk-Novakukavyachyna. Each airfield has some different specialisations like soaring or parajumping.

The fleet of aircraft was largely inherited from the Soviet era but is kept in immaculate condition. DOSAAF operates the An-2, Mi-2, Yak-52, Yak-55, Wilga 35A glider tugs and, Jantar and Blanik gliders. In the summer the airfields are pretty busy, not on all days though. In the winter the gliders, Wilgas an Yaks are kept in storage so it seems.

Also mirroring the former Soviet Union, Belarus has instated its own fleet of Emergency Situations aircraft. Most notable aircraft in their fleet is the mighty Mi-26 helicopter. The MChS kept operating these after the air force ceased operations with them and they are often used for heavy hauling jobs that catch media attention. Other aircraft include a diminishing fleet of An-2s and Mi-2s, some Il-103 trainers, AS355NP and, Mi-8MT helicopters. The AS355s used to be operated by the Border Guards but were inducted by the MChS.

Main base is situated at Minsk-Lipki, co-located with the DOSAAF that moved there from Minsk-Baravaya. Another important hub is Vitsyebsk-Vostochnyy.