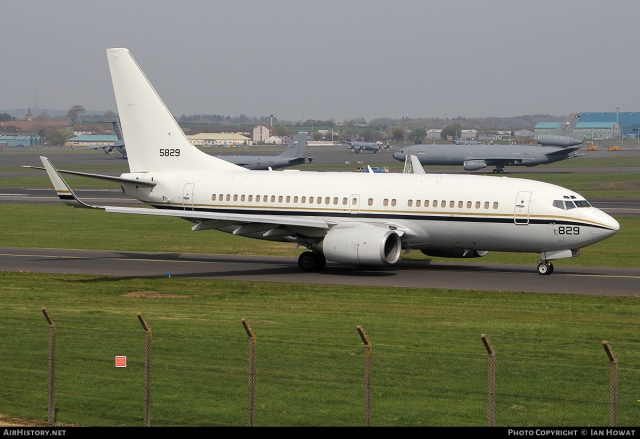 The medium transport aircraft squadron of the USMC is based at NAS JRB Fort Worth (TX) and is assigned to the command of Marine Aircraft Group 41 and the 4th Marine Aircraft Wing. The squadron operated the C-9B Skytrain IIs before, and had US Navy C-40As on loan for their tasks while waiting for the deliveries of 170041 and 170042.

N745A was delivered to Saudi ARAMCO Aviation on 21 November 2001. The aircraft was operated for some seven years with ARAMCO as N745A before it was transferred to the UMB Bank NA Trustee on 25 April 2018. On 5 September 2019, it was sold to AAR Aircraft & Engine Sales & Leasing Inc. It is unknown to Scramble when the aircraft was transferred to Boeing for conversion to C-40A.

In September 2017, Scramble reported about the procurement by Naval Air Systems Command (NAVAIR) of two C-40A Clippers for the US Marine Corps in a USD 152.5 million deal with Boeing. At that time, the first Clipper was expected to be delivered in September 2019, with the second one in August 2020. Apparently, some massive delays occurred, possibly due to the 737 MAX misery, as well as awaiting the NAVAIR budget to fund.

On 21 March 2019, a draft request for proposals was again published that refers most probably to this contract. The C-40As (a Boeing 737-700 with winglets and the wings and landing gear from the larger and heavier 737-800) will be delivered in an all-passenger configuration that can carry up to 121 passengers and an all-cargo configuration of eight cargo pallets, so they can meet VMR-1s mission: provide rapid-response airlift for the Corps.

The USMC pilots of VMR-1 have already made their transition from C-9B to C-40A. They did this with the Fort Worth-based C-40 squadron, VR-59 Lonestar Express (‘RY-xx’).

Photo by Ian Howat (just illustrative for the type)