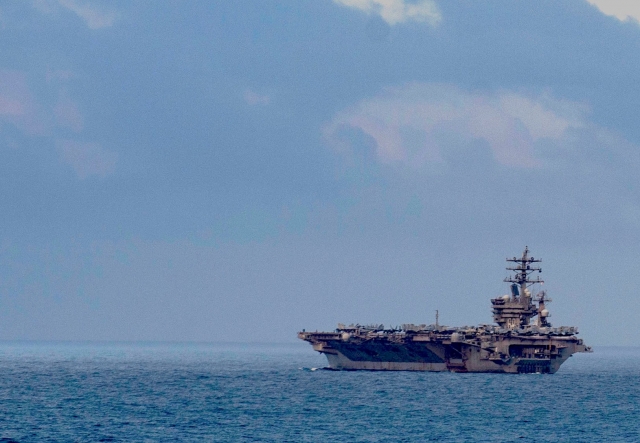 The Dwight D. Eisenhower Carrier Strike Group (IKE CSG) deployed on 19 February 2021 for the second time in a year. USS Dwight D. Eisenhower (CVN-69) wrapped up her final training and certification exercises and is deploying again after setting out for an earlier deployment in January 2020.

The last deployment of the IKE CSG was surrounded by the start of the COVID-19 pandemic. It did not reached the ship and its sailor but it shaped IKE’s 2020 deployment: chiefly, port calls were canceled. Sailors on Eisenhower were at sea for 206 consecutive days until they came home and were finally allowed off the ship.

The new deployment is surrounded by the new US Navy standard operating guidance with sailors largely only come in contact with those in their work departments and in their berthing areas, with other interactions in the mess or lounge being ditched in favor of sailors getting their food and drinks to-go and eating in their living or work spaces. Ships also conduct random COVID testing meant to catch any asymptomatic cases before they could have a chance to spread throughout the crew. Carrier embarks for press and other visitors are nearly impossible and rotations of personnel are drastically brought back, this all to prevent a COVID outbreak on board.

The exact plans for the CVN-69 cruise are (of course) not revealed but the US Navy reported that the strike group plans time working with European allies. Scramble assesses that most probably, the IKE will continue its route through the Mediterranean Sea, Suez Channel, Red Sea and Gulf of Oman towards the North Arabian sea and Persian Gulf as there are currently no US aircraft carriers in the Middle East area of operations since the deaprture of USS Nimitz (CVN-68) in the January 2021. Since May 2019, the US Navy  has tried to keep a carrier presence in 5th Fleet to deter Iran from acting aggressively towards its neighbors or threatening merchant shipping in nearby waters. USS Nimitz (CVN-68) with CVW-17/"AA-xxx" is currently on its way home and sailing near Hawaii (it started its deployment in May 2020), while USS Theodore Roosevelt (CVN-71) with CVW-11/"NH-xxx" is operating in the Philippine Sea. USS Carl Vinson (CVN-70) and CVW-2/"NE-xxx" are underway off the coast of Southern California. Later this year, the Vinson CSG will deploy for the first time with the F-35C Lightning II and the CMV-22B Osprey.

USS Gerald R. Ford (CVN-78) got underway on 28 January 2021, for an independent steaming event (ISE) as part of its eighteen months of post-delivery trials. In the meantime, the US Navy awarded Huntington Ingalls Industries’ Newport News Shipbuilding a USD 3 billion contract for the USS John C. Stennis (CVN-74) refueling and complex overhaul (RCOH) on 19 February 2021. JCS work should be completed by August 2025. USS George Washington (CVN-73) is currently undergoing its RCOH, which began in August 2017 and is expected to be complted by 2022.

The USS America (LHA-6) Amphibious Ready Group (ARG) with te 31st MEU is underway in the Philippine Sea while the USS Makin Island (LHD-8) ARG with the 15th MEU is in the North Arabian Sea with elements in the Persian Gulf. Photo by US Navy